Exit-plan consultants use trade acumen to aid others 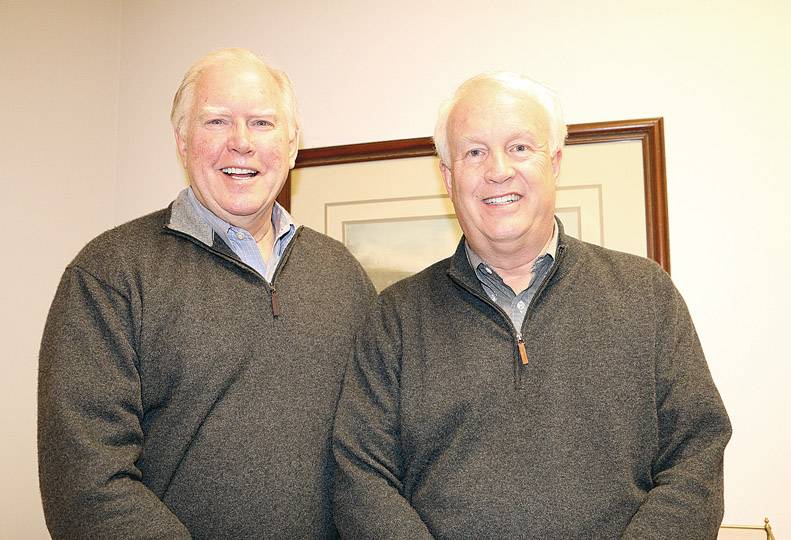 - –Katie Ross
Ray Lawton and Ned Rumpeltes, both of whom have extensive business management backgrounds here, say many business owners don’t have a plan for transitioning or selling their business.

Lawton and Rumpeltes, who both have significant business backgrounds here with Spokane-based Lawton Printing Inc. and Inland Pacific Stamp, respectively, met in 1983 in the first class of Leadership Spokane. After they retired from their own companies, the two decided to join together to help other owners transition out of their businesses.

Lawton says the business’s legal address is at 4111 E. Mission, also the headquarters of Lawton Printing, where he still keeps an office.

Rumpeltes keeps an office on the second floor of the Eldridge Building at 1325 W. First. The two usually meet with a client at the client’s business, he says.

Rumpeltes says he and Lawton are the firm’s only two employees.

“Ray and I have had a lot of employees, and at our age, we decided not to have them anymore,” he says.

Rumpeltes and Lawton have, on average, two to four clients at a time, they say, and have had 12 total since they started the firm.

Lawton’s background is with Spokane-based printing company Lawton Printing and the family’s other company, File EZ Folder Inc. He was the third generation of the family to run the companies, he says.

“When we transitioned our business to the fourth generation, it just turned on a light for that I would like helping people in this particular arena,” he says. “We transitioned (the businesses) four times and probably experienced doing all the wrong things. I thought there was a lot I could pass on.”

In addition to his family’s experiences, Lawton says he saw a lack of planning in many companies throughout the printing industry as a whole.

“What I saw at the national level was that most of my contemporaries … didn’t have an idea what to do with their business,” he says.

Rumpeltes, meanwhile, also was running a family business: He acquired Inland Pacific Stamp from his father and says he grew the business through the acquisition of six smaller companies on the West Coast.

“I saw the same problems Ray did,” he says. “No one had any transition planning. Mostly, I was able to buy those businesses because some event had happened.”

Rumpeltes sold his business in 2004 to Harwood Heights, Ill.-based Cosco Industries, and Cosco in turn was acquired by North Mankato, Minn.-based Taylor Corp., which Rumpeltes claims is the largest privately-owned printing company in the U.S., with about $2 billion in sales annually.

After they both stepped away from their businesses, the duo began to realize there was a need for transition services here, Rumpeltes says.

“When we talked to different people, no one was doing the whole thing,” he says. “Lawyers, accountants, financial planners — they were doing parts of it.”

Lawton agrees, saying, “What we’ve found is there are people who do different parts of what we do, but we haven’t run into anyone in Spokane that does it all.”

Lawton says that there are several core questions that come up when someone wants to sell or step down from their business. Does the client need money for living? How much does the client have now? What can the company be sold for? What does the owner want to do with the business?

“And then, there are the social issues,” Lawton says. “That’s one of the most difficult for families. If only one of the children is involved in a business, how do you treat the others fairly? We help with that.”

These social issues, Lawton says, can cause big problems for families trying to shift a business to the next generation.

Rumpeltes says he thinks that social issues occur in nearly every transition.

“If they’re not selling to a third party, the social issues are always there,” he says. “For example, if a kid is taking over the business, they might ask, ‘When is my dad going to retire?’ Also, is the kid capable of running the business? All those things can be put on the table.”

Even when a business is being sold to a third party, there can still be social issues, Rumpeltes says, if there are family members or employees who want to stay with the company.

Lawton says the two don’t provide specific answers for clients, but rather lay out the options and make sure the clients understand them.

“We help them choose what’s right for them,” he says.

After an initial consultation, which is free, the two decide how many hours they think they’ll spend working on the transition, and charge the client a flat fee for their services.

“We come up with a set price to give to the client,” Rumpeltes says. “And we stick with that price no matter what the hours end up being.”

Rumpeltes says the firm’s fee can run from $10,000 to $30,000, depending on the amount of work involved in the transition. Clients can pay monthly, he says.

He says he believes one of the things that makes the business unique is its information-gathering process.

“We have an actual process we take people through, which really is designed to get all the information out,” he says. “The owners and the people the business is being transitioned to have decisions to make based on those facts.”

Rumpeltes says the two provide the client with a written document outlining the transition procedure.

“We call it a ‘roadmap to transition,’” he says. “Usually it’s a five-year plan.”

When the two decided to start their consulting firm, Lawton says, they heard about the Business Enterprise Institute, in Golden, Colo., which provides training for exit-planning consultants.

Rumpeltes says, “They provide us with the software we use for the roadmap; they taught us the process.”

To understand what sort of transition a client is looking for, the two use another tool from the institute: a booklet of 40 questions, called an exit-planning workbook.

The book contains questions about the current state of a client’s business, when they would want to retire, and more.

“That tells us how prepared the owner is to go through this process,” Lawton says. “Then we show it to the owner and go over it with them.”

The goal of the initial consult, Lawton says, is for the two to sit down with a client and determine what the client thinks would be a successful transition.

The adviser groups, Lawton says, generally are made up of an attorney, a certified public accountant, a financial planner, and an insurance expert, all with transition experience. Rumpeltes and Lawton interview all the adviser group members, and then set up a meeting with the client.

Rumpeltes says, “That adviser group will meet with the owners, with us there facilitating those meetings.”

He also says the two will occasionally recommend an attorney or other adviser group member, if the client doesn’t have any with business transition experience.

“Often the insurance guy won’t charge, and the financial planner often won’t charge,” he says. Most of the attorneys and CPAs charge by the hour, he says.

Rumpeltes says, so far, the company hasn’t had a client back out of a transition.