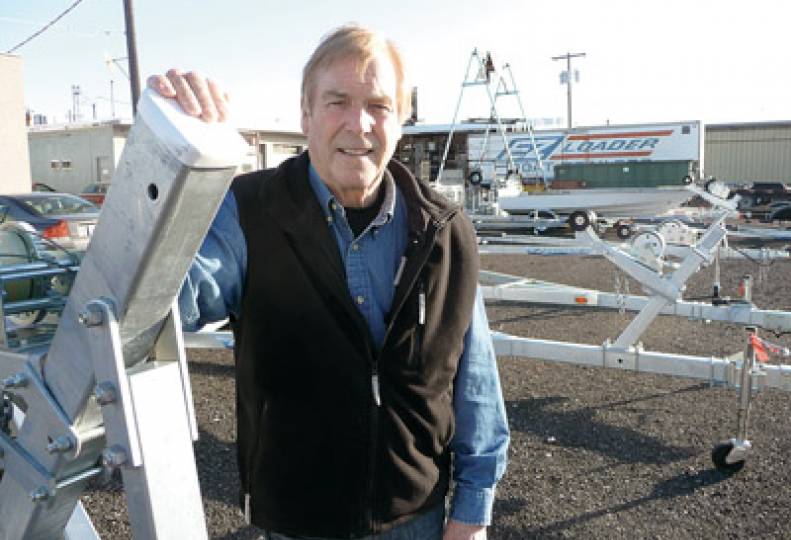 -—Staff photo by David Cole
Randy Johnson, owner of EZ Loader Boat Trailers, says the long-time Spokane-based company started building utility trailers and motorcycle trailers to diversify itself as the marine industry has been in the midst of a downturn.

With the U.S. marine industry in a downturn, longtime Spokane manufacturer EZ Loader Boat Trailers Inc. has taken steps to diversify by winning regulatory approval to sell its boat trailers throughout Europe and by launching a line of utility and motorcycle trailers in the U.S.

Johnson says the company now only has to build to one standard to sell boat trailers in Europe, compared with the past when it had to build to each country's standard.

"Building to one standard is really the only way for us, manufacturing over here in the U.S., to be competitive making boat trailers for and selling to the European market," Johnson says.

Meanwhile, EZ Loader, which has been hit hard by the downturn in the U.S. boating industry, began manufacturing and selling utility trailers, landscape trailers, and other specialty trailers early last year, and Johnson says sales of that new line should give the company a boost.

The company makes those non-marine trailers at its plant in Midway, Ark., and for now is marketing them only within a few hundred miles of that plant, due to transportation costs.

The company has been making boat trailers since 1953. It now makes utility trailers, with wood or metal floors, to haul tractors, cars, lawn mowers, golf carts, and all-terrain vehicles, he says.

Johnson says any additional sales from the utility and motorcycle trailers will be welcome, and what he calls "plus business."

He adds, "It takes a few years to grow (that new segment of business). And there's a lot of business competition."

Bill Lang, vice president of EZ Loader, says utility and motorcycle trailer sales accounted for less than 1 percent of the company's overall volume in 2009, but the company is shooting for those trailers to make up 3 percent of its volume this year.

EZ Loader is limiting its marketing of the new trailers to the region around its Arkansas plant because it can price them more competitively there than in other parts of the country because of transportation costs, he says.

Eventually, though, says Lang, "We want to sell the utility trailers nationally—that's our goal."

The company needs to figure out a way to transport the utility and specialty trailers more efficiently to distributors and retailers. Specifically, it needs to figure out how to stack them so it could haul more units at a time, and also to coordinate the transportation so that it can avoid moving empty containers back to the plant after its trailers have been delivered to a location, Lang says.

For the European market, EZ Loader modified its boat trailers slightly, with different signal lights and braking systems than its U.S. models, and those trailers had to receive approval to be sold under new European Union rules, Johnson says.

Says Lang, "We have sold trailers to Europe in the past, but with the new consolidated laws for all the (European Union) members, the trailer will now need to be 'type approved.'"

With that approval, the trailers can legally haul boats in more than 20 countries there, he says.

Yet, Johnson says, "It took us a year and a half to get ready to sell to the European market," which he says was a frustrating and lengthy process.

EZ Loader also sells boat trailers in other parts of the world, including Japan, the Middle East, Asia, Australia, and Africa. Lang says international sales, not including those in Canada, account for about 10 percent of the company's overall sales.

Lang says, "We are projecting an additional 5 percent sales for Europe with our type-approved trailer."

He says that in 2007, the company's best year ever, it had sales of $71.7 million, and EZ Loader had been seeing consistent sales gains of about 7 percent a year for several years earlier.

"Business was really good until August 2008," then sales in the industry and for EZ Loader sank, he says, adding that the company's 2009 revenues were down 40 percent from 2008.

The company has had to cut employee numbers and reduce the number of hours the remaining employees worked, Johnson says.

It currently has 265 employees nationwide, down from more than 400 in 2007. Its Spokane-area operations, which also include a 60,000-square-foot plant in Airway Heights where trailer parts are galvanized, currently employ 175 people, Johnson and Lang say.

Early last year, EZ Loader cut by about a third, or $3.5 million worth, the inventory of parts it keeps on hand to build boat trailers, Lang says.

With the slumping marine industry expected to show signs of improvement this year, and EZ Loader's new product lines and potentially greater sales in Europe, the company is budgeting for a 10 percent increase in sales for the first part of 2010, and for 15 percent growth in the second half of the year, Lang says.

In all, EZ Loader makes about 250 boat-trailer models, including some for pontoon boats and personal watercraft. Company officials decline to say how many boat trailers EZ Loader makes a year these days, but back in 2003, the company said it was on pace to manufacture 50,000 trailers that year.

It says it invented the first all-roller boat trailer and was granted a patent on its design in 1964. Roller trailers, in which a boat or watercraft sits on a series of rollers attached to the trailer frame so it can roll on and off the trailer, are especially useful where boat ramps are at a gradual pitch in shallow water. The company's "bunk" trailers, on the other hand, function best when used on steeper ramps because the boat sits on padded rails, and essentially "floats off" and "floats on" the trailer when it's being loaded or unloaded, the company says.

While most of the company's trailers have steel frames, EZ Loader also makes aluminum-frame trailers, which have become a popular choice in both fresh- and salt-water conditions, as the corrosion resistance of the aluminum works well in the environment, it says.

EZ Loader's main Spokane complex, at 717 N. Hamilton, near Gonzaga University, includes five buildings with more than 80,000 square feet of floor space. The buildings sit on both sides of Hamilton Street there, and two of the structures are linked by an enclosed parts-moving system that stretches across Hamilton, which EZ Loader uses to transfer trailer parts from one part of the plant to another. There's a walkway inside the enclosed bridge.

EZ Loader uses distributors across the country and internationally to sell its trailers.