Next-gen leadership said to be key to sustainability 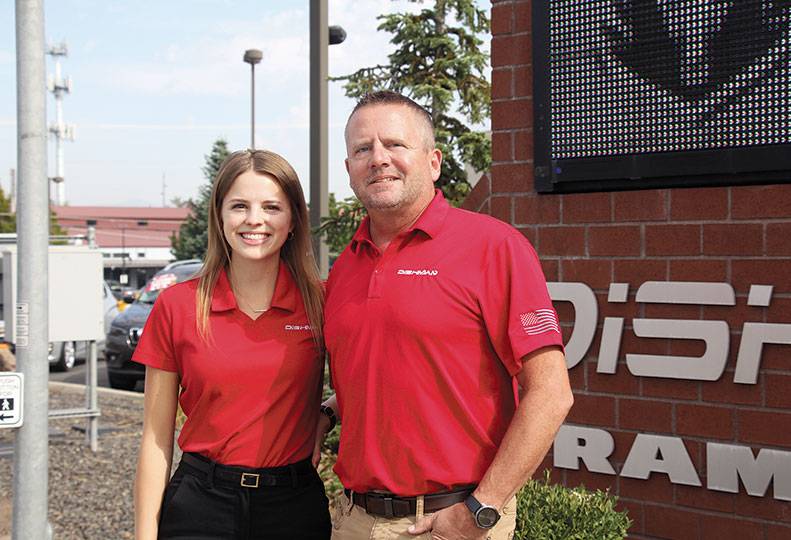 Two Spokane-area auto dealers say they’re prepared to remain family owned for generations to come, despite current challenges in the auto industry and a growing volume of dealership acquisitions here and nationwide.

Mark Waltermire, president of Spokane Valley-based Dishman Dodge Ram Chrysler Jeep, says the company receives serious offers by phone and mail on a regular basis from auto brokerage firms seeking to purchase the dealership. He says he snubs those offers, however.

Kristin Goff, president of Spokane-based Wendle Motors Inc., says the business has received fewer offers this year than in 2021, although she similarly ignores solicitations she receives.

Auto dealerships are receiving high valuations, worth an average of $25 million for a single location including real estate and other assets, according to the Q2 2022 Haig Report compiled by Fort Lauderdale, Florida-based financial services company Haig Partners LLC.

The auto industry has been unpredictable in recent years with ongoing delivery issues, chip shortages, and low inventories, yet dealership acquisitions have grown 3% from 2021, the Haig report shows.

Both Waltermire and Goff say succession planning has been their strategy to continue independent ownership in this climate, instead of entertaining offers to sell their respective family-owned companies.

“I’m the third generation. My grandpa started it, and my mom ran the dealership for quite a while, and since they’ve both passed, my brother and I run the dealership, and we have a succession plan in place to keep it in the family,” says Waltermire.

He adds, “That succession plan is huge, not only because it makes employees more comfortable, but … it’s nice to have a direction for the whole store.”

Goff says it’s likely that some of the companies that decided to sell their businesses experienced succession-related challenges in which no one was willing, capable, or able to step in to lead.

For other dealers, she says, “Some have chosen to sell simply because demand has been strong, and valuations are high, so for them it’s purely a financial decision.”

Goff credits her father, Dick Wendle, for teaching her the importance of preparing a succession plan and says her two children are the next envisioned company leaders.

“We’re in a situation where our kids (Rylee Pulliam and Kolby Goff) are interested in running the business, so selling the business isn’t even a consideration, because we have many opportunities when it comes to succession planning.”

At Dishman Dodge, Waltermire says, “My niece (Cadee Pieroni) is involved in the dealership now, and she’s learning aspects of each department. She’s our future at this point.”

Waltermire says auto dealership valuations are at an all-time high and for dealers without a succession plan, purchase offers would be difficult to ignore.

Both Goff and Waltermire say benefits to the company and the community of remaining independently owned outweigh the challenges.

For example, finding new employees to replace retiring staff members has been a struggle for Dishman Dodge, Waltermire says, because the number of job applicants the business receives for new positions has been steadily decreasing.

“We’re fortunate to have a lot of longevity at our dealership, with managers and other employees that have been here 10, 20, or 30 years,” says Waltermire. “That’s a big advantage to be able to retain employees.”

Dishman Dodge has about 100 employees currently, he says.

For Wendle Motors, Goff says, “Overall sales are down, and it’s been challenging. Our inventory is much smaller, but it’s selling faster. The costs to carry (inventory) are less though, which has helped even things out.”

Waltermire says he has noticed inventory conditions are improving slowly, and manufacturer incentives are returning, which is an indication that production and new-car allocations have increased.

“We’re starting to see 72 months at 0% interest for Ram trucks and other aggressive incentives,” says Waltermire.

“Each month, we’re seeing more orders getting filled. Other manufacturers are still facing challenges, but things feel like they’re getting better,” she says.

“We also fund community services and invest back into the community,” she says. “And if it weren’t for the support of our customers and our community, we wouldn’t even exist. Giving back has always been a priority, and you also see that with a lot of locally owned businesses.”

He says he expects Pieroni to become more involved in those efforts going forward.

“We can direct our donations to the areas we want,” he says. “That’s been going on for so long I think there’s a customer base that’s relates that to the store, which helps our success.”