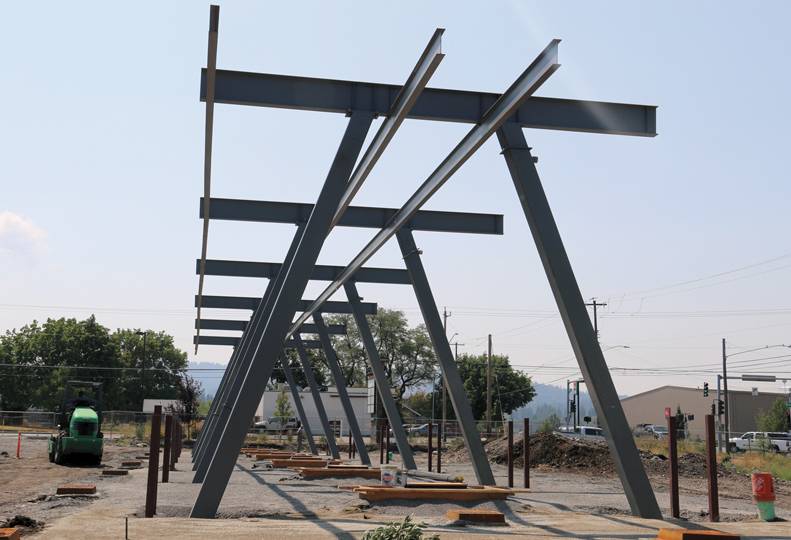 -Kevin Blocker
A new Amerimart is being built at the northeast corner of Broadway Avenue and Park Road, in Spokane Valley. The convenience store is expected to open by the end of September.

A pair of family members who operate gas stations in the Spokane area have plans to open two more of their independently owned Amerimart gas stations and convenience stores in the coming weeks.

Amerimart owners Dave Nagra and his cousin, Mike Nagra, plan to open a gas station and convenience store on 2 acres of land at 806 N. Park, on the northeast corner of Park Road and Broadway Avenue, in Spokane Valley.

The Nagras anticipate the gas station will be fully operational by the end of September.

Spokane County Assessor’s Office records show the Nagras, operating as S2S 1994 LLC, purchased the property, which includes the currently vacant Park Road Commerce Center, for $1.25 million in late 2018. The retail building totals a little more than 10,000 square feet of space. In addition to Amerimart, the structure will have space available for a few more tenants.

“We’re open to any kind of tenants so long as they’re not a competitor of Amerimart,” Nagra says with a laugh.

The Nagras also plan to open another Amerimart later this month at a former Mobil station, at 104 W. Second, which is at the northwest corner of Second Avenue and Browne Street, in downtown Spokane. They also own and operate an Amerimart at 7035 W. Seltice, in Post Falls.

In other gas station and convenience store transactions, Dave Black, CEO of Spokane-based commercial real estate brokerage NAI Black, recently assisted in negotiations on behalf of Spokane-based Divine Corp. to assume a pair of leases at former Cenex Zip Trip locations—one at 1712 N. Division, in Spokane, and another at 1421 N. Pines Road, in Spokane Valley.

The stores each occupy 3,000 square feet.

The transactions give Divine Corp. a total of 16 convenience stores in the Spokane area with another currently being developed by Black at the southeast corner of 57th Avenue and Palouse Highway, in the Moran Prairie neighborhood south of Spokane, he says.

“I’ve known the Divine family forever,” says Black, who still has his first car, a white 1965 convertible Ford Mustang that he bought from Divine’s founder Jack Divine in 1974.