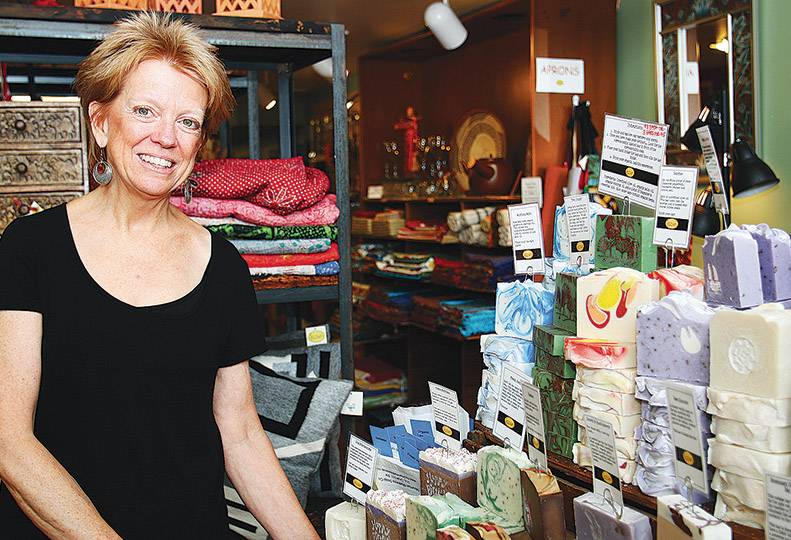 -—Judith Spitzer
Kim Harmson, Kizuri owner, says these handcrafted soaps from Mountain Madness, a Coeur d’Alene company, are one of her best sellers. 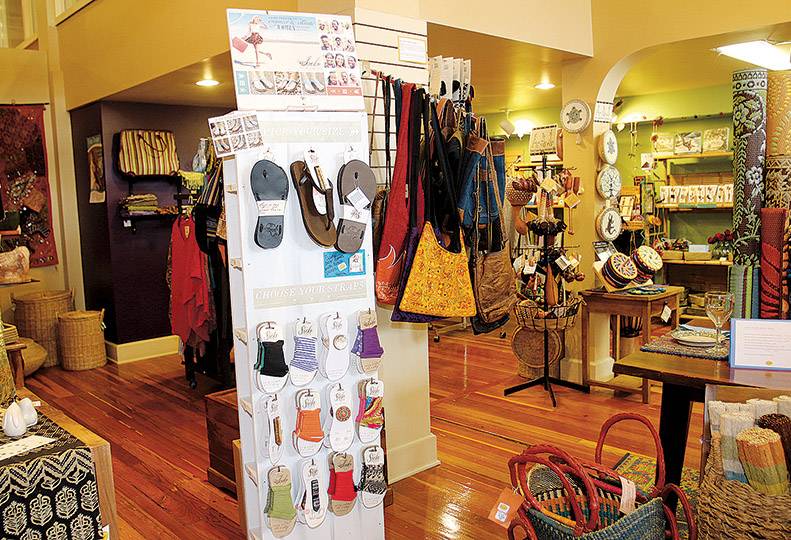 -—Judith Spitzer
Kizuri, located in the Community Building in downtown Spokane, carries a mix of items from local and regional artisans, and many from overseas suppliers in developing countries.

Kim Harmson, an early childhood educator for most of her career, opened Kizuri, a fair trade retail store in downtown Spokane, with absolutely no retail experience. What she did have was a strong belief in community and the fair trade movement.

Fair trade, Harmson says, is a way of conducting business based on economic and social justice. The word Kizuri, which means “good” in Swahili, was Harmson’s choice for the store’s name because “shopping at Kizuri is good for the planet and good for the people,” Harmson says.

“It’s a dynamic movement, a consciousness and the hope for a just and sustainable world,” she says.

Fair-trade retailers carry goods from artisan cooperatives and small farmers, and help to create sustainable economic development in some of the world’s lowest income regions, she asserts.

Kizuri is located in the Community Building, at 35 W. Main downtown, which building owner Jim Sheehan developed to house nonprofits. However, Harmson says her unique for-profit business plan appealed to Sheehan, and she has been in the space since she opened the store in 2008. Kizuri operates with community involvement, by educating people and giving back a portion of the store’s annual profits to the community. Harmson, who declines to discuss store revenues, says she works in the store full time, six days a week and has one part-time employee.

Running a retail business didn’t top the list of things she intended to do during her lifetime, she says. Nor was 2008 the best time to start such an endeavor. But when she heard that Global Folk Art, Spokane’s only fair trade store at that time, was closing its doors, she decided it was time to step up and open Kizuri in the same location.

After leaving the education field, Harmson worked for eight years for her good friend Denise Atwood, who owns Spokane-based Ganesh Himal Trading, a wholesale company that sells fair-trade artisan products from small cottage industries in Nepal and other international locations.

Harmson says Atwood encouraged her to open the store, and after talking with other fair trade retail vendors, she felt ready.

One of her first challenges was financing.

“I had no background in business,” Harmson says. “So I just started talking to people about my vision for the store.”

She says the first time she asked someone to invest she was “scared to death.” After receiving a positive response, she says it got easier and she started to feel that Kizuri wasn’t just her store, but rather that it belonged to the community. Eventually, she had 11 investors who helped her raise about $72,000 from low-interest, long-term loans. “I had planned to try to raise $100,000 so it was less than what I had projected in my business plan,” she says. “But it worked.”

“I said I’m going to do this, and it was just that spontaneous,” she says. “I’ve moved forward from there and I haven’t regretted it.”

Harmson says she had a lot of empty shelves to fill at the 1,100 square foot store when she opened. But her contacts with Ganesh Himal Trading paid off. Networking with other store owners and vendors led her to unique products and gifts.

She started with, and continues to carry, many products from Ganesh Himal Trading and has worked with wholesalers around the country for even more input on where to find products for the store.

Some of those products include furniture made from reclaimed wood, indigenous artwork, textiles, jewelry, accessories, and items intended to represent the cultural richness of more than 40 countries.

When choosing products, Harmson says, she follows fair-trade principles established by the international Fair Trade Federation. Those principles include:

•Developing transparent relation-ships that are open, fair, and respectful.

Harmson also travels frequently and says she looks for products that are “worthy of support.”

For the past four years, she has visited Rwanda with her husband, Jeff Harmson, who provides medical care through Healing Hearts Northwest, a Spokane-based nonprofit organization that performs open heart surgeries annually to individuals with rheumatic heart disease in Kigali, Rwanda.

While there, she says, she visited several women’s cooperatives. “I worked as a volunteer there, but I had three days of free time and went out into the villages to seek out fair-trade producers. Fair trade is so much about relationships. That’s one of the things that feeds my soul about it.”

“It was so heartwarming,” she adds. “Many of the women are widows, and most are infected with HIV. It’s devastating, but here they are rebuilding their self-esteem through community and relationships with other women, making a wage they can live on. They were so warm and welcoming and optimistic. It was life changing for me ... it really was. I plan to go back and spend more time with them and just sit down and … just see how we could work together.”

“Without their support, Kizuri wouldn’t (exist). I have so many regular people who shop at Kizuri first,” she says. “It’s a great community. Just by making that small commitment has a ripple effect around the world.”

Harmson says life today is a constant learning curve and, to stay viable, she has to keep discovering new products and producers.

Twenty-five percent of full-time artisans in the world are women, she says, and one of her main priorities is working with women’s groups, because so many women in developing countries are considered second-class citizens.

“Research shows that if women make a fair and livable wage, they take care of family, and the community changes on an organic level because of it,” she says. “They make sure there’s access to clean water, medical care, sending kids to school … especially sending girl children to school, which is not always the norm.”

Harmson carries many products from local and regional wholesalers as well.

The top three products in the store come from local wholesalers like Ganesh Himal Trading, she says. One of the top sellers in her shop is locally-crafted soap from Mountain Madness, a Coeur d’Alene producer that makes handmade, organic soaps and bath products. Another top seller is watercolor greeting cards by local artist Greg Pritchett.

Descriptions of Kizuri’s wares and the producers who created them are displayed alongside the items. Harmson also has plenty of stories about how fair trade is life-changing for the artisans who make them.

She carries bags made from Katmandu’s recycled tires, which means the tires are no longer being burned and polluting the air, she says.

“Tire burning was contributing to the horrific air pollution there,” she says. “The purses have been so successful that the company has put others to work to make the bags and is now sending people out around the country to get more used tires.”

“I want people to think about the impact they’re having on how they spend their money,” Harmson says. “Even a little bit makes a big difference and can make a big impact on child labor as well. I invite people to become conscious consumers and think about where products are grown and what conditions they were made under.”

Harmson makes time for public presentations about the fair trade movement in her spare time. She says she still feels like an educator. “There are still so many people who don’t have any idea what fair trade is all about,” she says.