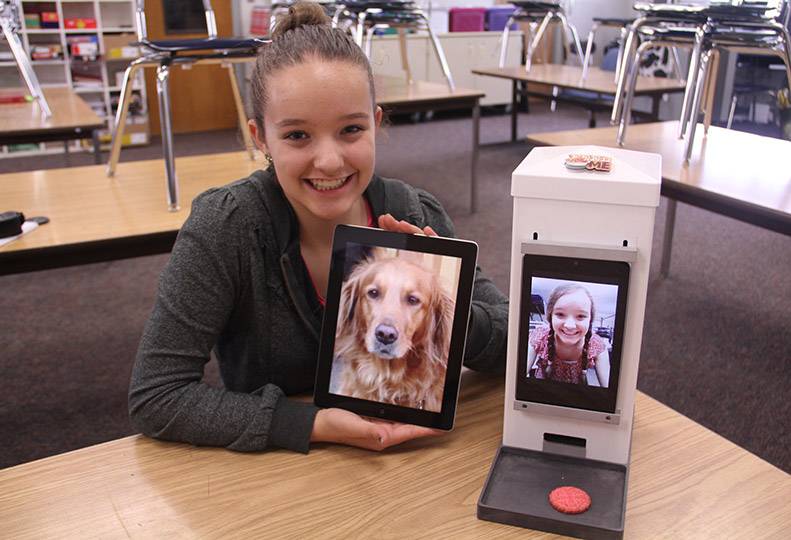 -—Staff photo by Jessica Valencia
Brooke Martin, 13, developed the iCPooch so that dog owners can see their pets and give them treats while away. 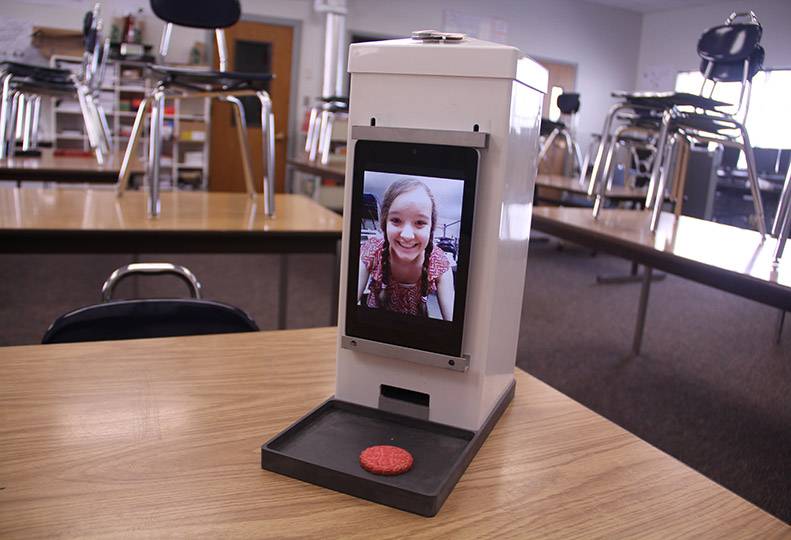 For 13-year-old Brooke Martin, seeing her two golden retrievers, Kayla and Zoey, has become a whole lot easier thanks to a visually interactive dog treat dispenser known as iCPooch she invented late last year and plans to begin marketing this fall.

On top of juggling Girl Scouts, school, and her commitment to the Mobius Science Center as a board member, Martin owns Bondgy Inc., a technology company here that she created to commercialize the product.

"I started thinking about how I missed my dogs a lot when I was gone," Brooke Martin says, describing how the product first came to fruition.

The current prototype is a roughly 1 -foot-tall, molded-plastic device with a place on the front for a tablet computer that would be provided by the consumer. It's powered by an internal motor that's controlled by software and connected to a home Wi-Fi network that enables a pet owner to remotely dispense treats using a Web-based application. Through camera capabilities both on the attached tablet or phone and on an owner's end, such as those found on most phones, the owner can see and speak to the dog while giving the dog a treat.

The Martins say using a Web-based application, rather than offering an application through the Apple or Android mobile app stores, enables it to be accessed universally across different operating systems and devices.

Brooke Martin says the mobile device attached to the front doesn't have to be a tablet, but does have to have a front-facing camera, such as those found on newer iPhone models. The company plans to use Skype or a similar service with mobile video-chatting capabilities that would be set up to auto-answer when a pet owner calls.

Although the unit can dispense dog biscuits without a customer attaching a front-facing camera device, Brooke Martin says the point of the product is to enable owners to interact with their dogs even when away from home.

"The ideal is to have it be both visual and audio interaction," she says.

The Martins say they believe the high-tech food dispenser can help alleviate separation anxiety for dogs.

She attended the Startup Weekend competitive entrepreneurial event here last September, walking away with the most votes for her interactive dispenser. Startup Weekend is an event that focuses on turning business ideas into startups.

"It's been overwhelming to see the amount of support she's received from the business community at every level," Chris Martin says.

For the initial launch of the product, Chris Martin says the company is seeking $200,000, of which it's raised about $60,000 to date mostly from Kick-Start II, an angel fund formed by Tom Simpson.

"It helps if we have someone like Tom," Chris Martin says. "With his experience and his passion, he can help this be successful."

The Martins are considering a Kickstarter campaign for later this summer. Kickstarter is an online crowdsourcing platform that enables people to pledge money to a project.

Brooke Martin, who plans to attend North Central High School in the fall, attributes some of the success of the product to the Odyssey Gifted Program, a magnet academic school offered by Spokane Public Schools and taught at the Libby Center, at 2900 E. First.

"Odyssey really was the reason this whole thing started," Brooke Martin says, adding that she developed the idea for the interactive treat dispenser through an independent project requirement.

The interactive dog treat dispenser initially was called iCUPoo, before Brooke Martin changed the name to iCUPooch. The product underwent a final name change to iCPooch after getting feedback that people assumed from the ICU acronym in the name that the dispenser was a pet health product.

Brooke Martin says the product launch is scheduled for this fall, and the company intends to sell the dispensers in big box stores such as Costco, as well as chain pet stores and smaller pet supply shops. She says the dispenser also will be available through the company's website, assuming it's able to raise the rest of the money needed to begin producing and marketing them.

In addition to the device, the company plans to manufacture and market all-natural dog biscuits to be used specifically with the dispenser. Chris Martin says it anticipates the biscuits will provide a "significant revenue stream" for the company.

Brooke Martin says the biscuits would be available in different sizes to accommodate both small and large dogs.

Although the initial launch will be for a product similar in size to the prototype, Brooke Martin says the company also has plans to create smaller units in the future that would fit in small areas, such as crates or kennels.

The Martins say the company also is toying with the idea of adding social media capabilities that would enable owners to post their activity to sites such as Facebook.

Bondgy is overseen by a six-person board of directors that includes Brooke Martin and her parents, among others. Chris Martin says the name Bondgy is a combination of the words bond and technology, a mash-up that illustrates the company's focus on interactive technology like that of iCPooch, helping maintain bonds between people and animals.

"It's been such a great learning experience for me," Brooke Martin says. "I've learned so much throughout this whole year."

Chris Martin says Limelyte is working on designing the software, Sigma is redesigning graphics and logo, Magner Sanborn helped with the Angel Alliance presentation, and JB Engineering is working on product design. Minds-i, a robotics company based in Liberty Lake, is working on the mechanics.

Chris Martin says the company plans to seek out a Spokane contract manufacturer to build the product, and also a company here to make the biscuits used in the device.

"The primary goal above all others is to do as much in Spokane as possible," he says.