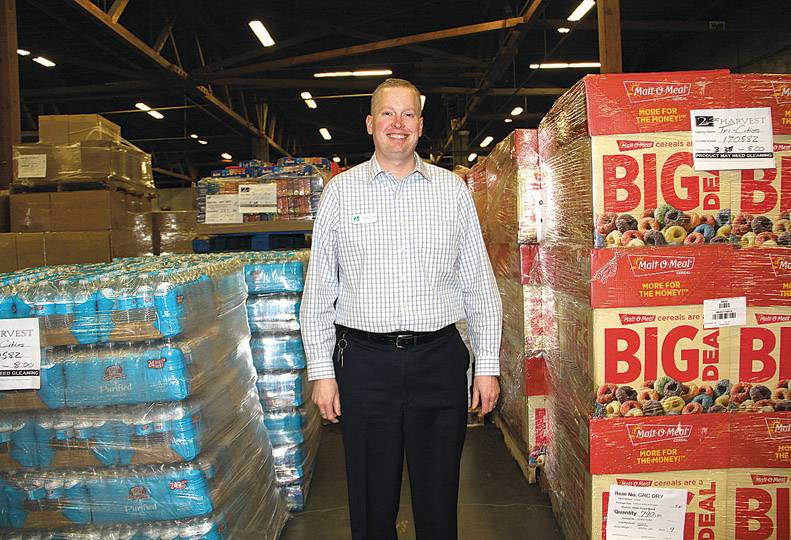 -—Katie Ross
Jason Luke Clark, president and CEO of Second Harvest, says the organization is on track to distribute 24 million pounds of food this year. It currently serves 272 neighborhood agencies in 26 counties in Eastern Washington and North Idaho.

The Spokane-based nonprofit has broken ground on that phase of the Tri-Cities project, and it’s expected to be completed in August, Clark says.

The first phase of the project, which was completed in October of 2012, included building a 14,000-square-foot building on a 2.5-acre parcel of land that Second Harvest bought from the Port of Pasco earlier that year, Clark says. He says that initial phase had been expected to cost $2.9 million, but local unions donated 10,000 hours of labor, which brought the cost down to $1.5 million.

“It literally was a barn raising,” Clark says.

The overall project is being financed partly with a $3 million Washington state community project grant, which is funded through the state’s capital budget, Clark says. Approximately $500,000 of the grant money went toward the first phase.

The organization previously rented a 5,000-square-foot warehouse space in Kennewick, Clark says, before deciding to buy land and build a new facility. Part of the reasoning for the new facility, Clark says, was the upturn in the need for Second Harvest’s services.

“The goal is to increase our ability to accept donations,” he says. “It was also clear that more service to south central Washington was needed.”

“Our overall goal is to hit 30 million pounds by 2018 between our two facilities,” Clark says.

The organization currently serves 272 neighborhood agencies in 26 Eastern Washington and North Idaho counties, Clark says, with 90 of those agencies located in Spokane County. In addition to running its own programs, which include mobile food banks, it provides food to other food banks, as well as to meal centers and after-school programs.

“Our job is to get food where it’s needed most,” Clark says.

The organization currently has about 53 employees and 2,500 volunteers, he says.

Second Harvest has faced a challenge keeping up with need in recent years, due partly to the Great Recession, he says.

“Five years ago, we saw a huge increase with the economic downturn,” Clark says. “It hasn’t gone back to pre-recession levels, and we don’t think it will any time soon.”

He says Feeding America, a nationwide hunger-relief charity, concluded in a hunger study it conducted five years ago that Second Harvest and partnering organizations were feeding 46,000 people a week, and he estimates that number now is closer to 60,000 a week.

Of the Tri-Cities expansion, Clark says the Pasco facility will be a hub for processing potatoes in particular and will have a potato-sorting machine. It also will have a volunteer center, he says, for processing and distributing donations.

At its 84,000-square-foot headquarters facility here, located at 1234 E. Front in Spokane, Second Harvest is hoping to raise funds to build a kitchen next year within existing warehouse space, Clark says. That would enable it to provide classes on cooking and nutrition to those it serves, he says.

“We have an interesting opportunity to connect the unique agriculture here in Washington with education to help show families how to make their food go further,” he says.

Also for 2014, Clark says that Second Harvest will be ramping up campaigns for its own four core initiatives: feeding children, feeding seniors, feeding families, and healthy eating education.

“Everything we do falls under one of those categories,” Clark says.

As part of that effort, the 43-year-old organization will be continuing to expand some of its current programs, including the previously mentioned mobile food banks, which serve rural and high-need urban areas. Using the refrigerated units, the organization delivers perishable food to families in need regardless of local food bank programs, which might not have the facilities to stock perishables.

“It creates an instant distribution site,” Clark says. “Within a few hours, we can feed a few hundred families.”

Second Harvest also has programs that are aimed at elementary, middle, and high schools. One is a school pantry initiative, Clark says, which seeks to establish pantries in public high schools to help them feed kids. The program supplies some food for the pantry, he says, but mainly works to get the pantry established and then have the school or a parent-teacher association take it over.

In middle and elementary schools, Second Harvest offers A Bite 2 Go, which provides backpack-sized food kits for kids to take home over the weekend.

Clark says that in Spokane, the program currently is feeding between 400 and 500 kids every week. However, he says the need here encompasses about 4,000 kids a week. Second Harvest is working to bring more schools and donors into the program, he says, and hopes to fulfill that need within three years.

Regarding donations, Second Harvest accepts both food and money. Both are vital, Clark says, with cash donations, for example, helping to cover transportation costs of picking up donated food from distributors.

“The reality is, dollars become critical when we think about the food industry contribution,” he says.

For example, Clark says, if Second Harvest gets a call from someone in the apple industry saying they have 400 crates of apples to donate, the organization has to pay for the transport and storage of the donation.

“We leverage dollars with donations for a huge impact,” Clark says.

Second Harvest, he says, has an annual operating budget of $4.4 million. Its annual revenues are about $54 million, Clark says, but he notes that the organization calculates the value of all in-kind donations and treats them as revenue. He says that more than 80 percent of Second Harvest’s funding comes from private donors, and the organization has about 9,000 individual donors.

“A lot of our work is fueled by $25 checks,” Clark says. “That’s one of the cool things, that someone can write a $25 check and have an impact.”

However, any size contribution has impact, Clark says. Second Harvest says it can process and distribute six pounds of food for every dollar donated. It also accepts food donated by people and businesses outside the food industry.

In 2012, the organization completed a large remodel of its headquarters facility, including renovating its volunteer center. The renovation equipped the volunteer center with a sorting line for processing and transporting donations. Prior to the conveyor belt system, volunteers sorted and transported food by hand.

Clark says that about 70 percent of the food Second Harvest receives and processes is perishable. Its warehouses feature sub-zero storage, and its fleet of trucks and mobile food banks all are refrigerated as well. Between its two facilities, Spokane and Pasco, Second Harvest currently has about 200,000 cubic feet of cold storage for donated food, he says.

Second Harvest’s headquarters facility here is 60 years old, Clark says. Second Harvest has occupied it since the late 1980s, and bought the building in 1993.

Of the organization’s strong volunteer support, Clark says, it usually has 13 volunteer shifts a week that tend to book out a month in advance. The volunteer presence here has grown with the renovation of the volunteer center, which has helped Second Harvest continue to increase its output, he says.

“A person can always be nervous about the ‘build it and they will come’ strategy,” Clark says. “Once Pasco is done, we’ll try to increase volunteer presence there as well.”