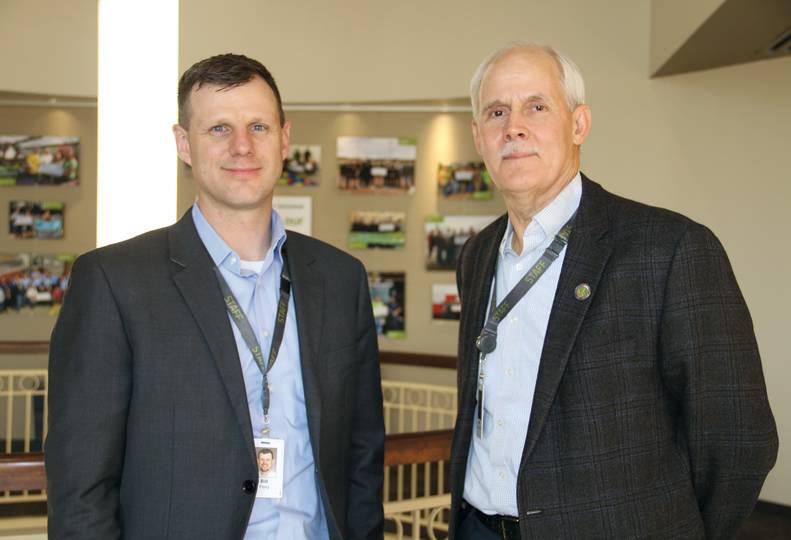 As trade disputes between the U.S. and some foreign nations persist, a couple of financial institutions here say they and their customers are weathering the storm.

However, some say they’re concerned about the long-term impacts to customers whose businesses rely heavily on revenue from exported goods, as well as a potential decline in credit quality among those customers.

Jonathan Dale, Umpqua Bank senior vice president and regional executive of commercial and corporate banking for Portland, Eastern Washington, and Idaho, says most of the Portland-based bank’s customers saw tariffs coming and were able to prepare ahead of time.

“The trends of diversifying away from China were already starting to a degree,” Dale says. “If anything, we’ve seen the China tariffs accelerate some of that behavior.”

Umpqua Bank itself has a diversified revenue stream, Dale says, and hasn’t suffered any significant consequences of trade issues. Umpqua has been in a supportive role for customers affected by tariffs, he says.

“I think we did a pretty good job of helping our clients think more long-term and discuss the impacts of what tariffs might mean, because as we all know, the pain sometimes takes three, six, or nine months to set in,” Dale says. “We were ahead of that in our conversations with them, to help where we could in mitigating that.”

At the Spokane headquarters of Northwest Farm Credit Services, Bill Perry, executive vice president of lending and insurance, says the financial cooperative is keeping a close eye on interest rates, which pose the greatest trade dispute-related risk for the organization.

Returns on capital are dependent upon interest rates, Perry says. Interest rates are driven down by slower economic activity resulting from tariffs, leading to lower earnings on capital, he says.

“Our company has approximately $2.6 billion in member equity, or capital, so a 0.25% reduction in the rate of return equates to about $6.5 million negative impact to our net income,” he says.

“We come from a very strong capital position, and we haven’t yet seen the impacts of tariffs filter through our customers and reduce credit quality,” Nonnenmacher says. “That won’t last forever, but I don’t see it manifesting itself in a big crisis in our financial institution. (There might be) a slow degradation, potentially, of credit quality for those customers most reliant on export markets.”

Nonnenmacher says that while the financial cooperative’s customers are feeling the squeeze of tariffs, they’re enduring the situation.

“Our customers generally have come from a fairly strong financial standpoint to begin with,” he says. “While we have a few customers who are heavily reliant on export markets, we have many for whom export sales are a smaller percentage of their overall sales. While a loss, if the export markets impacts them, it is to a far lesser extent.”

However, he notes that Northwest Farm Credit is poised to help those customers who have relied on international markets affected by tariffs by helping them to finance some aspects of exploring growth in other markets.

Perry claims that the uncertainty surrounding international trade — whether U.S. exporters will be able to recapture those international markets that have implemented tariffs, whether tariffs could be increased, and when trade disputes will end — is as harmful to customers as the tariffs themselves.

Without clear answers about the future of U.S. exports, Perry says, many customers find themselves unable to make some financial decisions, such as those involving whether to invest in new equipment or build a new facility.

“I think that’s probably limited investment as much or more than the true dollar cost of the tariffs,” Perry says.

Nonnenmacher adds, “I think it could drive some investment, though, because the best customers are always looking for ways to diversify their markets.”

Umpqua’s Dale says there could be other benefits to domestic customers as they shift their focus away from some foreign markets.

“We see a lot of manufacturers that could not compete with the cost basis, and now suddenly they can,” Dale says. “I’m not going to say tariffs leveled the playing field, but they did reintroduce a space to compete in that was previously considered to be noncompetitive. A lot of our regional manufacturers have seen somewhat of a resurgence in people wanting to buy from them.”

Perry says it’s possible that trade negotiations ultimately could end up reducing some tariffs on U.S. goods that have been in place for years. However, the longer trade tensions continue, the more customers will suffer.

“Long term, you’ll see a fundamental change in supply chains. That would be unfortunate for American agriculture,” Perry says. “The longer these tariffs continue and the trade uncertainty continues, the higher the likelihood is that foreign buyers will look elsewhere for their ag input.”

Even if or when foreign markets call off their tariffs on U.S. goods, Nonnenmacher says the effects of the tariffs will be felt for some time afterward.

“It’s not like if you turn the tariffs off tomorrow, the trade just resumes,” he says. “As customers replace supply chains, it can be hard to earn them back, to reconvert to the supply chain that we have.”

As financial institutions closely track developments related to trade disputes, Dale says it’s important to note that many businesses continue to find ways to grow, resulting in positive outcomes for banks, credit unions, financial cooperatives, and the U.S. as a whole.