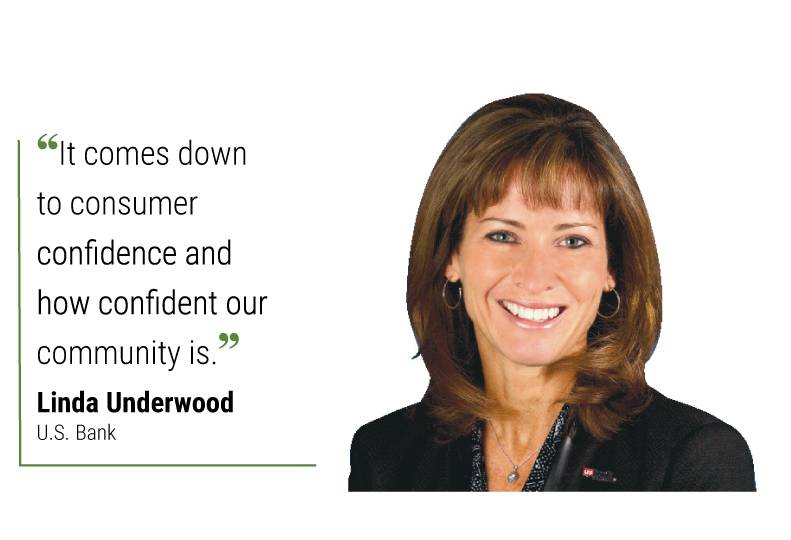 This isn’t the Great Recession for Inland Nortwest bankers.

While the pandemic has brought a host of challenges, leaders at some banks and credit unions say financial institutions are in a much better position to weather the economic downturn caused by COVID-19 than they were before the Great Recession.

In general, they are bullish on their role in economic recovery.

Most banks in the area were thriving in the first quarter of 2020, says U.S. Bank regional president Linda Underwood.

“We attribute that to the fact that we had a strong regional economy. We had confident businesses, and consumers who were doing well,” Underwood says.

On March 15, days before Washington Gov. Jay Inslee issued the Stay Home, Stay Healthy order, the Federal Reserve announced it was slashing its target interest rate to almost zero. The rate reduction “dramatically changed the revenue outlook” for financial institutions, Underwood says, and margins will become tighter as a result.

“The fact that people have stayed home and that they’ve generally spent less money means that they have more money in their checking accounts, which is fundamentally how credit unions grow,” Eckhardt says.

Growth during times of economic upheaval is a pattern for credit unions, he says.

“STCU grew dramatically during the Great Recession because there was a flight from banks to credit unions,” he says. “In 2008, we had about 20% (total asset) growth, and in 2009 we had about 22% annualized growth.”

Greg Hansen, executive vice president of credit administration at Numerica Credit Union, notes that the situation caused by the COVID-19 pandemic is different to circumstances before, during, and after the Great Recession.

“Leading up to this downturn, you had the longest period of economic growth in U.S. history,” Hansen says. “Consumers and businesses, at the end of a 10-year run of economic growth, are in better financial condition than they were in the ‘08-’09 downturn.”

However, he adds, “If the downturn and the shutdowns go on for another three, four, five months, I don’t know how much survives that.”

Jack Heath, chief operating officer and executive vice president of Washington Trust Bank, says the role of banks and credit unions is also different in this economic downturn as compared to the Great Recession.

“That financial crisis was driven by a breakdown in the financial system,” Heath says. “This crisis is driven by a virus. It’s not related to the fundamentals of our economy; it’s just very adversely impacting them.”

Most financial institutions, including Washington Trust, have made loan deferments available to help customers who are struggling. It’s a good thing for consumers, Heath says, but could create a murkier outlook for banks.

“The leading indicator of challenges within a loan portfolio is financial performance and past-due loan payments,” Heath says. “When you’ve deferred them all, it’s hard to get visibility into where your consumers and commercial customers might be, other than as quarterly financial statements come in.”

Underwood agrees that banks will need to be vigilant about checking in with customers.

“You have to be mindful of the fact that we just don’t know how quickly the economy will recover and how well businesses are going to be able to manage through this economic recovery when it begins, and therefore that’s where the banks need to pay close attention with provisions for loan losses and maintaining credit quality,” Underwood says.

She says the behaviors of consumers also will play a role in how banks fare in the coming months.

“It comes down to consumer confidence and how confident our community is that we’re able to help get the economy going again by being out and spending money, and yet being very sensitive to the situation we’re in,” Underwood says.

The federal government’s response to that economic downturn was to spend about $431 billion on buying toxic assets and equity from banks. This time, $3.3 trillion in federal funds is going to businesses through the Paycheck Protection Program and to consumers in the form of stimulus checks.