Such development in state remains stagnant despite recent nationwide reforms 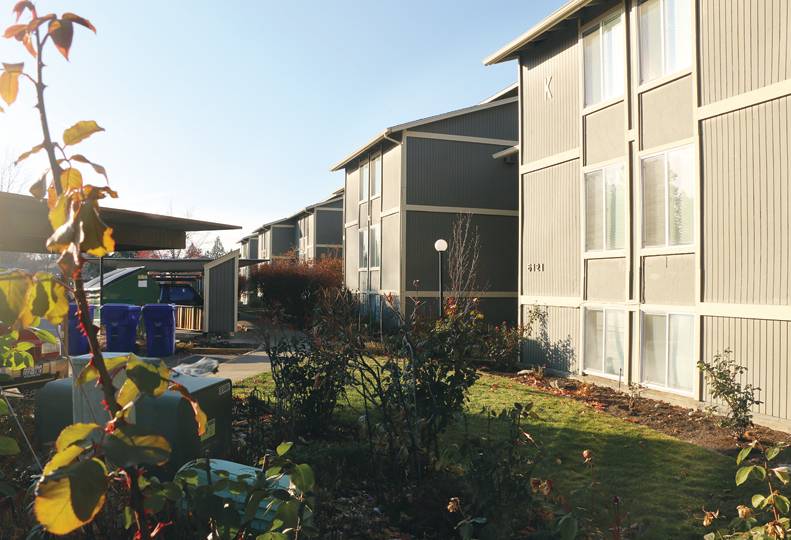 -Natasha Nellis
The Federal Housing Administration has eased regulations for government-backed loans for condominiums in complexes like the one shown here, in east central Spokane.

However, while the ease in financing restrictions is intended to increase access to homeownership, Washington state still has other obstacles that discourage condo development.

Watkins says the new rules could open the door to a new pool of buyers that otherwise wouldn’t have condo homeownership as an option. With easing of restrictions, it’s expected more first-time buyers, older adults, and low- to moderate-income families will gain the option of purchasing a home, he says.

The FHA operates a government-backed loan program that helps people who might not have large down payments available or who have low credit scores, says Watkins.

Significant changes to the rules include the single-unit requirements, investor limitations, FHA concentration, commercial limitations, and recertification. The U.S. Department of Housing and Urban Development issued its ruling over the summer and the new guidelines took effect on Oct. 15.

Watkins says this is a shift from previous rules that required that the entire complex be insured by the FHA in order to obtain an FHA loan.

Other changes saw the increase of commercial or nonresidential space within an approved condo project to 35% of the overall space, up from the previous rule of no more than 25%, allowing for more mixed-use developments to qualify for FHA financing.

And now, up to half of the units in an approved project can be financed with FHA-insured mortgages, an increase in FHA concentration from the previous 30% requirement.

The new rules also extended the recertification requirement to three years for approved projects. The previous requirement was every two years.

HUD estimates that with these changes, units in at least an additional 20,000 projects nationwide will be eligible for FHA loans, although numbers aren’t available at a local level.

With the changes also come the re-adoption of “spot approvals,” a practice the FHA banned back in 2010 that allows for financing of single units within unapproved condo complexes.

Despite the changes to financing rules, questions linger as to the effectiveness of such a ruling in the Spokane market. The Washington state Condominium Act of 2009 added development costs and liabilities that Watkins says almost guaranteed that a condo developer would be sued, making condo developments an unattractive option in the area.

This has led to a serious deficiency in condo developments in the Spokane market.

Watkins says less than 10% of homes in the Spokane area are condos.

In 2008, 178 building permit applications were filed for both the city of Spokane and the county, a significant drop from the previous two years at 601 and 485 permits filed. The following years continued to see declines, with only 68 filed in 2017, according to data from the most recent Spokane-Kootenai County Real Estate Research Committee report.

During that same period, permits for 8,172 multifamily units and 9,983 single-family homes were filed in the county.

A new bill meant to reform condo liability was passed earlier this year, but some local developers feel that the reforms didn’t do nearly enough to protect developers.

Jim Frank, founder of Liberty Lake-based real estate development company Greenstone Corp., contends that the new bill restates existing laws and does nothing to ease burdens on developers in Washington.

“The one that they passed was just a shell; it was the only thing they could get passed. It’s essentially nothing, a restatement of an existing law. It’s had no effect and will have no effect on allowing condominiums to be constructed (in Washington),” he argues.

Frank says the results of the 2009 Condominium Act were to end condo construction in Washington, as developers faced burdensome development standards and an inspection regime that he says went above and beyond what was standard for any other type of housing development.

“The liability imposed drove everybody out of the market,” he says, though he adds that increased market competition and rising prices have led some Seattle developers to take the risk in recent years and build high-end condos in King County because the projects provide enough revenue to offset the risk.

But the risks and costs are too high for affordable condo developments, he says.

Frank does note, however, that he believes the changes to the FHA financing guidelines are “positive and very helpful. … condominiums have always been treated differently so it’s helpful that they’re not anymore.”

He adds that the ruling is helpful in North Idaho and likely will stimulate condominium development there.

Watkins says reforms to the Washington Condominium Act are a step in the right direction and have eased burdens for builders looking to develop large-scale condo projects. He adds that conversations are still being held on the state level to pass liability reforms.

The FHA reported that just 2% of all FHA loans nationwide are condo mortgages.

Spokane currently has about five weeks’ worth of single-family homes, including condos, on the market, Watkins says.

He adds a four- to six-month supply of single-family homes on the market is about average, more than six is considered a buyers’ market, while less than four is a sellers’ market.

“It’s the lowest it’s been in Spokane since we started tracking it,” he says. “And what that does is that puts major pressure on the whole marketplace.”

The lack of inventory has caused intense competition and rapidly escalating prices, making it nearly impossible for first-time buyers or those with low to moderate incomes to purchase a home in the area, he contends.

“Homeownership is a great thing,” he contends. “We’re going to push and promote any legislation that will help make that happen.”

Watkins says the hope is that the changes to the FHA guidelines will open more options for those people and help balance the market.

That’s especially necessary, he says, as Spokane braces for the influx of people that are anticipated with the Fairchild Air Force Base expansion and the new Amazon Fulfillment Center coming online.

“We’re at a critical stage where every month that we don’t find more availability — the marketplace is rising 1% a month — that means fewer people are able to qualify for a home,” he says.