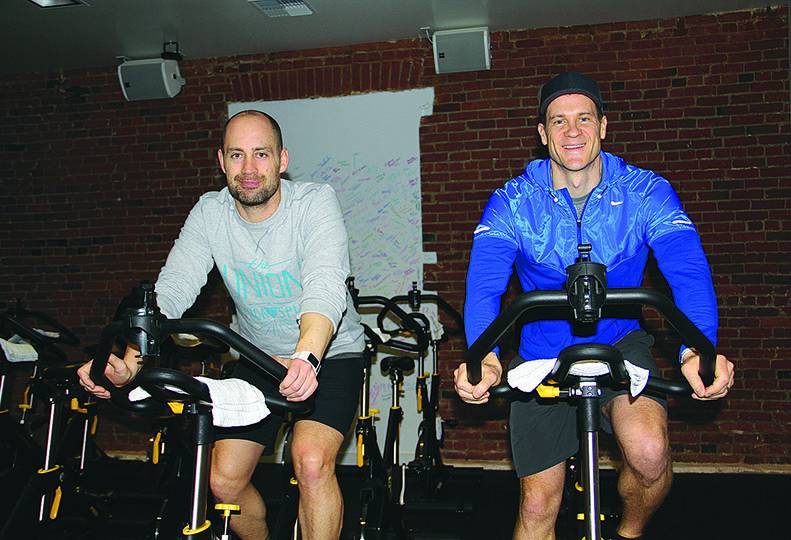 -—Katie Ross
Entrepreneurs Nick Murto and Tyler Lafferty opened The Union spin and yoga studio earlier this month to provide workouts similar to those they experienced in larger markets.

As more movements emerge in the health and fitness industry, especially in niche markets, Spokane’s fitness entrepreneurs and larger gyms are taking steps to keep up with the times.

Targeted workouts such as yoga, Pilates, Pure Barre, spinning, and Zumba have been rapidly outpacing generic workouts in popularity. More recently, niches such as high-intensity interval training, or H.I.I.T., personal training, and group classes have appeared on the American College of Sports Medicine’s annual predictive Top 20 Fitness Trends for 2014 list.

Murto says the idea for the studio came from the duo’s preferred workouts, and also from workouts he experienced while traveling.

“When I was in L.A., I came across a yoga studio I was really drawn to,” he says. “Then in New York I tried Soul Cycle, and started getting really hooked on that.”

When asked why the duo didn’t just open a general gym, Murto says the pair is all about niche markets.

“Everything for us is about specialty,” he says. “We want to have our niche, in all our businesses. It makes it easier to do a better job and focus.”

Lafferty says that while The Union is focused on building a community of yoga spinners, he recognizes that combination is not for everyone.

“We wanted to build a culture and a community,” he says. “It lends itself well, but we’re not for everyone. We’ll freely admit that.”

Murto adds, “We play loud music, there’s black lights, some people love that. Some people, it’s not their thing.”

Despite the studio’s unique atmosphere, Murto and Lafferty say that their clients range in age from late teens to their 60s.

Overall, both Murto and Lafferty say that fitness trends tend to cycle, and currently, the specialized workout is what customers want.

Lafferty notes that other niche workouts, such as Pure Barre and CrossFit, have also been gaining steady popularity. Larger, more general gyms, he says, also have begun to offer more specialized classes.

“You’ll start to see gyms offer that kind of stuff,” he says. “I think we’re in a time when people are digging a specific workout.”

Despite their commitment to the niche industry, both Murto and Lafferty say that larger gyms still serve a purpose.

Murto says he also still has a membership to a larger club. Both men say they expect the trend of targeted workouts to continue, however.

Angelie Melzer, owner and founder of the Team Pilates studio at 521 E. Holland, says she believes that there’s space for both niche classes and general fitness operations.

“I think there’s a market for both,” she says. “I don’t see gyms going by the wayside. But I think there’s people out there looking for more than cardio. There’s just deeper knowledge.”

Melzer began practicing Pilates at the age of 12 as a way to treat her severe scoliosis. Thanks to the exercises, she says, she was able to avoid having a spine-fusion surgery.

“I was able to have a professional ballet career and never had to have a back surgery,” she says.

Melzer’s studio offers Pilates and ballet barre, an isometric workout that incorporates a ballet barre, classes and recently launched Pilates Live Online, which offers clients the option of taking studio classes in their own homes. Clients are able to choose from three tiers of online membership: virtual private, which has live one-on-one sessions with an instructor; exclusive, which has live class sessions with instructor feedback, and basic, which has live classes. All the memberships include recorded sessions so members can return and watch a class again. All the classes offered by the studio are online.

“I train teachers, and at the end of their one- or two-year training, they have to test out,” Melzer says. “It was getting harder and harder for people to come to me, so I started Skyping. It was phenomenally successful.”

Melzer decided last fall to do a beta test group, offering the online classes as well as instructor feedback.

“We see you, we cue your body, we help you fix your form as you go,” she says.

The online classes help those who’re too busy to get to the studio, Melzer says.

“We definitely have to market to folks that can’t be there,” she says. “People are always traveling these days. It’s also for older folks who can’t get out of their homes easily.”

Melzer says that busyness and technology also are factors in fitness trends today.

Large, established workout facility operators such as YMCA of the Inland Northwest, which has locations on the North Side, north of downtown, and in Spokane Valley, have begun to offer a wide variety of targeted group classes. Aleisha Colvin, YMCA of the Inland Northwest association health and wellness director, says classes that blend different workouts are popular at the club.

Sandi Wasteney, group exercise coordinator for the YMCA here, says the dance-centered workout known as Zumba has been popular at the club for at least the last four years. Another popular class is total body resistance exercise, or TRX.

Wasteney and Colvin say that all group specialized classes at the YMCA are free with a general membership.

The club also offers small group fitness classes, which can consist of three to six people and use implements such as kettle balls, medicine balls, ropes, and functional training. The small group exercise program costs extra on top of the general membership. However, Eric Denney, health and wellness director for the central YMCA located downtown, says, “It’s cheaper than regular personal training; it’s also fun to have other people to work out with.”

Denney says that small group training can cost from $60 to $120 a month, depending on the number of workouts per week.

The affordability and camaraderie aspects of the small group workout are part of what makes that kind of training popular, Denney says.

Colvin says that the club, which has about 40,000 members between its three locations here, is always on the lookout for emerging trends in the industry that it can incorporate into its offerings.

“Trends are always important,” she says. “We want to offer classes that are exciting.”

Colvin says that YMCA employees keep an eye on upcoming trends through industry publications and network with other YMCAs to find out about the latest trends.

Denney says that sometimes, workouts that are popular in other parts of the country don’t always pan out.

“We’re always looking and trying to bring stuff in,” he says. “Sometimes you think you’ve got a winner, but you don’t.”

Wasteney says that the club is looking into implementing barre and fusing it with a Pilates-type workout for a new class. The club only implements a few new programs a year, she says, so members aren’t overwhelmed by too many choices. Other upcoming possibilities include programs using a stand-up paddleboard and a Tai Chi class, Colvin says.