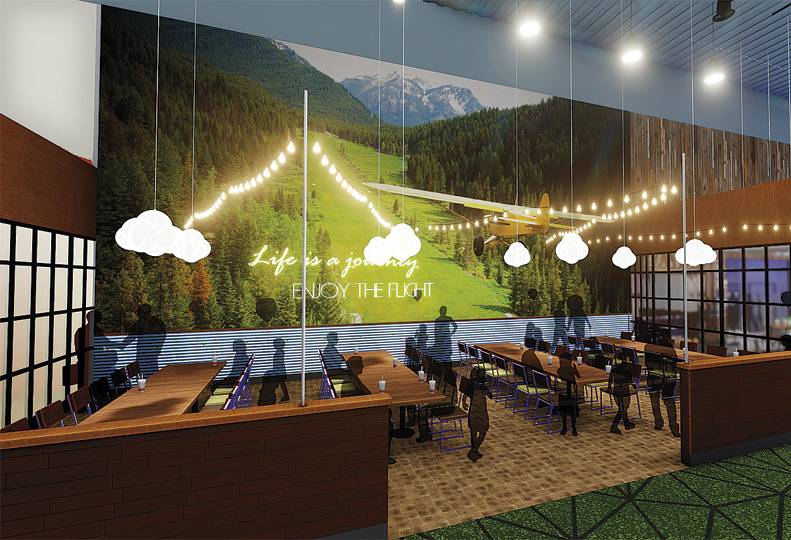 -—Dynamic Design Group Inc.
Flight 509 Adventure Park is expected to open in Spokane Valley in the spring of 2023. As envisioned, it would employ about 60 people.

Initial site work has begun on what will be a 22,000-square-foot indoor family amusement park in Spokane Valley.

Tim Homer, owner of party equipment rental store All-Star Jump, says he hopes to open Flight 509 Adventure Park in spring 2023. Concrete footings for the adventure park building have been poured on a site abutting All-Star Jump, at 10502 E. Montgomery. All-Star Jump’s office and warehouse spaces will adjoin Flight 509. About 2,000 square feet of the current All-Star Jump building will be incorporated into the Flight 509 building as space for restrooms, a party room, a kitchen, and a reception area.

“We’re trying to put attractions in here where the whole family can participate so that when a family comes in, everybody has something they can do,” Homer says.

Homer says Flight 509 wants to be inclusive of people who are sensitive to sensory overload.

“We’re going to try to have days or times—we don’t know when yet—when we’ll turn some lights and noise off so that they can come in and enjoy it without getting overwhelmed by the lights and the sounds,” Homer says.

Flight 509 will offer spaces for small events, such as birthday parties. Day passes to certain attractions, such as the ropes course, will be available. Memberships also will be available, and will include monthly, annual, and family plans.

“We don’t know what the pricing’s going to be yet,” Homer says. “It’ll be similar to what you would pay at a trampoline park or at (Hayden-based) Triple Play Family Fun Park.”

“They’ve done valuations for Six Flags, so they know the market well,” he says. “They help you optimize what attractions you want, and then they do the feasibility study for the bank.”

Homer says he decided to go with an aviation theme for Flight 509 in honor of his passion for flying.

“Back in a different life, I was a pilot,” he says. “I flew commercially for a bit for the Postal Service and some backcountry stuff. That was back in the early ’90s.”

He still flew privately until last year, when he sold his personal airplane.

He says he’s not sure exactly when Flight 509 will open, as supply chain delays have made construction timelines less predictable.

“We were hoping to be able to open in late December of this year or early next year, but now it’s looking more like April of next year, if we’re lucky,” he says.

All-Star Jump was founded about 20 years ago, Homer says. He and his wife bought the business in 2018. All-Star Jump rents out about 100 inflatable bounce houses and slides, as well as mechanical bulls, photo booths, and other party equipment. He says business was brisk until the pandemic, at which point he decided to pursue his idea to expand with an adventure park that can be open year-round, as opposed to more seasonal demand for inflatables.