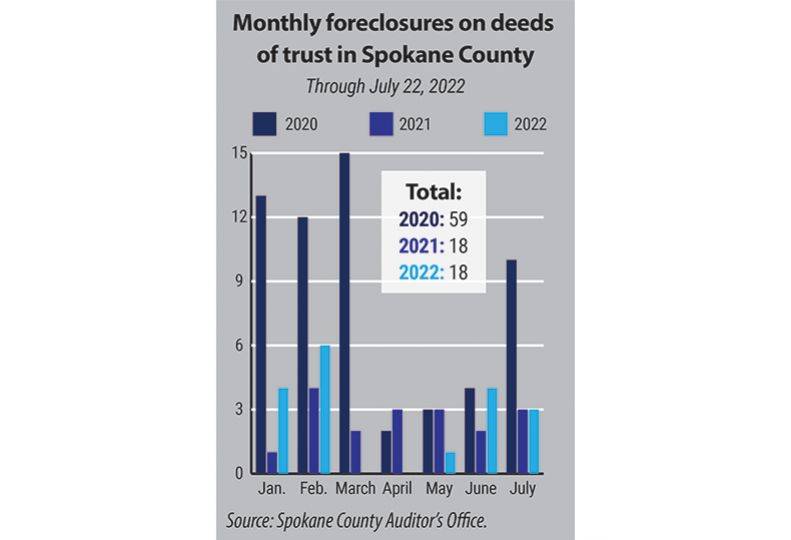 Foreclosure activity in Spokane County this year is holding at the same pace as last year’s default volume.

That bucks the national trend in which foreclosures are on the rise. Market observers say the Inland Northwest’s robust real estate market could be keeping defaults at bay. Demand for foreclosure assistance in the region is growing, though, which could indicate the Spokane market is just trailing the national trend.

A new study recently released by Attom Data Solutions, an Irvine, California-based real estate data company, reports that U.S. foreclosure activity has increased by well over 200% in the first six months of 2022 in 96% of major metropolitan areas.

From January to July this year, however, Spokane County has recorded 18 completed foreclosure actions, called foreclosures on deeds of trusts, which is exactly the same number as the same period in 2021.

This year’s foreclosures are still historically low, according to data provided by the Spokane County Auditor’s office. Foreclosures this year compared with January to July 2020, for example, have declined 69%.

Jordan Tampien, founder and co-owner of 4 Degrees Real Estate, says foreclosure activity has been declining in recent years, and currently “It’s so low that any kind of movement is actually a big movement.”

Tampien says that homeowners could sell their property if they wanted to avoid a repossession, and that could help keep foreclosure figures down for the time being.

Rob Higgins, executive officer of the Spokane Association of Realtors, agrees and says properties likely will go up for sale before a foreclosure is finalized.

Higgins says the current market is doing much better than another period of increased foreclosure activity between 2007 and 2011. During that period, unemployment was high, demand for housing was low, more buyers were unqualified, and there was plenty of housing inventory, he explains.

Higgins says these current indicators are good signs that this is a better economy in which to recover from a foreclosure.

Anthony Carollo, CEO of Spokane-based Vista Title & Escrow LLC, says foreclosure activity has been minor so far this year, with title orders for distressed properties constituting less than 1% of business at Vista, compared with about 2% of business in 2019.

“We aren’t seeing many properties in distress from the foreclosure paperwork recorded when we do our title exams,” Carollo says. “(Home) prices have increased so much in the past few years in Spokane that most owners feel like they have a number of other options before the property goes back to a bank.”

In the coming months, there could be an increase of foreclosures for homes purchased recently, since those homes were purchased with higher mortgage interest rates, and equity hasn’t had time to build up, he says.

“I think just the fear of recession is rocking people a little bit, but we’re still 30,000 homes short,” he says. “There’s not enough houses for people to live in, so the demand is still there.”

Dalton says the number of trustee’s sales can be skewed because some properties enter foreclosure multiple times throughout the year.

“It’s not unusual for us to see the same property go through this round of activity a couple of times before a foreclosure actually finalizes,” Dalton explains.

Dalton says the foreclosure outlook for the rest of 2022 is uncertain because today’s homeowners have many options to turn to for assistance before a repossession is triggered, but a big surge in foreclosures is unlikely.

With the end of the federal foreclosure moratorium a year ago, Jennifer Hentges, housing counseling manager of Spokane Neighborhood Action Partners, says her office has been busy helping homeowners with resources to avoid foreclosures since January.

Hentges says her office has nearly reached its limit to handle requests from homeowners, and SNAP has also been receiving eight to 10 referrals a day for foreclosure assistance from the state.

She says she expects strong demand for SNAP foreclosure assistance will continue through the rest of the year.

SNAP offers counseling and assistance for homeowners who have received notices of default and trustee’s sales notices, Hentges says.

The nonprofit can offer help through the Washington state Department of Commerce’s Housing Assistance Fund, as well as mediation, which will slow the foreclosure process and allow time for homeowners to work with lenders to avoid a repossession.

Hentges says the option of selling a home to meet financial obligations should keep foreclosure activity down in the current housing market. Although she cautions that selling a home now isn’t always the best choice for homeowners, because mortgage payments are probably lower than current monthly rents at comparable properties.

A property owner has to fall behind on tax payments for three years before the foreclosure process is started, he says, noting that 172 property tax foreclosure notices filed this year were for properties with delinquent taxes dating from 2019.

Whitten says the Treasurer’s Office consistently has collected 97% to 98% of property taxes annually, even throughout the pandemic, an indication of a healthy economy here.

Through the pandemic, property owners were allowed to make partial tax payments to avoid delinquency, and that’s made a big difference in avoiding a foreclosure, Whitten says.

Through June this year, property tax foreclosure notices have been filed for 79 properties, including residences, vacant land, and commercial properties, which is approaching last year’s total of 93 tax foreclosures filed. Whitten says he expects the majority of the properties will be redeemed before a sheriff’s sale occurs, though.

In 2021, only 20 properties went to auction, of the 93 foreclosures notices filed.