Fueling an emerging industry: An alliance between public lands and timber products 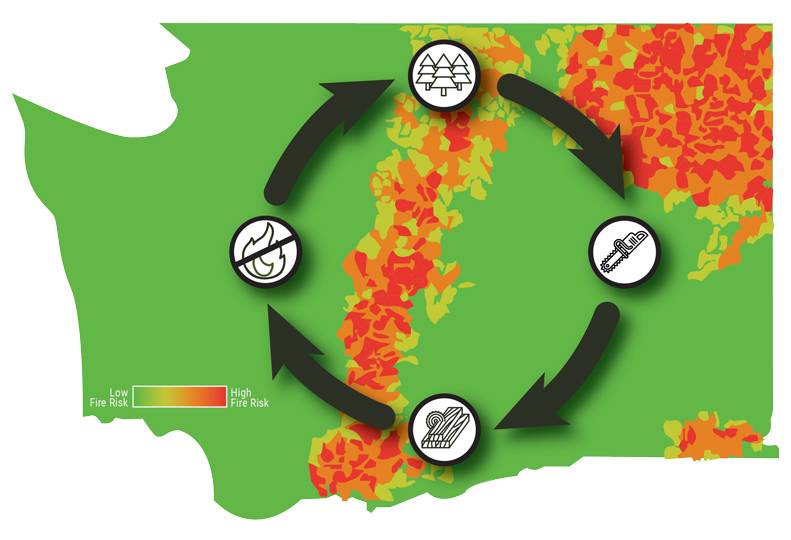 Hilary Franz wants to shorten Washington’s forest-fire season, and she’s executing a plan to do just that.

In the process, Franz, the state’s commissioner of public lands, is fueling an emerging industry in Eastern Washington.

The state’s Department of Natural Resources, which Franz heads, formed a forest health initiative that partners private and public enterprises to cultivate local economic benefits as it reduces wildfires and the damage they cause.

“In central and Eastern Washington alone, we have 2.7 million acres of forest that are already dead, dying, or in the process of dying, and half of that is federal land,” Franz says. “Small forest owners make up the next big bulk, and then state and tribal lands.”

She claims the forest health crisis is leading to more catastrophic wildfires.

“It’s like if you put a tinderbox with all of the kindling out there in the woods with a lightning strike or spark.” Franz says. “You’re going to have a massive fire because our trees are no longer healthy enough to withstand fire.”

Those dead or diseased trees and trees of a smaller diameter often are discarded or ignored by timber mills as useless, because they can’t be converted into boards, Franz says. However, a new building material that is rapidly gaining popularity in the U.S. may hold the key to eliminating that waste.

“That’s the beauty of cross-laminated timber and mass timber, is that they can create a building product out of dead, diseased trees and smaller, thinner trees,” she says. “Right now, all of those trees have been going up in flame and smoke, causing environmental damage, economic damage, and health damage.”

CLT, or cross-laminated timber, is one form of mass timber, which refers to any composite wood system that adheres multiple pieces of wood together to increase their strength for use in construction.

Seven CLT panel manufacturers operate nationwide, with two of those having a significant presence in Eastern Washington. One, Vaagen Timbers LLC, is headquartered in Colville, about 70 miles north of Spokane. The other, Menlo Park, California-based Katerra, has a new, large manufacturing facility in Spokane Valley.

The goal is to treat 70,000 acres of forest a year, which translates to guaranteed product for mass timber product manufacturers who partner with the state, Franz asserts.

In 2018, Natural Resources removed diseased and dying trees and underbrush from 30,000 acres of publicly owned land. It treated 50,000 last year and is on track for another 80,000 acres this year, Franz says.

“We signed an agreement with the federal government, so we can do projects on federal land, because they’re the most significant challenge,” she contends. “Disease and insects and fire don’t follow geographical boundaries.”

Russ Vaagen, founder and CEO of Vaagen Timbers, says about half of the wood that the company uses to manufacture its CLT panels comes from the state and federal forest-thinning program.

“The idea for me has always been creating a tool that makes forest restoration, forest thinning possible, and to make it not only possible but to make it financially viable,” he says. “Now, we can have these forested communities. We can build businesses that are right-sized to solve the crisis that our forests face and create jobs and opportunity.”

Vaagen says the rest of the wood is sourced from private landowners, state forests, tribal lands, and other timber companies. All wood used by Vaagen Timbers is milled by Vaagen Bros. Lumber Inc., although the two companies operate independently.

Vaagen Timbers is one of only two CLT manufacturers in Washington state and the only one participating in the program, Franz says. Katerra, which has a manufacturing facility in Spokane Valley, is the other.

Franz adds that the department is in discussion with Katerra to join the program.

Vaagen Timbers uses a high frequency curing system to heat the glue under pressure, which allows the product to cure rapidly, Vaagen says. The manufacturer can cure a single 20-foot section in about six minutes, or a 60-foot long, 4-foot wide panel in just under 20 minutes.

“We can produce about 2 million square feet of three-ply CLT annually,” Vaagen says. It’s then cut using precision automated computer-controlled milling to make openings, such as for doors and windows, before being sanded smooth and sent to a job site.

He contends that a 20,000-square-foot building can be erected in about five days with CLT panels, because they arrive at the construction site precut and ready to assemble. By comparison, traditional framing can take between three and six weeks.

“It’s all local,” he says. “A lot of people look at it as farm-to-table. This is like forest-to-frame.”

CLT is more expensive than traditional materials, given the amount of wood and factory labor necessary to produce it. Vaagen contends, however, that the higher cost is offset by the high performance of the buildings, as CLT buildings typically are sealed better than traditional structures, which results in savings in heating and cooling costs.

He adds that he is currently engaged in a study with the University of Oregon about using mass timber in hospitals, because viruses and bacteria don’t live long on wood surfaces.

Beyond the environmental benefits the forest health program provides, Franz says partnering with CLT manufacturers can create jobs and boost the economy of smaller rural towns.

She adds, “This now creates an economic opportunity, especially in our most rural communities that have struggled for generations with 7% to 12% unemployment, and COVID has only made it even more challenging.”

The short lead times needed for CLT manufacturing can boost the affordable housing supply and building supplies while at the same time preventing environmental and health damage brought by wildfires, she contends.

Vaagen Timbers currently employs 32 people, but Vaagen says he anticipates upwards of 50 employees once the facility is running at capacity with its current line. The company will be the supplier for multiple projects slated to be built this year, including the new Delta Dental building in Colville.

The facility was certified to produce CLT last July.

He adds that Vaagen Timbers plans to invest in a $35 million second line, with 150% of the current capacity of its existing line, and the company hopes to start work on it early next year. Once the second line is up and running, the 68,000-square-foot facility likely will eclipse 100 employees, he says.

Long term, Vaagen says, he plans to build 10 plants within the next 10 years, depending on market conditions.

The company is growing, he adds, and likely will hit close to its revenue goal of $10 million this year. At full capacity, the plant is capable of annual revenue of $25 million to $30 million, he contends.

Eastern Washington’s other CLT manufacturer Katerra, founded in 2015, has a 270,000-square-foot manufacturing facility at 19202 E. Garland Lane in Spokane Valley. According to a release from the company, the facility has an annual manufacturing capacity to provide more than 11 million square feet of floors and roof.

Katerra, which describes itself as a tech company that operates as a construction supplier, builder, and designer, has over 8,000 employees worldwide between its five established locations and showroom. The company is also in the process of establishing five more locations in India and the Middle East, according to its website.

In late May, the company announced its factory had earned Chain of Custody certifications from the Sustainable Forestry Initiative, Forest Stewardship Council, and the Programme for the Endorsement of Forest Certification, all of which promote healthy, sustainable management of forests.

The manufacturer has supplied and built several projects in the Spokane region, including the well-publicized Catalyst Building in the University District, as well as a 132-unit apartment development under construction called Pine Valley Ranch II, and the 132-unit Revel Spokane senior living complex.

The proof of the program’s effectiveness, along with other steps the department has taken to shore up its fire response, resonate in the numbers, Franz asserts.

While 3.5 million acres have been burned over the last 10 years, the state has seen significant decreases in the number of acres burned a year.

She adds that while the program has had a big impact in reducing the number of acres burned a year, measures taken to change the way the state responds to and fights fires also has had an impact.

“We started training local, state, and federal firefighters together so they could collaborate and coordinate much better,” she adds.

The department has a total of about 14,000 employees. During fire season, between 600 and 800 employees fight fires. The state only has 43 full-time firefighters, but the department recently received approval from the Legislature to bring on 30 more, Franz says.

“Our forest health work is definitely helping. I think you’ll see even more significant reduction in the impact of fires as we’re only two years in,” she says. “It’s a huge environmental and economic win that we often don’t see enough of.”

A decrease in fires will bring further environmental benefits beyond preventing significant amounts of carbon from entering the air, Franz says.

“A landscape that has completely been burned, it’s almost like a ghost town,” she says. “Besides destroying the trees, leaving them with these charcoaled, burnt sticks standing up in the air, you’ve lost the wildlife habitat that the birds and ungulates depend on.”

Often, wildfires burn hot enough to scorch the soil, leaving it sterile and lifeless for years, she says.

Franz adds the charcoal from the forests also threatens the salmon population because it contaminates the waterways and is damaging to the water quality.

The damage from forest fires also leads to landslides, which have been on the rise in recent years in Eastern Washington, especially after snowpack melt-off or a snow-and-rain event, she adds.