Getting a grip on boating safety 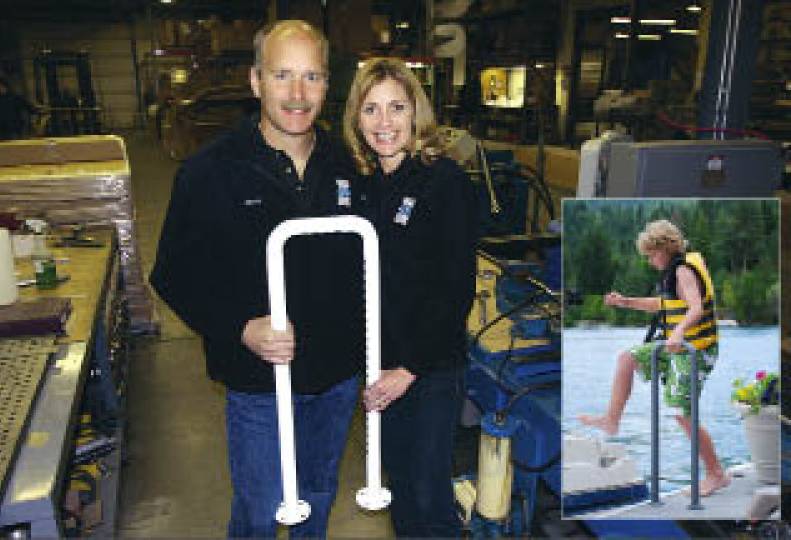 The idea for a deceptively simple dockside safety device, invented here by Marty and Dawnmarie Long, was born from an accident in 2006 that caused Dawnmarie to undergo surgery—and left her with a lot of pain and plenty of time to think about how the accident could have been prevented.

As she was stepping off a ski boat onto a dock at Hayden Lake, Long says, "I got hit by a wave, got thrown into the dock, and broke my left shoulder."

The early July accident put Long out of commission for the rest of the summer, leaving her to watch from the sidelines as her husband and three daughters enjoyed the lake. It occurred to her that if she had just had something to hold onto to steady herself as she exited the boat, she likely would have avoided the injury.

While she was recovering, Long literally took a napkin and sketched an early version of what would eventually become the Dock-N-Safe Safety Hand Rail, she says.

Now, two years later, the company the Longs launched, MLDL Inc., sells through marine supply distributors and via its Web site, at www.docknsafesafetyrail.com, the Dock-N-Safe Safety Hand Rail that it developed.

The safety rail is made of powder-coated steel bent into an inverted "U" shape and tooled with a grip on the inside surface. It can be anchored to a dock with bolts. It offers a solid object for a person to grab onto to steady a boat while another person ties it off, and a sturdy grip for people who are stepping off of watercraft, including ski and leisure boats, as well as paddleboats, kayaks, and jet skis, Marty Long says. It can be mounted to most types of docks with the hardware that's included, though special hardware would be needed to attach it to a concrete-overlayed dock.

Sales of the product have been climbing each year since the company started selling it in 2007, Long says. He declines to disclose the company's annual sales, but says after a strong first-year start, the increase year-over-year from 2008 to 2009 was modest, at 29 percent, although this year are up 39 percent so far, he says. Long says he anticipates sales growth of between 80 percent and 90 percent this year. Altogether, the company has sold more than 250 of the safety rails.

The product, which comes in grey or white, is sold through four distributors at retail stores or through dock builders, and retails for about $160.

The couple says the device has been met with enthusiastic response at boat shows.

"When people see it, they usually buy two," Marty Long says. They say that many people they talk to have either been injured themselves getting on or off of a boat, or know someone who has.

"People just don't know they're looking for it until they see it," Dawnmarie Long says.

They say it has helped Marty Long's aging mother, for instance, to be able to get onto a boat and enjoy a ride. Before the Dock-N-Safe was introduced, it was difficult for her to climb onto a boat.

The Longs say entrepreneurship presented a steep learning curve, since neither had run a business before, but they dove into learning. What they don't know, they seek help to learn, they say.

The couple worked with Tipke Manufacturing Co., of Spokane, to determine the best material to use for their product, and Marty Long created tooling to create the grip on the metal bar. It took some planning and trial and error to get the safety device at just the right height for the best use with a variety of watercraft, Long says. Tipke manufactures the safety rails.

Marty says it was important to create something that would have a small footprint and would look nice, because it's mounted permanently on a dock. He says people are sensitive about losing any space on already-small docks. In addition to the grip, the Longs have added reflective decals to the device that can help a boat operator see the dock and the safety grip after dark.

They say they knew the device would be simple enough to replicate by others, so they filed a patent application before they started producing or selling it.

When the Longs reached a point where they needed to describe their business to other businesses, they decided to get help. They took workshops at the Small Business Development Center here, and have become an off-site client of Sirti.

"When you are a new company, the hardest part is, 'Now what do we do?' We have this product, but how do we make a business plan" or market it, he says. The Longs took classes on how to get a patent, how to run a business, and how to use QuickBooks, for example.

It took about a year from the time they came up with the idea until they began selling the products, Marty Long says.

Long says the business model, as they see it right now, is to develop relationships with distributors and dock builders as avenues for sales. If that side of the business increases as he anticipates, Long says the company ultimately would stop selling the product through its own Web site.

"Our business model is to get as many distributors as possible, and use their distribution channels" to sell the product.

Dawnmarie Long manages the day-to-day operations of the company from the couple's South Hill home. In addition to helping with the company, Marty Long also works full time as a firefighter in Spokane County. They estimate that they each put about 20 hours a week into the venture, and they contract with an accountant to do the taxes. So far, the Longs have invested about $50,000 in launching the company, they say.

"When you're a small company, it's hard to have ample amounts of money to put into the business, without affecting the family," Long says. "It's a gamble, but you know you have a great idea," and want to see it come to fruition, he says.

"The hardest thing is time, money, and patience," Long says, adding that once he and his wife decided to pursue their joint vision, they really committed to it.

"It's an investment," not only of money, but of time and conviction, he says.

At this point, with the growth the company has experienced so far, the Longs say it's about time for them to take another look at their business plan, which they wrote two years ago, and update it or refine it.

Dawnmarie Long, who still has chronic problems and pain from the injury she incurred, says that being able to prevent accidents for others is a primary motivation for her to want to see the product used more.

"For me, if I could help at least one person not to get hurt, it would be worth it," she says.

Marty Long says he expects that at some point, the company will reach a crossroads where it will continue to develop the distribution channels for the safety rail product, or a larger company will buy it. Either way, the Longs would like to make sure people can buy the Dock-N-Safe Safety Hand Rail, because they think it's a worthwhile product, Marty Long says.

"We just want it to succeed," Long says.