Getting creative for charity 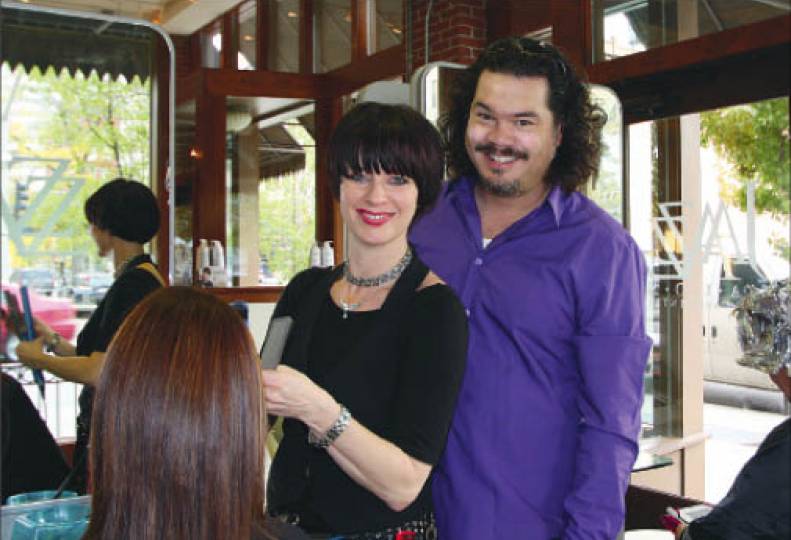 -—Staff photo by Kim Frlan
Sonna and Mark Brado, owners of Jaazz Salon, held a haircutting fundraiser in May for victims of the earthquake in Haiti.

Spokane-area businesses have gotten creative in how they help raise funds for charitable causes, rolling up their sleeves for events ranging from cutting hair to serving chili and pouring wine.

"Being a local company and being supported by our community dollars, we like to give back to our community," says Todd Davis, owner of Spokandy, a candy manufacturer and retail store that supports three to four fundraisers a year by donating chocolate.

"It's an easy give. We're just trying to stay involved to the best of our abilities," Davis says.

Special events can play a significant role in social-services organizations' budgets, as evidenced by information reported by nonprofits on the Journal's list of Largest Social-Service Nonprofits (see page C5). Following are just a few examples of such collaborations between businesses and nonprofits, and the experiences businesses have had with the events.

The Pour is an annual wine tasting and auction that primarily benefits Providence Sacred Heart Children's Hospital's program for children struggling with behavioral and emotional problems.

The event began three years ago to honor the late Dr. Michael Manz, a child psychiatrist at Sacred Heart and also founder of Mountain Dome Winery.

Another wine-related event, the Chocolate & Champagne Gala, is held each year to benefit Lutheran Community Services, and specifically its crisis hotlines, advocacy activities, and other services for victims of violent crimes. Among the Spokane-area businesses involved in the event are Spokandy, Halletts Handmade Chocolates, Mountain Dome Winery, and Europa Restaurant & Bakery.

"Ticketholders socialize and sample all the fabulous wares donated by the vendors," says Lisa VanMansum, events coordinator for Lutheran Community Services. She says this year's event, held at the Mirabeau Park Hotel & Convention Center, in Spokane Valley, was attended by more than 400 guests and grossed $54,000.

Another charity that has benefitted from business-sponsored events is Candlelighters of the Inland Northwest, an organization that helps families who have children with cancer. Jenny's Cafe, of Spokane Valley, has hosted a Bowls of Chili Benefit for the organization for the past three years.

This year, the Gonzaga University pottery department donated handcrafted pottery bowls that patrons could keep after eating their chili or minestrone soup and making a donation.

Bumpers Family Fun Center, at NorthTown Mall, also supported Candlelighters, with a phone-a-thon and a fun night, during which people could have unlimited access to the facility for a donation.

"We get all of our funding from our local community, so it's very important to us to be able to help our families," says Mary Ann Ruddis, executive director of Candlelighters.

Ruddis says that in the past year, Candlelighters has had a broader base of support, but donations have been smaller.

"Some of these community fundraisers have given people the ability to give back in a way that they can right now," she says. "The local community has really stepped up this year."

Ruddis says about 25 percent of the organization's operating budget comes from business involvement in fundraising.

Among the other fundraising events held here this past year are a golf tournament organized by the Spokane chapter of the American Advertising Federation to benefit Avista Utilities' Project Share emergency utility assistance; a food drive sponsored by Avista Corp., Banner Bank, and Appleway Autmootive for the Spokane Valley Partners food bank; and a "break-a-thon" hosted by Jung Kim's Martial Arts Academy to benefit the Spokane Shriner's Hospital for Children.

Jung Kim's Martial Arts raised $38,000 for Shriners Hospital when students of the academy collected pledges based on how many boards they could break during the event and their parents secured pledges from the business community, says Shriners spokeswoman Sally Mildren.

Global Credit Union does charitable fundraising year-round, including efforts in which employees participate in walkathons and other pledge drives, as well as an Operation Spokane Heroes event it holds at the Spokane Interstate Fair.

Abby Koder, Global's marketing manager, says employees of the credit union receive points when they volunteer for an event. The points can be redeemed for paid time off, cash deposits into their accounts, and logo attire. Koder says the rewards program "reinforces our appreciation of everything our employees do to give back to our community."

Some fundraising efforts aren't annual, but rather one-time events sparked by an immediate need.

Wild Sage American Bistro, in downtown Spokane, offered pastries for donations on Christmas Eve last year to assist the Inland Northwest Chapter of the American Red Cross in its efforts to help victims of a large apartment fire in Curlew, Wash.

Similarly, months after the Haiti earthquake disaster, Mark and Sonna Brado, owners of Jaazz Salon & Skin Care Center, decided to put on a haircutting fundraiser to benefit One Hundred for Haiti, a Seattle-based organization that provided needed supplies to Haiti after the earthquake.

"When the earthquake first happened, there were massive efforts to help, but then the news died down. We weren't hearing about it anymore, but the need was still great," says Mark Brado.

The Brados put four stylists' chairs and a massage therapist's chair out on the sidewalk in front of the salon, at 108 N. Washington, and offered haircuts for a donation.

It had T-shirts designed for the event, and asked musicians to donate entertainment. It advertised the event on the salon's Facebook page, and teamed up with a beauty product supplier, TIGI, that brought a bus with more stylists.

In addition to those who got a haircut for a donation, "many people stopped by and put money in our jar. Companies in our neighborhood gave us money, too," Brado says.

Looking back on the event, Brado says the recession didn't keep people from getting involved. "People want to give and they want to participate in an event that goes to a good cause," he says.

"People will give out of their own need sometimes because they feel it's the right thing to do," he adds.

He says it's important to have enough volunteers, to make sure everything is done according to city codes, and to make sure the organization receiving donations can be trusted.

Brado adds, "Don't lay out a lot of money unless you have a guarantee of a lot more coming back."

VanMansum says that over the years, the Chocolate & Champagne Gala has benefitted from having "very consistent people on board."

She also appreciates the enthusiasm of the vendors who donate their time and products.

"It's been really fabulous to know they look forward to coming each year," she says.

Global's Koder says that she has learned through the credit union's fundraising efforts that it's important to keep the effort simple, to keep people informed of what's happening, and to report the results once the fundraising period is completed.

She says it's a mistake to ask people for too much too often, and to forget to thank people for their efforts. She also says it's a good idea to provide stories of people who've been helped by the charity being supported.

"People need to know that their donation will make a difference," she says.