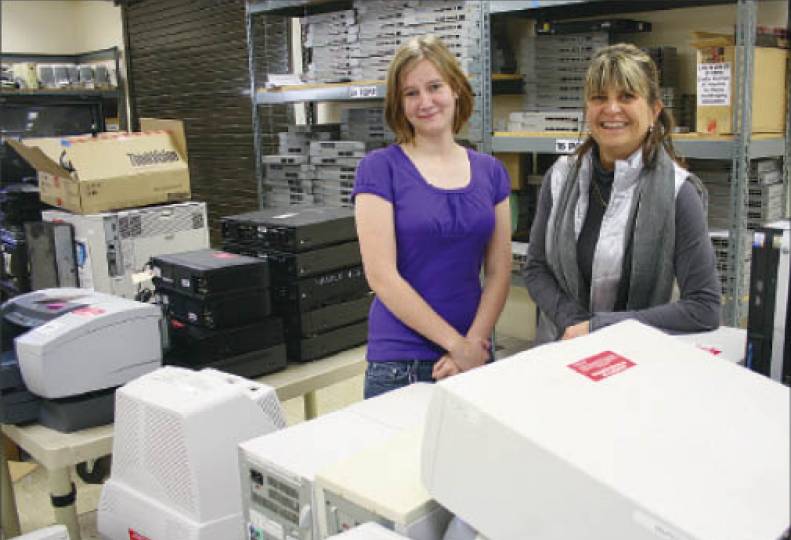 -—Staff photo by Jeanne Gustafson
Jodi Davisson, left, says TEConnections, a program launched here by Yvonne Johnson, of Spokane Public Schools, at right, gave her the opportunity to learn practical computer repair skills, as well as showing her new possibilities for her future.

Jodi Davisson says she never used to see an educational future for herself.

"I wasn't even expecting to graduate high school," says the soft-spoken Spokane Community College student. She didn't imagine herself studying computers, either, she says.

"I was intimidated by them," Davisson says.

Now, however, she's mastering the skills to be a network administrator and is working toward a two-year degree at Spokane Community College here after graduating from Lewis & Clark High School last spring. She says a five-year-old Spokane Public Schools program, TEConnections, introduced her to the computer field, showing her the possibilities available to her and giving her confidence to pursue them.

TEConnections is the brainchild of Yvonne Johnson, who has been a career and technical education support specialist with Spokane Public Schools for about 10 years. Johnson says her idea for a program to train young people to repair and maintain computers and networks while providing community service originally grew out of a basic need for help maintaining computer labs at various locations around the district.

It has since evolved into TEConnections, or Technology, Education, and Community Connections. The program is paid for by a combination of school district support, grants, and in-kind donations, such as computer storage donated by Goodwill Industries of the Inland Northwest. The program has graduated more than 50 students so far, and has donated about 1,000 computers to needy families in the Spokane area.

Now, Johnson hopes to connect TEConnections students with local businesses that might need technical assistance to erase information from hard drives as they prepare to donate older equipment, in exchange for relieving them of disposal fees.

"I surround myself with partners" from the community to provide a web of support for students who learn leadership skills to use while helping the community organizations, Johnson says. The students also develop a desire to continue their education after high school, Johnson says.

Johnson says she started using students as computer support interns in part because of the logistics of maintaining computer labs in many locations.

She realized it would be easier to train some students in the summer than to build a team of experienced technicians, and instituted small summer tech camps for the potential interns, she says. Then, in 2005, along with some new teachers at Rogers and Lewis & Clark high schools, Johnson helped institute computer networking classes, programming classes, and repair classes during the school year.

In after-school clubs at Rogers and Lewis & Clark high schools, students repair and prepare computers that have been donated to Goodwill through Washington state's E-Cycle electronics recycling program. After working on the computers, the clubs donate them to needy families through nonprofit organizations, or through agencies such as the Washington state Department of Social and Health Services.

The students also provide the recipients with training to use the computers. Goodwill delivers computers to families that don't have a way to get the computers home.

TEConnections has blossomed into a growing community concern.

The students in the program now also are setting up computers used by nonprofits, both for internal use and to be used in community computer labs, where clients of the nonprofits who don't have access to computers or the Internet can use them. For instance, the TEConnections program has set up a lab with 10 networked computers at the Salvation Army, in Spokane, and at that nonprofit's Camp Gifford, at Deer lake, Johnson says. In exchange for the work at Camp Gifford, the nine TEConnections students who helped set up the lab there got to stay the weekend at the camp and received leadership training.

Johnson says now that TEConnections has some measured results behind it, she plans to focus on strengthening the program's community ties and making it a model that other school districts could replicate. This summer, Johnson says she plans to pay some of the program's more experienced students to help run slightly larger tech camps to provide training and coaching to younger kids, increasing the leadership training and mentoring of them.

"The computer is just the hook," Johnson says, to giving students a way to see higher education and community involvement in their future.

The program is also a way to get students work experience, paid or unpaid. Last summer, in cooperation with WorkSource's Next Generation Zone and Spokane Public Schools, the program hired 11 students, each of whom earned $10 an hour, or a total of about $1,500, for their work in the district over the course of the summer. The students got assistance in preparing resumes from advisers the program brought in, and were interviewed for the positions by professionals from the community.

Davisson was one of those students, and still works for the school district as a paid intern in the computer support department while attending classes at SCC. She now helps run a computer lab for students after school at North Central High School.

For Davisson, the program has meant a new vision for her future, and the confidence to go for it, she says.

"Soft skills is a biggie—working with people," Davisson says. She says going through leadership training and training others to use computers has helped her to be more confident and outgoing.