Going the distance: The future of restaurants and retail stores in the Inland Northwest 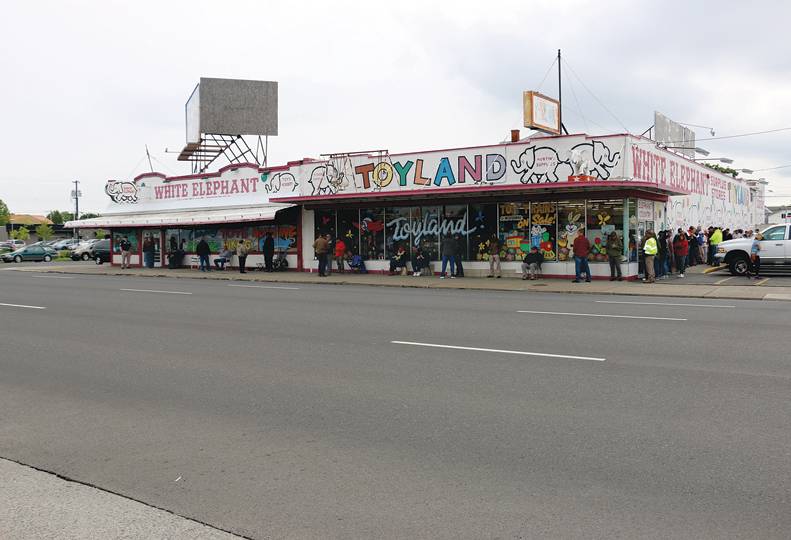 -KEVIN BLOCKER
Customers wait in a line that extends halfway around the building at the White Elephant store on Spokane’s North Side. The store is holding a liquidation sale and is scheduled to close soon.

On May 11, Bob and Barbara Materne celebrated the 39th anniversary of The Swinging Doors with little fanfare, because patrons weren’t allowed inside the North Side restaurant and sports bar at that time.

Despite the 73-day shutdown due to the state’s Stay Home order and the continued presence of the pandemic-related limits, the couple says they’re confident the restaurant will make it to 40.

But just north of downtown Spokane and in Spokane Valley, the Conley family, the longtime owners of The White Elephant toy and sporting goods store, announced on June 7 plans to shutter their operations and began liquidation sales two days later.

COVID-19 was one of a few factors that played a role in their decision to close, they say.

Meteorologists call a perfect storm an event in which a rare combination of circumstances multiplies the force of the event. From the perspective of financial forecaster Grant Forsyth, the perfect storm has deluged the U.S. restaurant and retail sectors, and he predicts parts of their landscapes may never look the same again.

“I’m worried for the restaurant industry,” says Forsyth, chief economist for Spokane-based Avista Corp. “With standards of social contact in place, how do you generate enough volume to be profitable?”

In its most recent report from April, the National Restaurant Association says the current health of, and outlook for, the industry is at an all-time low.

The association’s Restaurant Performance Index uses a rating in which value of 100 signifies no growth in the industry. A rating below that means contraction.

April’s RPI stood at 94.9, consistent with March’s rating of 95, according to the report.

“Although a majority of restaurant operators think overall economic conditions will improve over the next six months, they’re not optimistic about sales returning to pre-coronavirus levels,” the report says.

Lisa Emery, the Maternes’ daughter, is general manager at The Swinging Doors, located at 1018 W. Francis. Under social distancing protocols, she says, the restaurant has a maximum occupancy of 104, down from 208.

Despite the decreased seating, the restaurant pulled in $10,000 in sales on June 7, an amount equal to a typical, busy Sunday during the National Football League season.

“People were clearly tired of being at home and cooking on that day,” she says.

Still, she agrees there’ s a lot of uncertainty in the future. Short term, she questions whether football even will be played in the fall.

“If we can’t have large groups gathering in place for three to four hours to watch games, I can’t say we’ll be too excited to spend $7,200 on the league’s Sunday Ticket TV package,” Emery says.

In downtown Spokane, Steven Owen, the general manager at Incrediburger & Eggs, at 909 W. First, says despite reducing seating to 75, he and restaurant owner Adam Hegsted don’t want to revert to the restaurant’s original seating capacity in the long term.

“I don’t see us going back to seating 150,” Owen says. “Fewer tables in here opened this space up and showed off just how really attractive it is. It feels more inviting in here. That part of it really has been a bit of a blessing in disguise.”

Though not in response to COVID-19, Owen and the restaurant’s eight employees debuted mobile meals via their IncrediTruck starting in March, as Hegsted and Owen had planned since last year.

Between a Payroll Protection Program loan and selling meals from the truck, the restaurant managed to retain eight of 10 employees.

Owen believes restaurants that can create nontraditional ways of doing business, with smaller and more flexible staff, will be the ones to survive the pandemic and create a new business model moving forward.

“Now, managers have to know how to cook. Cooks have to learn how to operate the front of the house, if necessary. The pandemic has changed our approach indefinitely,” he says.

The retail sector of the economy faces the same uncertainties as restaurants, according to Forsyth.

“There’s always a certain amount of churn going on in retail,” says Forsyth. “But where we are now is unheard of.”

Retiring baby boomer business owners and the virus – which generated a boost in online shopping due to stay-at-home orders – has created an assortment of changes in the way entrepreneurs traditionally do business and the way consumers interact within the marketplace, Forsyth says.

“The fact is local retailers were under pressure before COVID,” Forsyth says, pointing to growing online sales. “The speed of (online) delivery is faster than it’s ever been. Maybe if you’re a specialty shop, but even then, it’s still going to be tough to maintain a profit.”

Adds Forsyth, “My guess is that the boost to online sales will be permanent.”

At a national level, the retail and technology data firm Coresight Research reports that as many as 25,000 stores could close permanently this year.

Most of the closures are expected to occur in shopping malls, with department stores and clothing shops predicted to be among the hardest hit.

Though not located in a mall, The White Elephant is set to close after 74 years in business.

Brothers Rich and Patrick Conley, and Patrick’s wife, Mary, run the business. The brother’s father, John R. Conley, started the business in 1946 after returning from service in World War II.

Now at retirement age himself, Rich Conley says Forsyth’s observations about the current retail climate are precisely why they decided to shutter the stores.

“We’ve been exploring options to restructure for some time,” Conley says. “But with the increasingly complicated retail environment, closing is the best option.”

A few blocks north of The White Elephant store in Spokane, The General Store, at 2424 N. Division, is seeing circumstances differently.

The General Store was founded by Bill Barnay and now is owned by his son, Bruce Barnay.

Though it sells recreational, sporting goods, and clothing, The General Store has partnered with ACE Hardware to carry its brand of tools and hardware.

McKee, who took over as general manager almost a year ago, says he hired the company’s first e-commerce manager to help The General Store develop its online presence to boost sales.

“The key for retailers moving forward is online and delivery,” McKee says. “Then find a way to be relevant on a daily basis. Being deemed essential was critical for us.”