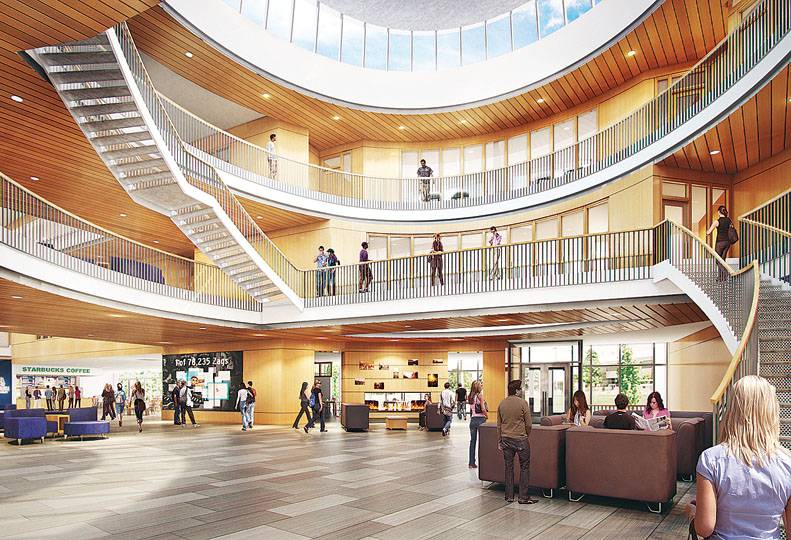 -Gonzaga University
This rendering shows the interior of the John J. Hemmingson University Center as envisioned by the design team of Opsis Architecture, of Portland, and Bernardo|Wills Architects PC, of Spokane.

Chuck Murphy, Gonzaga’s vice president for finance, says the $53 million bond issue will augment Gonzaga’s capital campaign, which is spearheaded by a $25 million gift from John Hemmingson, a trustee of the university for whom the center will be named.

Together, the bond and campaign funds will finance the $60 million John J. Hemmingson University Center and related projects at the Jesuit school, Murphy says.

The bond issue includes $33 million in tax-exempt bonds, which carry a lower interest rate than other market-rate financing alternatives, resulting in savings of $12.8 million over the 30-year life of the bonds, he says.

Gonzaga students will benefit from the savings, Murphy says. “Gonzaga is primarily a tuition-driven institution,” he says. “Any savings will result in lower costs to our students.”

The 168,000-square-foot, four-level  university center, which also will be referred to as The Hemmingson, will accommodate student dining and other student services, study lounges, work spaces, meeting rooms, a multipurpose ballroom, the university ministry, and the Center for Global Engagements.

The center will replace the university’s former 35,000-square-foot Center of Gonzaga student union building on the west side of the campus, at 702 E. Desmet. Gonzaga razed the COG and began construction on the project last summer. The Hemmingson is expected to be completed in August 2015.

Hoffman Construction Co., of Portland, is the contractor on the project, and Opsis Architecture, also of Portland, designed it. Bernardo|Wills Architects PC, of Spokane, also is on the design team.

Gonzaga, which has a 131-acre campus in Spokane’s University District east of downtown, lists its current enrollment at 7,600 students.

Hemmingson, a Montana native who has lived in Post Falls for more than 20 years, is an entrepreneur with a background in a range of industry sectors including education, insurance, real estate, technology, and agriculture. In addition to serving on the Gonzaga board, he is a founding board member of The Rypien Foundation and serves on boards of several other nonprofits.

Gonzaga credits Hemmingson’s $25 million gift, which is the largest in the history of the university, as making the university center and other campus initiatives possible.