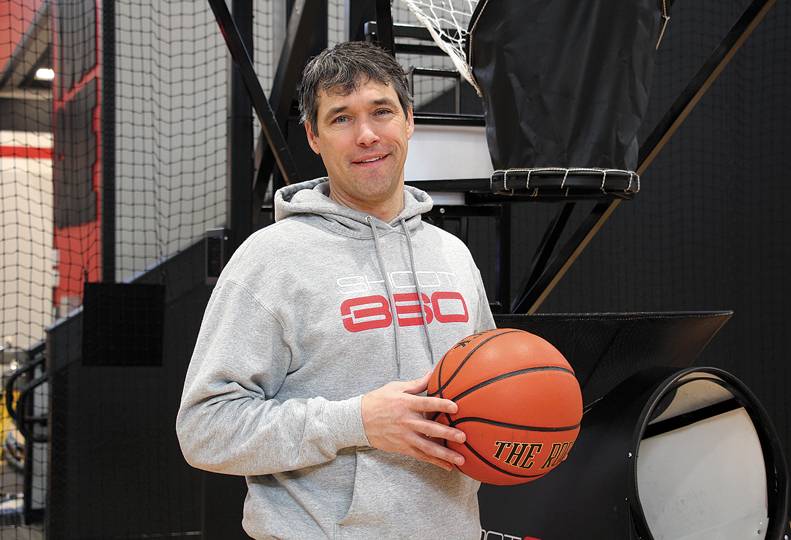 At the Journal’s press time, the facility was scheduled to open Wednesday, Nov. 17, in a 12,000-square-foot, newly constructed building at 3700 E. Francis.

“Spokane is a great basketball city, whether it’s the high-level stuff like Gonzaga, the amazing basketball community partnerships at Hoopfest, or the interest that so many people have in basketball,” he asserts.

All of the full-time coaches are former basketball players, Dickau says.

“A lot of them played in college and professionally,” he says. “We’ve got a good mix of ages and experiences with the coaches we’ve hired.”

Shoot 360 is a Vancouver, Washington-based franchise that offers technology that tracks and analyzes an athlete’s performance in real time. Nearly 30 Shoot 360 franchise locations are located throughout the U.S.

Dickau says he’s been familiar with the franchise for nearly a decade. He’s originally from the Vancouver, Washington, area, and regularly returns to visit family.

“Every time I would go to Vancouver with my family, I would typically take my boys to Shoot 360,” Dickau says.

He’s been considering opening a training facility in Spokane, but the logistics of finding and operating such a facility proved difficult. Early this year, Dickau decided it was time to bring Shoot 360 to Spokane.

“We have five shooting stations, which have instant audio and visual feedback for shooting analytics,” Dickau says. “At the skills stations, you’re following a workout in front of you that you’re seeing on four large TVs that are combined to make one behind bulletproof glass.”

At skills stations, an overhead camera registers athletes’ movements to track and analyze their performances as they run through video-guided workouts, play passing, and skills competition games.

“You’re testing your accuracy, your reaction time, as well as your ability to discern if that’s the correct path or not,” Dickau says.

A basketball court—about 10 feet shorter than a regulation high school court—also will provide space for members to work one-on-one and in small groups with coaches. Coaches will provide feedback based on machine analysis, Dickau says.

Dickau says there’s no age limits on who can be a member, but members must be able to shoot a basketball into a regulation 10-foot basketball hoop. Dickau’s youngest son, a third-grade student, is a big fan of the facility, Dickau says. At other Shoot 360 locations in the U.S., some members are in their 70s.

Workouts and games can be adapted to the skill level and height of an individual player.

Dickau says he eventually plans to host adult shooting leagues, clinics for small children, and other offerings for a variety of age ranges.

Dickau says more than 35 people already have signed up for pre-membership evaluations.