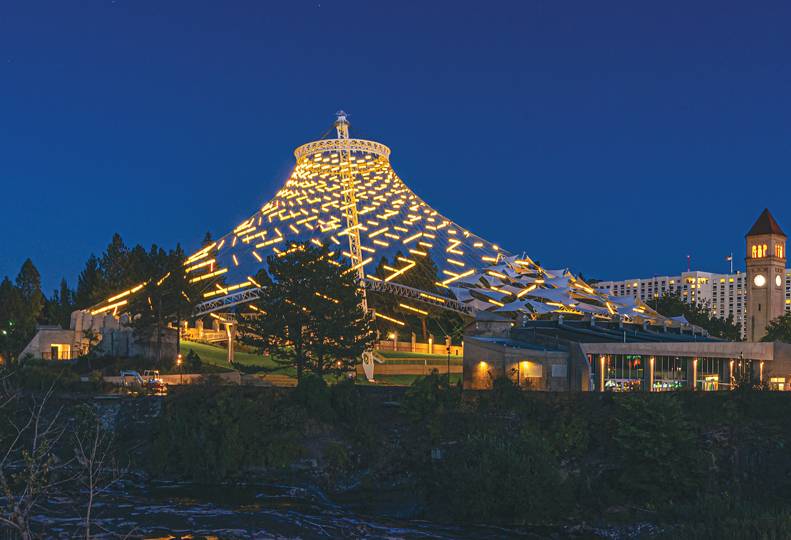 Leaders cite past big endeavors, such as the creation of Riverfront Park for Expo 74, as the type of projects possible with collaboration.

Spokane and surrounding municipalities are receiving nearly $209 million in federal American Rescue Plan funds, and some business leaders want to see that money go toward an Expo 74-esque collaborative effort that could be transformative to the region.

Federal guidelines, however, might already have created a bureaucratic barrier to such a grand effort.

Ezra Eckhardt, president and chief operating officer at Liberty Lake-based STCU, says it’s important that community leaders engage in this conversation and voice their support and desire for regional collaboration of long-lasting projects, otherwise, each municipality will simply focus on spending the funds within their own jurisdictions without regard to the bigger picture.

“We don’t want to end up in a position where we are penny wise and pound foolish, and spread the $200 million across so many different activities, that we diffuse the value of the program over time,” he adds.

The American Rescue Plan Act of 2021 is a $1.9 trillion economic stimulus bill intended to speed up the country’s recovery from the economic and health effects of the COVID-19 pandemic. Last May, entities in the greater Spokane area received the first installments of a collective payout of more than $200 million.

Eckhardt, along with 16 other community leaders, including current and former chairs of Greater Spokane Incorporated, bankers, and people who have long-term investments in the Spokane community, put together a document outlining five basic guidelines on how the funds should be spent: connecting people to resources, bolstering local businesses, advancing the creative economy, funding the community infrastructure, and finding ways to generate more funds.

“With the ARP funds, our combined collective community has been given a once-in-a-lifetime gift of financial resources. How can we best align activities so we can open up new and unexpected doors to the future?” Eckhardt asks.

The Spokane community has a long history of coming together and working toward big impactful projects, he adds.

Dennis Vermillion, president and CEO of Avista Corp. and one of 16 community leaders to sign the guidelines document, adds that an example of such a project that comes to his mind is the University District.

“It was an effort where people came together and painted this vision and look at what we have done there. It’s a wonderful part of town that has brought medical schools here,” Vermillion says.

Looking back at recent history, many great things have happened when people have come together to collaborate, brainstorm, and collectively invest and envision ways to improve the community, he asserts.

Barry Baker, president and CEO of Baker Construction & Development, Inc., is another community leader to sign his name to the guidelines document, voicing support for regional collaboration. As a long-time builder and developer, he has been part of some of the region’s past collaborative projects.

“I think the ARP funds are an opportunity to do something big,” Baker says. “We never have enough money. Now that the door to the candy store is open, let’s figure out a recipe to make more candy.”

However, past projects such as Expo ’74, the creation of the University District, and the West Plains Public Development Area were championed around a specific vision by groups and community leaders to raise funds toward these goals.

With the ARP funds, entities within the greater Spokane community have been assigned the funds before consensus has been reached about how to spend them.

Furthermore, federal regulations confine the funds to be used only within certain categories, and within municipal boundaries.

“It doesn’t prevent us from having a third party that can administer that money,” he says. “The overall concept of doing regional things is possible. It’s just a question of dotting the i’s and crossing the t’s.”

Last week, the Spokane City Council approved nearly $14 million in COVID relief funding from the city’s total expected $80 million in ARP funds. Among the funding priorities, the Council allocated $6 million toward affordable housing and $2 million toward a down payment program to assist first-time homebuyers with income below 80% of the average median income. Additionally, $1 million will go toward child care, $1 million for people employed in the arts, and another $1 million for play equipment and bathroom upgrades in parks, with a priority of those located in low-income communities.

Beggs says the city’s housing, child care, and economic development initiatives are being done in such a way that the Spokane County and Valley can come alongside and align their goals.

“We are reaching out directly to the county, Valley, and schools and saying, ‘we are doing these projects, and we are happy to model our criteria with your criteria,’” says Beggs.

Beggs says that he was recently invited by Spokane County Commissioner Mary Kuney to a meeting in which he believes they will discuss regional programs such as a college-for-all program and a film industry incentive.

However, he believes that any true regional collaboration with the county and Valley will be rare because of the regulations and stipulations that the U.S. Department of Treasury has attached to the ARP funds, which make it difficult to move money into a joint fund.

Because the funds come with so many stipulations, the City Council also approved a full-time administrative position for the three years in which they will be allocated in addition to employing an accounting firm for the city to seek advice on how to spend the funds without risking noncompliance with Treasury rules.

Spokane County Commissioner Josh Kerns says he’s noticed that when talking with community members, many seem to think that the ARP funds are the same as the Coronavirus Aid, Relief, and Economic Security Act of 2020 and the process involved in dispersing those funds to the community.

The county received $91 million in CARES funding, which the board of commissioners quickly dispersed with the understanding that if the aid could be tied broadly to COVID, it could be approved.

With ARP funds, there are seven categories within which the funds can be allocated, each category having its own rules and restrictions. The categories are: supporting the public health response, addressing economic impact caused by the public health emergency, serving the hardest hit communities and families, replacing lost public sector revenue, providing premium pay for essential workers, investing in water and sewer infrastructure, and investing in broadband infrastructure.

Another common misconception that both Kerns and Beggs noted is a general belief that the local government will be the one coming up with the big ideas and dispersing the funds.

Rather, each municipality is required to go through a public-engagement process to solicit feedback from the community regarding priorities for using ARP funds.

The city of Spokane launched a survey last summer on the ThoughtExchange platform, which allows users to propose their own ideas and rate the ideas of other users.

Beggs says that, in addition to the survey, council members also went to three high schools where they set up tables, each themed on the most popular ideas, and engaged the community. They asked anyone with ideas on what to do with the city’s $80 million to send the Council an email, and hundreds of responses have been received.

Regarding the city’s process for allocating funds, Beggs explains that a working group reviews the ideas and makes proposals to the Council and mayor’s office. If the majority of the Council approves an idea, it then goes to a “meta group” that works on requests for proposals from prospective recipients of the funds.

For the city, the top priority came down to affordable housing, he says.

Kerns says that priorities identified in the county’s survey include support for aiding the negative economic impact of the pandemic, and public health.

“I don’t know if that’s the same as the city, but I’d be willing to split the cost so the funds can benefit the people regionwide,” says Kerns.

This month, the county is expected to publish a plan indicating what percentage of the funds will be released in 2022 and in which categories the public will be allowed to submit requests for proposals.

One idea with the potential for long lasting and impactful benefits to the community that has been proposed and supported by community leaders is the city’s need to build affordable housing.

Ben Stuckart, director of the Spokane Low Income Housing Consortium and former Spokane City Council president, has been pushing for ARP funds—and money from other sources—to be used to create a land bank for affordable housing.

A land bank is a large collection of parcels that is either owned by public or private entities for future development. Stuckart says that one of the biggest barriers that low-income housing developers face is that in the financing of low-income housing, developers are required to have the land before they can apply for funding from state and federal agencies.

He contends a land bank would remove that barrier by setting aside land until it is ready for development or homeownership.

A land bank also would fulfill the fifth guideline suggested by Eckhardt and other community leaders: generating income.

“It actually creates an ongoing revenue stream for the land bank that can be continually reinvested back into land, because you are leasing out the land to agencies,” he asserts.

Eckhardt says that he is working with leaders at STCU, Canopy, Numerica, Horizon and several other credit unions to support the idea of building out the land bank.

“Ben has a very specific plan in how he wants to tap into state-acquired land and create a central location to make that land available and accessible to builders who are specifically targeting low-income, affordable housing, and workforce housing,” says Eckhardt.

Two years ago, the city had put together a culminating document that identified a shortage of up to 6,000 housing units, says Eckhardt, adding that he believes that number could be as high as 10,000 now.

“I think affordable housing is a critical part of our long-term infrastructure. We have to devote resources that will allow people to build housing opportunities that are affordable to our communities,” he adds.

Stuckart says he has been sending the city and county proposals since June and is frustrated with the slow action of local governments.

Stuckart says he also would like to see regional collaboration of a large project, whether it be housing or something as impactful as investing in early childhood education.

“This is a once-in-a-lifetime opportunity to invest in things that can make a huge difference in Spokane’s future,” he says.