Big library projects are on the books 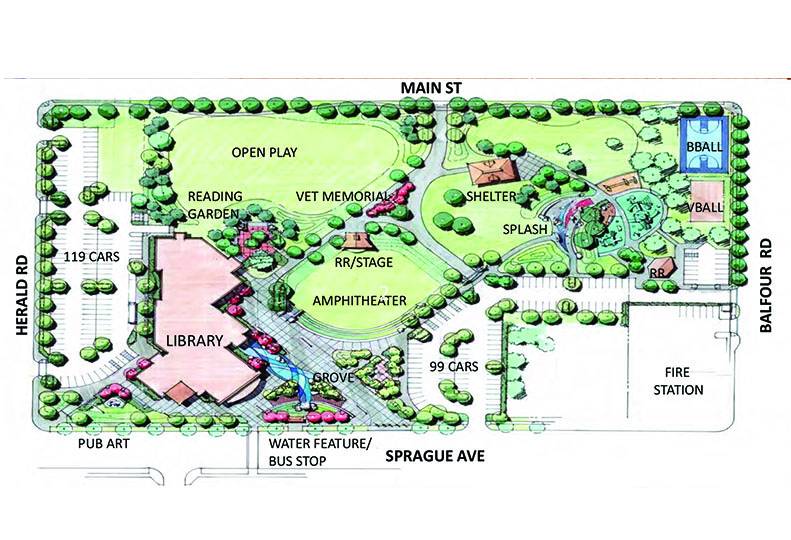 -—Rendering courtesy of Bernardo|Wills Architects PC
A new Valley branch of the Spokane County Library District could be built on vacant land north of Sprague Avenue. The city of Spokane Valley is considering a Balfour Park expansion on land neighboring the proposed library site.

With a recent site-plan approval from the Spokane Valley City Council in hand, the Spokane County Library District says it expects to seek approval from county commissioners next month to put a $22 million bond measure before Valley voters next spring that would fund construction projects for three library branches.

The largest project would be a new $15 million Valley branch building on Sprague Avenue, near Balfour Park, which would replace the aging Valley branch facility at 12004 E. Main, says Jane Baker, a library district spokeswoman.

Other library projects that would be included in the bond include a new 10,000-square foot library branch on Conklin Road, near Sprague Avenue, and a 6,000-square-foot addition to the Argonne branch, at 4322 N. Argonne, Baker says.

The Valley branch project, which would be the first project constructed with bond funding, would be located on a 2.8-acre portion of an 8.4-acre parcel the city of Spokane Valley bought a year ago next to Balfour Park, northwest of the Balfour Road-Sprague intersection. At the library district's urging, the city acquired the parcel for $2.5 million from the Pring Corp., of Spokane Valley.

The library and an associated parking area would be next to Herald Road on the west side of the property.

"It just worked out that's a good location," Baker says. "It's not too far from where the library currently is."

The Spokane County Library District has a five-year option to buy the planned branch site from the city of Spokane Valley if it can secure funding. If the district doesn't secure funding in that time, the city would have the option of developing the entire parcel as a park.

Meantime, the city of Spokane Valley is planning a 5.6-acre expansion of Balfour Park at an estimated cost of $4 million to $5 million, says Mike Stone, Spokane Valley Parks and Recreation director. The park expansion would be funded separately from the bond measure through city and grant funds, Stone says.

Balfour Park currently takes up a quarter-block of land at the southwest corner of Balfour Road and Main Avenue, just north of Spokane Valley Fire Station No. 1. The park has a sand volleyball court, picnic tables, play equipment, restrooms, and parking.

"We hope it will be a community gathering space and a catalyst for economic development," Stone says, adding that the city of Spokane Valley doesn't have any other parks that border Sprague Avenue.

Should the bond measure pass under the library's best scenario, Stone says, "We could be initiating design work and breaking ground on the park expansion in mid-2015."

A consultant on the library and park proposal, Bernardo|Wills Architects PS, of Spokane, has drawn up the joint site plan for it.

The proposal isn't the first attempt at a partnership between the library district and the city of Spokane Valley. Voters rejected a $33.4 million bond measure in 2008 that had been proposed to fund a new library and city hall as the heart of a Sprague-Appleway revitalization plan, much of which since has been scrapped.

The entities hope the plans for the Balfour property are less controversial.

That project would be followed by the other Valley-area library projects.

"As soon as we start construction on the Valley branch, we would start designing the Conklin branch, followed by the Argonne expansion," Baker says.

The Valley branch on Main has outgrown the three-story structure with its 22,900 square feet of floor space, Baker says. The building was constructed in 1955 and was last remodeled in 1986, she says.

The envisioned single-story Valley branch building would have 30,000 square feet of floor space. It would have more space for meetings and, as a single-story structure, would be configured in a more efficient manner without elevators and stairways, Baker says.

While the new Valley branch would have more total floor space, it wouldn't need as many employees as are required to staff the current three-story branch, she says. With the planned new Conklin branch and the expansion of the Argonne branch, though, the district's employee count likely would remain level, Baker says.

"We're not anticipating any layoffs," she says.

The Spokane County Library District, which operates 10 library branches, has 174 employees, she says. The Valley branch, which is the busiest in the district, is assigned 28 employees.

Up to a third of the Valley employees eventually would be assigned to the Conklin branch, Baker says.

Library usage is on an upward trend, Baker says, adding that the district's library card applications have risen 12 percent in the past year.

Spokane Valley Parks & Recreation operates a dozen parks, most of which the city inherited when it incorporated in 2003.

Since incorporating, the city has developed Greenacres Park, at 1311 N. Long Road, and Discovery Playground, at 2426 N. Discovery Place, within Mirabeau Point Park.