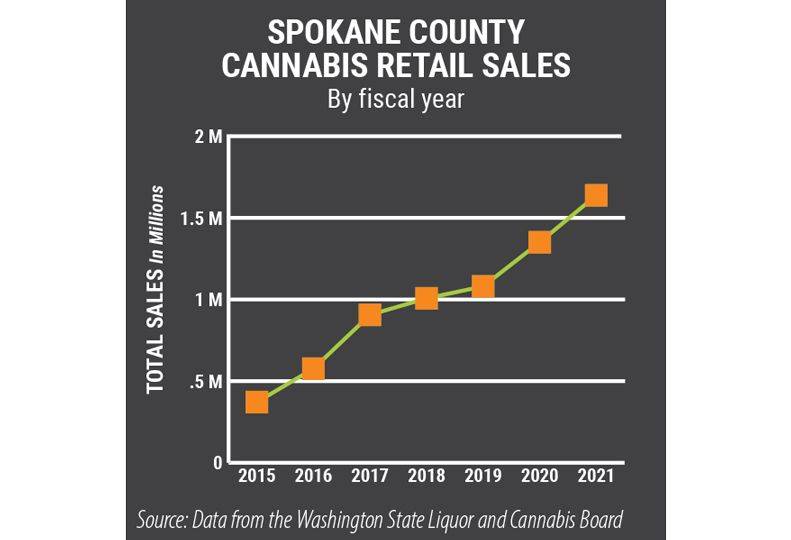 Sales of recreational cannabis in Spokane County increased 21% in fiscal year 2021, falling short of the aggressive surge the industry experienced in fiscal 2020.

Data recently released by the Washington state Liquor and Cannabis Board shows $163.7 million in recreational cannabis retail sales at stores in Spokane County between July 1, 2020, and June 30, 2021, up from the previous year’s total of $135 million in sales. At a 21% increase, that’s a slightly slower rate of growth compared with the fiscal 2020 year-over-year increase of about 25%.

Spokane County ranks third in terms of total recreational sales by volume out of all counties in Washington, behind King and Pierce counties.

Doug Peterson, owner of Locals Canna House, says sales increases at his Spokane Valley-based shop have been more modest and seem to be stabilizing after the sharper increase the industry experienced in 2020.

“Last year, we saw pretty significant growth. We saw a (sales) increase of about 15%,” Peterson says. “This (next fiscal) year, we might see 5% up from last year.”

“When you consider it’s third in sales and fourth in population, there’s obviously more per capita sales in Spokane County than there are elsewhere,” MacRae says.

MacRae speculates that border counties such as Spokane County might see increased per capita sales due to out-of-state buyers.

In fiscal 2021, Spokane County represented 10.9% of the state’s total excise taxes collected from cannabis retail sales, according to LCB data.

“Only four months (of fiscal 2020 sales) were impacted by COVID,” MacRae says. “This year, COVID has been around for the entire fiscal year.”

MacRae says some people felt the need to stock up on cannabis at times, while others were buying more cannabis as a way to help them cope with the enduring pandemic.

“In the fall and into the winter, COVID rates went through the roof, and people who thought it would be over within a year began to realize it wasn’t going to be,” MacRae says.

It’s likely that increased cannabis usage will continue to buoy sales in Spokane County and throughout the state, MacRae speculates.

“Whatever lifestyle changes people have implemented that are affiliated with the increase in consumption of regulated cannabis seem to have persisted,” he says.