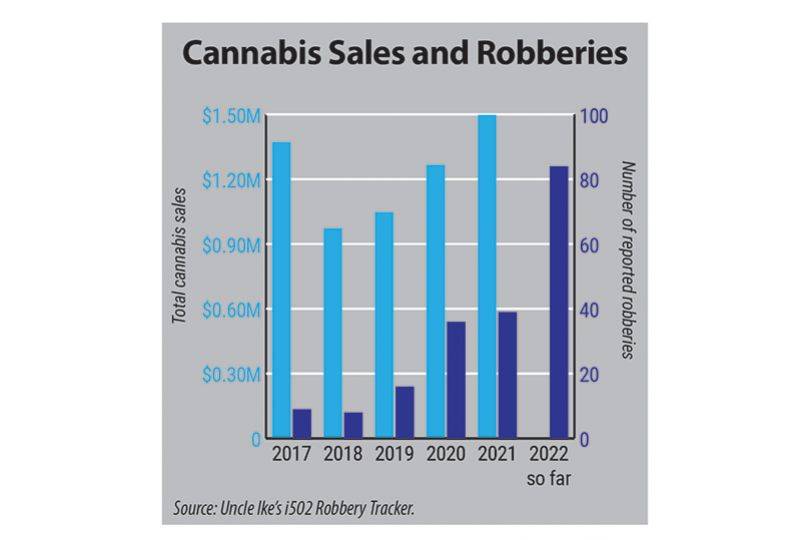 In response to a series of armed robberies in the Puget Sound area, the Washington state Department of Financial Institutions and the state Liquor and Cannabis Board are collaborating to solve the problem of an industry that historically has been cash-based.

Brian Smith, director of communications for the Liquor and Cannabis Board, says the conflict between federal and state laws is to blame for Washington cannabis retailers’ widespread use of exclusively cash transactions.

“Because cannabis is a Schedule 1 controlled substance at the federal level, there are banking laws that are attached to those things that prevent people from using a debit or a credit card that you would use at any other business,” Smith says.

On April 19, the Department of Financial Institutions and the Liquor and Cannabis Board released a joint bulletin clarifying to cannabis retailers what cashless options are allowed under state law. A state law that went into effect in 2018 allows cannabis retail licensees to use payment services.

“The rule allows retailers to engage in business with third-party vendors to allow for cashless transactions with customers,” the joint bulletin states. “Transactions may be conducted through an app on the customer’s phone.”

A cash-based industry is problematic for several reasons, Baugher says.

“It’s expensive, to start with. You have to count it, you have to secure it, you have to transport it,” he says. “From a regulatory standpoint, it’s the least transparent method of transacting overall. It’s a burden on the consumer, also, because they have to carry cash into these establishments.”

Baugher declines to reveal the total number of cannabis retailers POSaBIT serves, but says it’s in the hundreds, a few dozen of which are located in Eastern Washington.

POSaBIT requires bank statements for the cannabis retailer, as well as attestations from the retailer’s financial institution.

“We require the bank to attest to the fact they know the merchant is a cannabis operator,” Baugher says. “We have to make sure that we’re mitigating our banking partners’ risk by providing all of that transparency.”

As previously reported by the Journal, Numerica Credit Union chose to work with cannabis retailers in an effort to reduce risk for the community, chief risk officer Lynn Ciani said in a 2019 interview.

“Our board of directors felt part of fulfilling our mission to build communities is protecting our communities to the extent we can by taking the cash off the street,” Ciani said.

Of the robberies in 2022 so far, nearly all have occurred in cannabis shops in the King County. However, one armed robbery was reported in Spokane County in February, at The Top Shelf, located in Airway Heights,  at 1305 S. Hayford.

“The violence has been shocking,” Smith says.

In March, three armed robberies of cannabis shops on the West Side resulted in fatalities; two of the three fatalities were suspects in the robberies, while the third was an employee at a Tacoma cannabis retailer.

On May 3, the Metropolitan King County Council’s Law, Justice, Health and Human Services Committee passed legislation that would establish a Cannabis Safety Taskforce.

Additionally, the taskforce would request an analysis of how $4.6 million in marijuana tax revenue which was cut from the King County Sheriff’s Office funding in the 2021-22 biennial budget is being used.

The legislation will be heard at the May 17 meeting of the Metropolitan King County Council.

Smith says there could be multiple causes behind the rash of armed robberies in the Puget Sound area.

“There could be an organized link behind some of it,” Smith says, adding, however, “Some of it appears to be random.”

Despite retailers having the option of cashless transactions since, Smith says few have adopted such systems.

“While many of the businesses know that this exists, many of them are wary that the state actually allows it,” Smith says.

Baugher says that in states that have more recently legalized cannabis retail operations, adoption rates of companies such as POSaBIT are higher than in Washington.

“In other states … there isn’t this history where the industry launched as cash-only and has largely stayed that way,” Baugher says.

Smith says that many retailers and state legislators have expressed frustration to him that the proposed federal Secure and Fair Enforcement Banking Act hasn’t been passed into law.

The SAFE Banking Act was initially introduced by Colorado Rep. Ed Perlmutter in 2013. It most recently died in the U.S. House of Representatives in 2021.

“It’s passed the House six times, but it’s been unable to get through the Senate,” Smith says.

The SAFE Banking Act would protect banks and credit unions by barring federal banking regulators from limiting or terminating deposit insurance for financial institutions serving the marijuana industry in states that have legalized cannabis.

The SAFE Banking Act also would prohibit regulators from discouraging banks or credit unions to allow such services.

“In Washington, we have already legalized cannabis and begun the work of expunging eligible convictions,” the op-ed states. “But we cannot shield banks from the legal liability brought by congressional inaction.”

While legislators and state organizations work to find ways to make the cannabis retail industry more secure, Smith says retailers are taking action to protect themselves.

“Here on the West Side, we hear that people are upping their security, such as having armed security at the store,” Smith says.

He adds, “That’s a change from just a few years ago. It’s a big step, to have someone with a gun on your premises, but the intensity on the west side of the state has led some to explore that option.”

Baugher claims the recent rash of armed robberies also has spurred more cannabis retailers to explore cashless transaction options such as POSaBIT, rather than choosing the expense and risk of hiring armed security.

“It’s better to be able to put a sign on your door that says we have less than $100 in cash on-hand, or we are a cashless business, or we’re debit-only,” Baugher says.