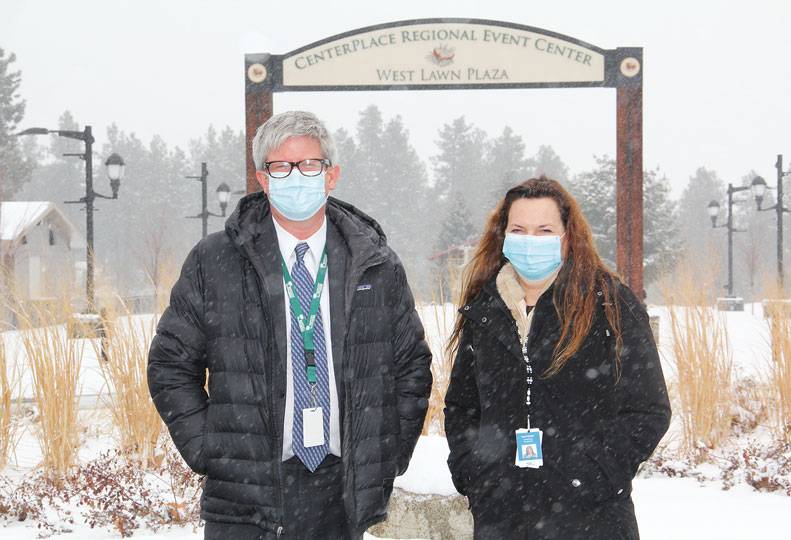 The CenterPlace Regional Event Center’s recently renovated West Lawn, formerly an empty grassy knoll, has been transformed into a modern event space that managers of the facility say has the potential to draw new events to the region.

Carol Carter, coordinator at CenterPlace, says she’d like to see community groups use the space for potential new events like a music in the park festival; movies in the park, or a hypothetical theater in the park. She adds she’d also like to see more food-based events.

John Bottelli, the new director of the city of Spokane Valley Parks & Recreation department, adds, “I think with the addition of the West Lawn and the new hotel outside, we’re going to be able to land some events that weren’t quite able to be brought in before.”

The 54.2-acre CenterPlace campus, located at 2426 N. Discovery Place, is owned by the city of Spokane Valley and managed by Spokane Valley Parks & Recreation.

The $2.2 million West Lawn work is the first extensive update to the CenterPlace Regional Event Center since it was built in 2005.

The updates to the West Lawn occurred over two phases starting in 2018. The first phase involved the modification of berms, swales, and dry wells to level the West Lawn. Workers also graded the meadow north of the event center, and installed electricity, irrigation, and sod to create more space for events.

As the campus abuts a highly traversed roadway, trees and fencing also were installed to create a natural barrier.

The entire lawn is lined with fencing, which will allow more control over ticketed events.

Phase two included the addition of more vendor space, a concert stage with space for dancing, and an area for food trucks.

A centrally located, stone plaza lined with trees was installed for event space. Ground anchors, which are metal loops used to tie down large objects like tents, line the plaza in 20-foot increments, so guests can erect tents on the space without having to bring large water buckets or barrels to secure them.

Electricity, lighting, restrooms, a concession stand, and a storage building also were installed.

The budget for phase two was about $2 million. Work on the project was completed early this year, about six months past the original expected completion date because of pandemic-related delays, says Carter. The city of Spokane Valley funded the project.

Michael Terrell, of Michael Terrell-Landscape Architecture PLLC, in Liberty Lake, consulted on the project. AM Landshaper Inc., of Spokane, did the phase one work, while phase two was completed by Wm. Winkler Co., of Newman Lake.

Guests can rent a full day on just the West Lawn for $2,000, says Carter. Prior to the upgrades, the West Lawn was only available for use in conjunction with the rental of CenterPlace for an event, typically for weddings.

CenterPlace has 400 parking spots. Carter notes that the venue, regardless of which portion of the CenterPlace complex is rented, will only be rented for a single event at a time to ensure adequate parking.

As of early February, about six events have been penciled in for this year at CenterPlace, four of which will be community events.

“Those are basically penciled-in reservations because we’ve been waiting for things to possibly change,” says Bottelli.

Carter adds that Gov. Jay Inslee’s announcement this month allowing the region to move to Phase 2 of his Roadmap to Recovery plan will allow some planned events to move forward this year. A few, like Valleyfest, are waiting until venues are allowed to host more than 200 people, she says.

“And those (are events) that wouldn’t necessarily take advantage of the West Lawn,” adds Bottelli.

On average, 18 to 20 events used the West Lawn annually prior to the improvements, says Carter.