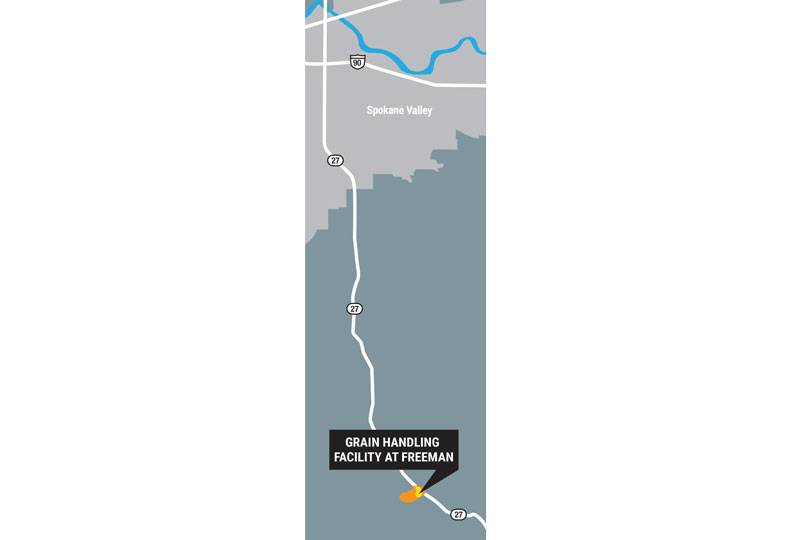 The Washington state Department of Ecology is seeking public input through Feb. 2 on proposed multimillion-dollar plans to clean up contamination at the grain elevator in the Freeman area, about 13 miles south of Spokane Valley.

Sandra Treccani, site manager with Ecology’s Eastern Region, says the plume of carbon tetrachloride spanning a half-mile underground originates from a seasonally active grain-handling facility located at 14603 S. State Route 27. The contamination was discovered in the groundwater beneath the Freeman School District, which includes an elementary school, a middle school, and a high school. Additionally, testing found contamination in the wells of three households near the grain-handling facility.

“The plume is underneath the Freeman school, and then it goes downgradient, basically downstream in the groundwater, to the southwest,” Treccani says.

Carbon tetrachloride historically was widely used as a pesticide in grain storage facilities, according to a remedial investigation and feasibility study report Ecology commissioned from the Spokane office of Dallas, Texas-based Jacobs Engineering Group Inc.

According to the U.S. Environmental Protection Agency, the solvent can affect the liver, kidneys, and central nervous system in someone exposed to it through inhalation, ingestion through contaminated drinking water, or direct contact such as bathing in contaminated water.

Union Pacific Railroad Co. is the primary responsible party for the cleanup, the report states. Union Pacific owns the property beneath 11 steel grain silos and bins and a steel grain elevator, as well as an underground receiving pit, and the railroad line that passes through the site.

Ecology has presented two possible cleanup methods for the site, which officially is called the Grain Handling Facility at Freeman in state and federal documents.

Treccani says that one method, which Union Pacific has said it prefers, is colloquially called pump-and-treat among ecologists. In this method, one or more wells would be installed to pump contaminated groundwater up to the surface, where a treatment facility would remove carbon tetrachloride and return the treated water underground.

Ecology estimates the pump-and-treat method would be in operation for about 17 years at a cost of $12.7 million.

The other method is called a permeable reactive barrier. It involves pumping compounds into the ground that form a barrier to catch carbon tetrachloride and alter its chemical state as the contaminated water flows through the barrier, similar to the way debris is filtered from a river by a dam.

The department estimates the permeable barrier treatment would take 32 years to complete at a cost of $12.6 million.

Treccani contends the pump-and-treat system is preferable because it’s a widely used method and is better suited to the underground geology of the area surrounding the grain-handling facility.

“(Pump-and-treat) has been in use for 30 or more years at cleanup sites around the world,” Treccani says. “The other option is a newer technology, and it’s less certain because of the way the groundwater moves at the site — it flows in fractures of the bedrock.”

After the public comment period ends, Ecology will make any necessary modifications based on the comments, then finalize the remedial investigation and feasibility study. Ecology will then create a cleanup action plan and put together a legal document that requires Union Pacific to use the cleanup method Ecology determines is best.

“It can take upwards of a year to write that cleanup action plan and then to go through legal negotiation,” Treccani says.

In the meantime, Ecology is close to implementing an interim cleanup solution.

Treccani says the department took public comments last spring on the proposed interim cleanup action and has been working to put its chosen temporary method—a downsized version of the pump-and-treat system—in place.

“We will have that in place in March,” Treccani says. “We’ll run it and determine if one well is enough. If it’s not, we’ll have the opportunity to add additional wells. Whatever additional time it will take us to negotiate these other documents, it won’t be time that the public has to wait for a system to be turned on.”

The EPA declared the Grain Handling Facility at Freeman a Superfund site in 2015. The Superfund designation gives the federal agency authority and access to funds to oversee long-term cleanup of hazardous contaminants, often with participation by state and local government entities and, when possible, parties responsible for the contamination.

According to the report, the grain elevator was built around 1955 by Rockford Grain Growers Inc. In 1993, Minnesota-based agribusiness Cenex Harvest States Cooperatives, which has since rebranded as CHS Inc., bought the business and the grain-handling facility.

“Given that they provide water to all of the students and faculty in the school system, they’re required by the (Washington state) Department of Health to periodically monitor their water,” Treccani says.

In 2013, the school district implemented an air-stripping groundwater remediation system, which uses air bubbles to pull contaminants from water, she says.

Carbon tetrachloride also was discovered in the wells of three homes near the grain facility. Treccani says Union Pacific has provided two of the three homeowners with carbon filter systems. The third homeowner declined treatment in favor of pursuing other remediation.

While the chemical has been detected in other residential wells in the area, it’s present at less than five parts per billion, low enough that treatment isn’t required yet. Treccani says Union Pacific tests samples from its own monitoring wells in the area quarterly.

“We’re monitoring those water systems to make sure that the concentrations we’re seeing are not at levels that represent a risk to the people drinking the water,” Treccani says.

Treccani says comments and questions can be submitted to her via email at sandra.treccani@ecy.wa.gov. If 10 or more people request it, an online public meeting will be held before Ecology drafts a cleanup action plan, she says.