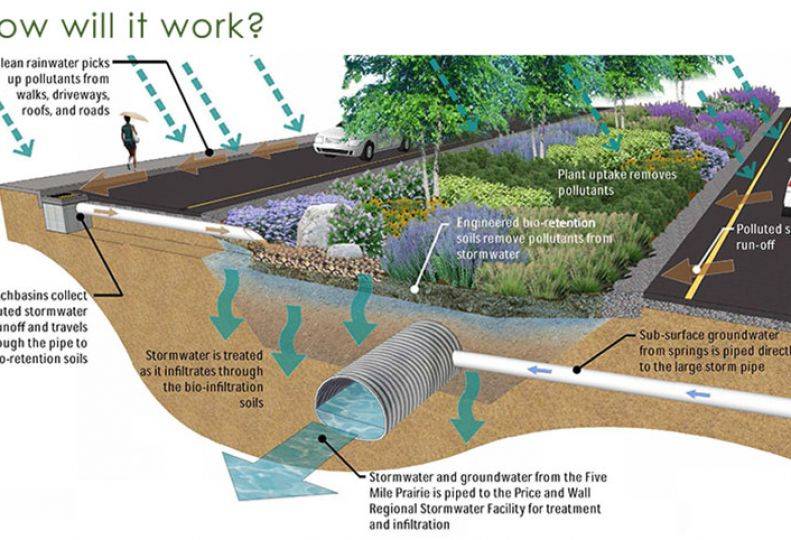 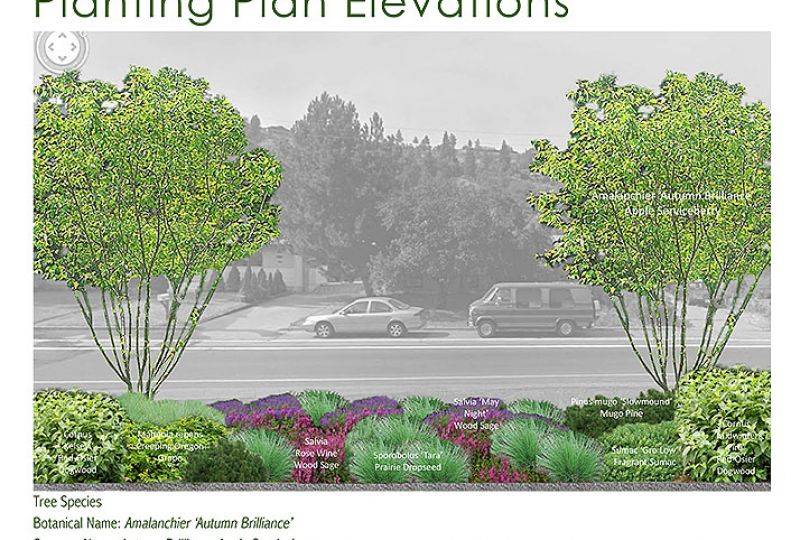 The Spokane County stormwater utility department is in the design stages of an estimated $2.5 million restoration project that will remove a longtime asphalt drainage channel that serves as a median separating the traffic lanes on Country Homes Boulevard, says Colleen Little, stormwater utility project manager.
The project cost estimate includes a 20 percent contingency cost, but the project is still about four months out from bid so the total amount might change, Little says. She says the county applied for and received two grants totaling $1.75 million for the project. The grants, which come from the Washington state Department of Ecology, are a 75/25 match, meaning that three-quarter of the cost is covered by the state, and the other quarter by Spokane County, making the total just over $2.3 million.
If the project ends up costing more than that, Little says, the county stormwater utility department has its own funds that it collects from stormwater fees.
“We already have funds set aside for this; those are the funds we’ll also use to do our matching,” she says.
AHBL Inc., a Tacoma-based landscape architecture, engineering, and land-surveying firm, is designing the project, says Spokane-based AHBL project manager Craig Andersen.
The project will replace one mile of the median ditch along the busy boulevard between Excell Drive and Wall Street with a large pipe that will be covered with soil and native plants to absorb surface water, Andersen says. The soil and plants will be level with the road, and will include tree species such as elm and birch, and plants like wood sage, blue oat grass, and lilac.
“For a number of water-quality reasons, we’re replacing that asphalt v-ditch with a pipe that will be covered with bio-retention soils and plants for road runoff,” he says. “The overall goal is to improve water quality in the Little Spokane River.”
The project will improve water quality in two ways, Andersen says. First, soil and plants will act as a natural filtration system for rain and road runoff. Secondly, the water that drains into the pipe from nearby Five Mile Prairie will be transported to a stormwater-treatment facility which is located on the corner of Price Avenue and Wall Street about four blocks north of Country Homes Boulevard.
Currently, Little says, the water that flows into the channel on Country Homes picks up pollution from the neighborhood and the road itself.
“The water right now from all the neighboring side streets, residences, and the street itself, flows untreated into the channel,” she says. “So when it rains, that water is picking up fertilizer, oils, metals, and other pollutants that harm our stormwater.”
Little says that as it is now, all the water in the channel flows to the Price and Wall treatment facility. However, she says, that facility isn’t large enough to handle the volume of pollution that arrives with the stormwater. Little says the Price and Wall facility, which was completed in 2009, was built with the understanding that someday the Country Homes channel would need to be modified.
With the new system, Little says, the rain and runoff will go into the soil filtration system. The first 18 inches of soil above the pipe will have qualities in it to remove pollutants, she said.
“All Country Homes Boulevard is in a flood plain,” she says. “So originally that channel was designed to carry away the flood water. The pipe will start at about Excell Drive, and any groundwater or treated stormwater that reaches it from Five Mile will enter the pipe there and it will behave exactly as it does now and will end up at Price and Wall.”
However, in the event of what’s known as a water quality storm, where the soil can’t filter water as fast as it’s coming in, there are overflow mechanisms to take the water into the pipe itself. A water quality storm in this area, Little says, is equal to a half inch of runoff on the surface of the ground.
Andersen says the project is still in the design phase and should go out for bid early next year. He says he believes the target completion date is late 2014.