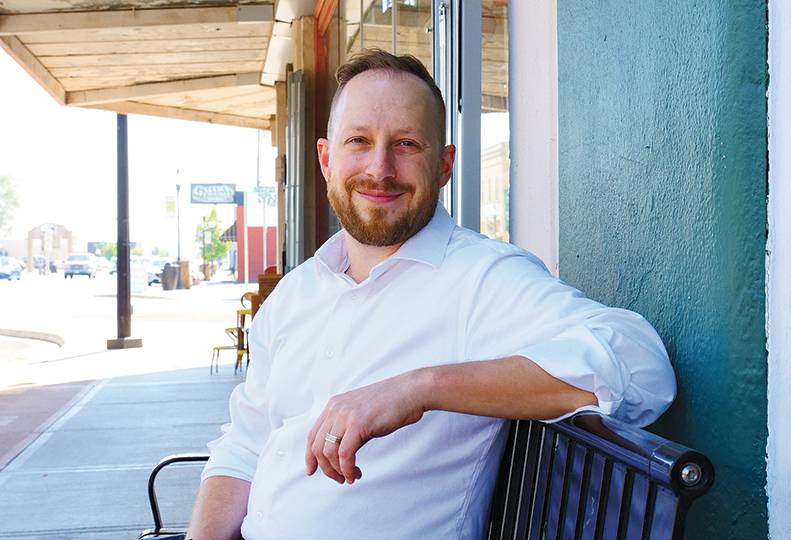 Spokane’s Northeast Public Development Authority has a new executive director, Jesse Bank, who says he plans to address some of the biggest problems facing the area, though he faces skepticism from the community.

“The east side of the (future North Spokane Corridor) has a tremendous number of challenges, with respect to infrastructure,” says Bank, who started in his new position on Aug. 1. “It’s got the highest concentration of unpaved roads in the city.”

Bank says the NEPDA faces a challenge in gaining the community’s trust.

“One of the biggest things that I’ve bumped into in my four weeks on the job thus far is a healthy dose of skepticism over whether anything’s going to happen up there,” Bank says. “I’m here to dispel that as vocally as possible. Things are happening, and they’re going to continue to happen. It’s too cool and interesting an area for them not to happen.”

His enthusiasm supports the NEPDA’s stated mission: “To facilitate the redevelopment, development, and construction of public benefit projects, resulting in increased economic activity and job growth within the PDA boundary.”

Bank says he understands why some people could feel skeptical about improvements to the area.

“It’s been disinvested and has suffered from decades of environmental injustice,” he says. “It’s been through some rough times.”

More recently, the Journal reported in January 2021 that construction of a 140-unit Beacon Hill residential development and a commerce park worth a combined $24 million had been delayed due to issues related to the COVID-19 pandemic and the cost of infrastructure.

Bank declines to comment on the current state of the two projects. An update on the Esmeralda Commerce Park is scheduled for the NEPDA’s online board meeting on Friday, September 9.

As previously reported by the Journal, if constructed as expected, the first phases of both projects would create tax revenues of about $750,000 for the NEPDA in coming years, according to public records.

The NEPDA is funded through increases in property tax revenue as land is developed. Those funds are used to construct infrastructure and to market property within the district for development.

“It’s a great system - when the neighborhood does better, the PDA does better,” Bank says.

Bank says he’s in the beginning stages of developing a budget for 2023, and he declines to disclose any of his predecessor’s figures.

“I’m going to work hard on doing some street design stuff on the east side of the tracks,” Bank says. “A lot of grants prioritize ‘shovel-ready’ projects, so if you don’t have the design work done, you get bumped down a priority level on some of those grant applications.”

“A lot of the infrastructure stuff makes it more appealing for private development to come in,” Bank says. “There has to be a certain level of function there to be able to have something to sell to those businesses.”

Environmental contamination is also a major concern within much of the NEPDA, Bank says.

“There’s a lot of both real and perceived environmental contamination,” he says.

Hillyard grew in the late 1800s and early 1900s as a separate town from Spokane and was named for the former head of the Great Northern Railway Co., according to Spokane historian Jim Kershner.

Trains were manufactured and repaired by workers who also lived in the Hillyard area, leading to both environmental contamination from the work and a rough reputation for the neighborhood’s residents that persists to present day. Hillyard was annexed by Spokane in 1924.

The U.S. Environmental Protection Agency and the Washington state Department of Ecology both have selected the NEPDA for grant funding related to surveying the extent of contamination from substances such as petroleum.

“These grants, unfortunately, don’t fund the cleanup itself, but there are other tools available—revolving loan funds and other grant organizations that can provide actual cleanup funding,” Bank says. “But that’s going to be contingent on property owners being willing to participate in that process.”

Bank says he plans to talk with property owners to help them understand why participating in the environmental contamination survey is in their best interest. Some, he says, may be under the impression that what they don’t know can’t hurt them when they decide to sell their property.

“(Prospective buyers) are either going to come in with a ton of contingencies and out clauses in their contract, or they’re going to discount their purchase price by a ton to cover for that risk,” Bank says.

As is the case with other Spokane neighborhoods, adequate housing supply is a concern for the area, Bank says.

“I can’t tip my hand too much on some of our plans up there, but trying to accommodate some new residential construction up there is a major focus,” Bank says. “There are some opportunities to get some housing construction done, to get some mixed-use buildings constructed. If we can spur that, it sends a signal to the market that it’s okay to invest here.”

Bank arrived in Spokane two years ago after several years in Denver, where he’d worked for real estate development and property management company Urban Villages. He and his wife, who met in Eugene, decided to return to the Pacific Northwest and eventually settled on moving to Spokane.

“We just fell in love with Spokane,” Bank says. “There’s such an exciting sense of it just tipping, like it’s just happening right now. In my line of work, you don’t get that opportunity, you don’t see cities in that stage very often.”

“It’s an interest of mine, and a great way to give back to the community and to stay plugged in to a lot of what’s going on,” Bank says.

He befriended city of Spokane planning director Spencer Gardner, as well as Steve MacDonald, the city’s director of community and economic development. Both encouraged him to apply for the position of executive director for the NEPDA, which had been open since December 2021.

“I was familiar with downtown Hillyard proper, which is right up my alley,” Bank says. “It seemed like a cool project, and I was looking for a cool project, for something to really sink my teeth into.”