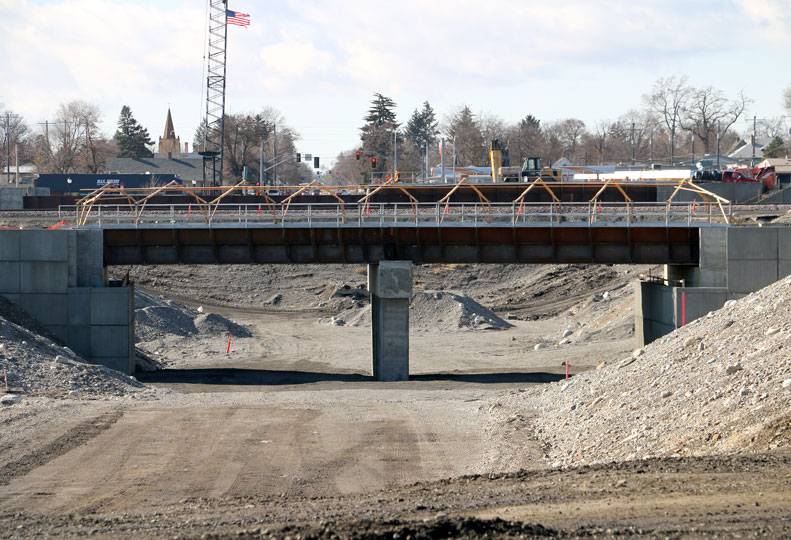 -Kevin Blocker
Halme Construction is well underway on a $77.5 million portion of the North Spokane Corridor project, in East Spokane.

The long-awaited North Spokane Corridor project will reach an important milestone with the completion of a railway realignment this summer.

In 2019, Spokane-based Halme Construction Inc. began work on the $77.5-million realignment project of a BNSF Railway Co. line in the Hillyard area known to have oil contaminants below the surface.

Known as the Black Tank Property, the site at 3202 E. Wellesley once was occupied by a large above-ground tank that stored petroleum products for fueling trains.

Scheduled for completion in 2029, the $1.49-billion corridor ultimately will create a 10.5-mile freeway linking Interstate 90 in east Spokane to U.S. 395 north of Spokane.

In 2015, the Legislature passed its Connecting Washington package, which provided full funding to construct the NSC over multiple years.

“Right now, we’re waiting for winter to be (over) to get going back to full construction activity,” Hilmes says.

A major redesign of Wellesley Avenue between Market Street and Freya Avenue began last year and is expected to be completed in late 2022 or 2023, he says.

The Northeast Public Development Authority recently told the Journal it plans to submit a grant application to the U.S. Economic Development Administration to assist in the funding of the reconstruction of Wellesley.

The Wellesley project will serve as the first phase of a planned buildout of a network that will allow the development authority to market shovel-ready sites to specific industries and attract new businesses to the area.

The NSC’s next major stretch of work also will start this spring involving the construction of a nearly straight run of the corridor south of Wellesley to the Spokane River. That work is expected to be completed in another couple of years, he says.

By October, Hilmes says bids are expected to go out on the bridge and crossing work that will take the corridor over the river to continue the southward march to Interstate 90.