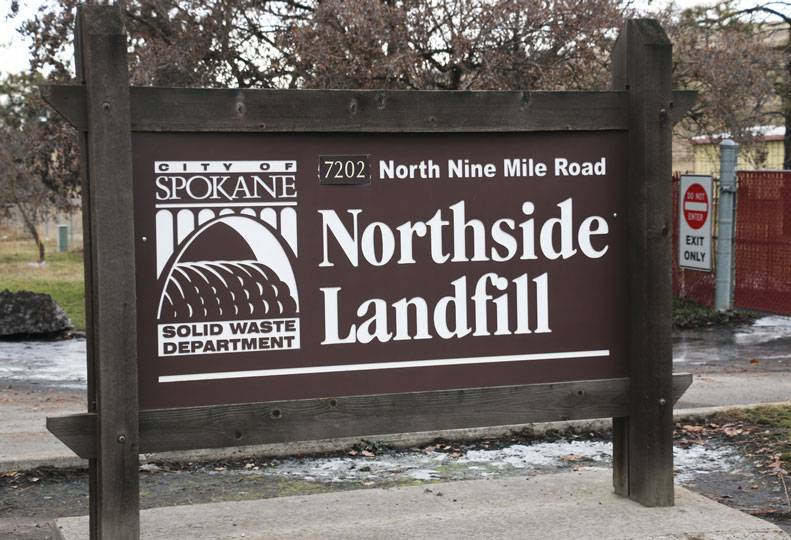 -Kevin Blocker
While the Northside Landfill has been closed to the public for years, the city of Spokane uses the site for some public works operations now.

The old 345-acre Northside Landfill, once the site of the largest garbage disposal operation in Spokane County, reached a milestone late last year as it was declassified as a U.S. Environmental Protection Agency’s Superfund Site and removed from the agency’s National Priorities List.

The Northside Landfill, located at 7202 N. Nine Mile Road and situated in the northwestern-most pocket of the city of Spokane, still is considered an active landfill but is closed to the general public.

Bill Fees, the landfill’s Spokane-based site manager with the Washington State Department of Ecology, says, “Being removed from the list means the cleanup remedy has gone according to plan.”

A once active-dump site developed  90 years ago, by the early 1980s, city officials discovered toxins from the landfill were slowly beginning to leak into the groundwater. The landfill was immediately closed to the public for dumping.

The EPA ordered the city to clean the site at an estimated cost of between $41.5 million to $51.5 million. City spokeswoman Marlene Feist says final cleanup costs were unavailable at press time for the Journal.

Despite the delisting, there are no plans for commercial or residential development on that site, says Marlene Feist, the city’s Public Works director of strategic development. Last year, however, city crews began using a portion of the landfill to store salt and sand during snowstorms for the first time, Feist says.

“It helps to serve in a variety of public works uses,” she says.

Residential and undeveloped land lies next to the former dump site. Spokane Valley-Rathdrum Prairie Aquifer lies beneath roughly the western third of the landfill, according to data provided by Kelle Vigeland, an environmental manager for the city of Spokane’s Solid Waste Disposal department.

Fees says solid waste disposal employees, Department of Ecology representatives, and EPA representatives will continue to hold a review every five years to ensure the site is meeting the terms of its prescribed cleanup.

The National Priorities List is comprised of hazardous waste sites across the country that EPA has designated for priority cleanup. Sites are removed from the list when cleanup goals are met. The Northside Landfill was added to the priorities list in 1986.

While the site no longer is on the Superfund list, conditions will continue to be monitored there.

The city  still treats and disposes of small amounts of overflow waste from the city’s Waste To Energy plant on the west edge of town, at 2900 S. Geiger Blvd.

Vigeland says the few structures remaining near the landfill’s opening gate include a gatehouse, a truck weighing station, and two equipment storage areas.

An environmental technician is charged with making sure that the landfill gas collection systems are operating properly on a daily basis, she says.

The city continues to operate three open pits – known as cells – on the land. The cells have a hard-base liner that intended to prevent waste from leaking below the landfill, she says.

The waste is compacted and covered to avoid creating other environmental impacts. The active cells currently sit on a total of 10 acres of land. Vigeland says the original landfill was 160 acres, which is all under cover now.

The site became the city’s primary refuse dump in 1931. During the 1930s and 1940s, the northeast portion of the site was an open dump where refuse was burned, says Viegeland, citing city of Spokane historical documents.

A refuse incinerator was constructed in the 1940s, but open burning continued at the site until the 1950s, Vigeland says.

For several years, the ash from the municipal incinerator – as well as bottles, cans, and other debris – were the major components of the waste deposit at the site. Refuse that didn’t burn was left uncovered, she says.

Then, between 1962 and 1973, landfilling practices were conducted in the central area of the site. Landfilling involves placing wastes on an existing grade and covering them with soils scraped or dug from nearby areas, she says.

Following that period, the “trench method” of landfilling began in 1973 adjacent to Nine Mile Road. That process involved digging deep trenches, as much as 20-feet below ground, filling them with waste and then burying it with dirt excavated from the trenches, she says.

By 1982, city officials had discovered tetrachloroethylene, a solvent also known as perchloroethylene, or PCE , in the groundwater at the landfill. The following year, PCE, which potentially can harm the nervous system, liver, kidneys, and reproductive system, was found in residential wells near the landfill, according to EPA documents.

As was common for that time, the landfill wasn’t lined, which allowed groundwater to move through the waste, absorb PCE, and transport it downstream, EPA says.

In 1989, the EPA issued a cleanup plan requiring three unlined cells to be closed and capped, groundwater to be extracted, treated, and monitored. Also, landfill gases had to be managed, and drinking water was provided to residents affected by the contamination, according to EPA.

Last year, data showed PCE in groundwater had been reduced to within federal and state drinking water standards and that all cleanup goals have been achieved.