Construction set to start in April 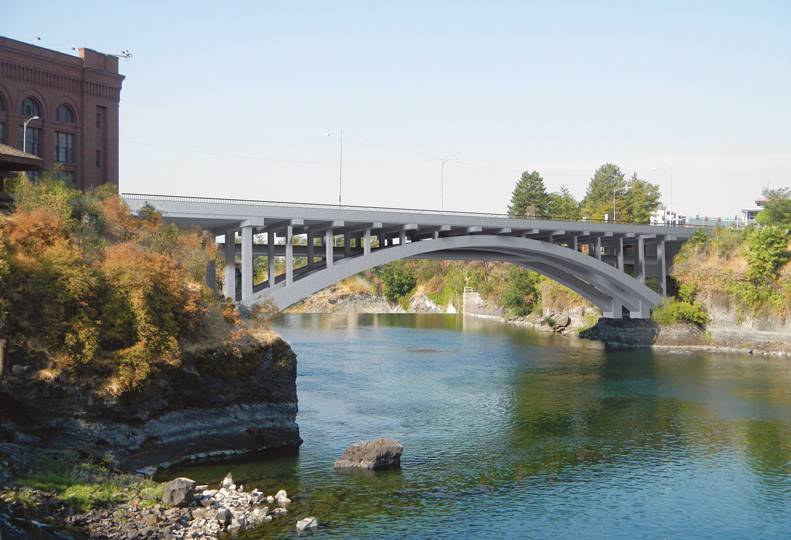 -City of Spokane
This photo illustration shows what the revamped Post Street Bridge is expected to look like and how it will maintain its historic look. —City of Spokane

After 103 years, the Post Street Bridge in downtown Spokane will be replaced. Construction is scheduled to start in April.

Marlene Feist, director of strategic development for the public works department, says plans call for the project to be completed at the end of 2021.

The bridge replacement is expected to cost $21 million. Once finished, it will be available to northbound motorists and pedestrians and cyclists. At press time, the city had extended the deadline for general contracting bids to mid-March, Feist says.

Seattle-based KPFF Consulting Engineers, which has an office in downtown Spokane, designed the replacement bridge.

City officials closed the bridge to motorists in May 2019 after a study revealed it wasn’t structurally secure enough to handle the amount of vehicle traffic it was accommodating, Feist says.

Though closed to cars, the bridge quickly became a popular route for pedestrians in and out the downtown core to places such as City Hall, River Park Square, and Riverfront Park, Feist says.

“Summit Boulevard will be closed at Post,” Feist says. “So, there will be alternate routes that people will have to utilize if they frequently use the bridge.”

Feist says city officials are concerned about the potential financial impacts on a pair of nearby businesses – Anthony’s at Spokane Falls, at 510 N. Lincoln, and the Mobius Science Center, at 331 N. Post.

“We will continue to let the public know they will both remain open through the construction and display proper signage to help the business as much as possible,” she says. “City Hall may be more of a challenge to get to as well.”

The bridge will close in April for work to be done on an unrelated water main project. Then, following Bloomsday weekend in May, demolition of the bridge’s upper portion will begin, she says.

City officials ultimately determined the Post Street Bridge will maintain its characteristic look and feel from a century ago.

Designers and public works officials looked at many different options during the design phase, one of which included the use of steel trusses, she says.

Though there were less expensive options considered, Feist says the existing concrete base – which will remain in place – provided a greater level of strength and support.

“There was also strong community support to see the bridge retain its historic look,” she says.