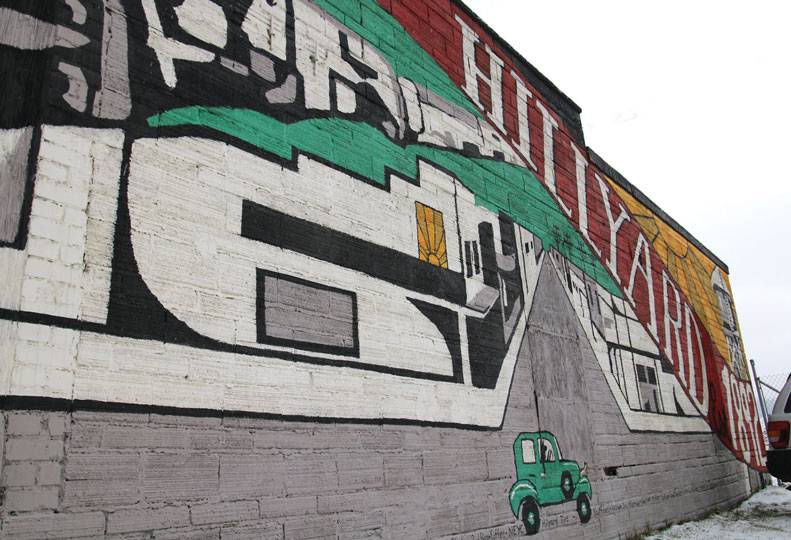 -Natasha Nellis
Spokane’s historic Hillyard neighborhood is within the Northeast Public Development Authority’s boundaries and is the inspiration for The Yard moniker.

Development of two massive projects in northeastern Spokane—the Beacon Hill residential development and the Esmeralda Commerce Park—might not start as expected this year.

Those delays in construction—more specifically, the increase in property values that the construction would generate—have placed the Northeast Public Development Authority in a compromised financial position.

Northeast PDA executive director David Guthrie says the organization has secured funds to remain viable for the remainder of this year, but he’s hopeful those projects will break ground in 2022 in order to get tax dollars flowing into the organization.

The PDA is funded through increases in property-tax revenue as land is developed, and it uses those funds to construct infrastructure and market property within its district to companies for development, with the goal of fostering economic and job growth.

If built as expected, it’s estimated that the first phases of both the Esmeralda Commerce Park and Beacon Hill residential development would result in tax revenues of $750,000 for the PDA over the coming years, according to public records.

“Those dollars that we were anticipating receiving in 2021 and 2022 have been pushed back to ‘22 or ‘23,” says David Guthrie, executive director of the development authority.

The Northeast PDA’s district, which is dubbed The Yard, covers 1,000 acres bounded by Nevada Street to the west, the Esmeralda Golf Course to the east, Magnesium Road to the north, and Garland Avenue to the south.

Construction of the $14 million first phase of the 2,000-unit Beacon Hill Development had been scheduled to begin this spring, but the pandemic and infrastructure construction delays have potentially stalled the project.

Plans for the first phase included a 140-unit, three-building Beacon Apartment complex to be developed by Ryan Buth, a Spokane-based developer, in conjunction with Pete Rayner, the longtime developer and owner of the Beacon Hill project.

Rayner owns the balance of the 200-acre Beacon Hill development with business partner Dave Baker through Beacon Hill Spokane. He has been working on building the infrastructure to develop the property for over a decade and still is involved in the development.

“It’s just a very complicated project. And very expensive getting the infrastructure into the ground for a project of this size,” says Guthrie.

The sale of over 80 acres to Buth could result in faster development of the property, Guthrie says. Currently, a hurdle for the development is the installation of large water storage tanks capable of accommodating 2,000 housing units, he says.

Rayner says he is working on a solution for getting water to the development with the city of Spokane, and he’s “cautiously optimistic” he’ll be able to determine the next steps for the development by the second week in February.

Just west of the planned Beacon Hill development, Spokane development company L.B. Stone Properties Group has delayed work on the Esmeralda Commerce Park for a year, primarily due to the pandemic, contends Guthrie.

“That’s not ideal, but we’re still confident that L.B. Stone will build a great project there,” he says.

Construction value of the first phase of the Esmeralda Commerce Park was estimated at $10 million, adds Guthrie. In total, the planned commerce park is expected to have five buildings totaling 500,000 square feet.

Moving forward, one goal for this year is to break ground on the reconstruction of Wellesley Avenue from the North Spokane Corridor connection up to Beacon Hill. The Northeast PDA is in the process of securing funding for the project.

In 2017, the City Council adopted a Joint Mayor/City Council Strategic Plan, which included an investment plan to support the three public development authorities totaling $5.4 million, $2 million of which went to the Northwest PDA.

Through developer agreements, $650,000 of PDA funding went toward infrastructure improvements at Beacon Hill, while $1.25 million has been allotted for infrastructure at the Esmeralda Commerce Park. The remaining $100,000 is the uncommitted funds that have been reallocated to be distributed directly to Northeast PDA to continue its work this year.

Without those funds, it was estimated that the Northeast PDA would have run out of funding by May, according to Northeast PDA board meeting records.

The Wellesley Avenue project will serve as the first phase of a planned buildout of a grid network of that will allow the development authority to market shovel-ready sites to targeted industries and attract new businesses to the area. Ideally, the backbone of that project would be completed by 2023, to coincide with the expected completion of the current NSC phase roads, says Guthrie.

“On East Wellesley, from Freya to Havana, you’d be hard-pressed to find a worse looking arterial in Spokane,” says Guthrie. “It’s in very poor condition.”

In total, the Wellesley Avenue portion of the project is budgeted at $3.3 million.

The PDA is also in the process of submitting a grant application to the U.S. Economic Development Administration to help fund the reconstruction of Wellesley, adds Guthrie.

The Northeast PDA was founded through an interlocal agreement between the city of Spokane and Spokane County.