Some say numbers would be worse if more businesses reported vandalism, break-ins 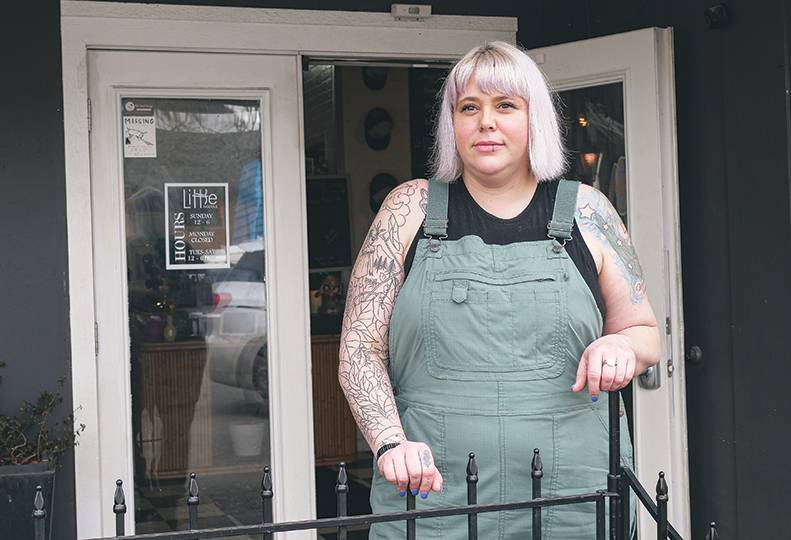 -Virginia Thomas
Little Noodle owner Kadra Deuber says crime problems in the city’s core are spreading to other neighborhoods, including the Garland District. 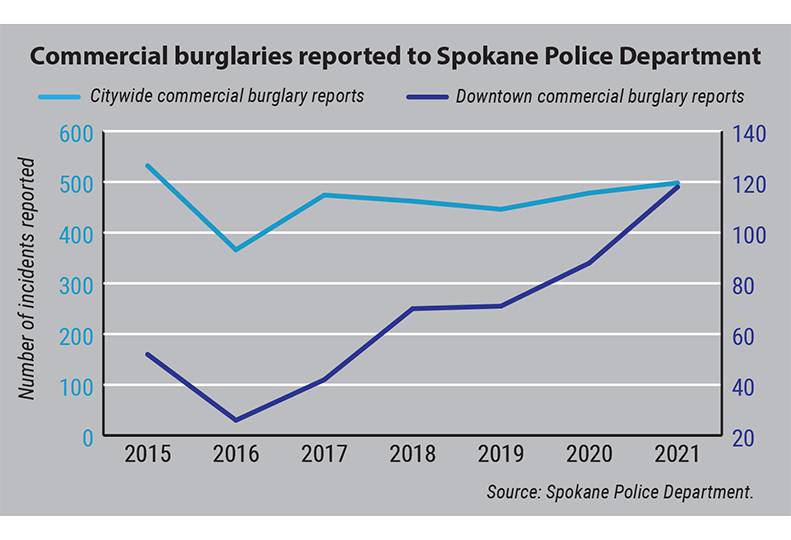 According to data from the Spokane Police Department’s crime report statistics, commercial burglary reports increased nearly 127% in the downtown precinct since 2015, to a total of 118 incidents reported in 2021.

Citywide, commercial burglary reports have decreased by about 6% in the same period.

The weekly report includes data on some reported property crimes, such as burglary, arson, and larceny. Other crimes, such as violent acts and vandalism, however, aren’t included in the report.

Chris Batten is chairman of the Downtown Spokane Partnership, which oversees downtown’s Business Improvement District, among other activities. Batten also is a principal at RenCorp Realty LLC, a property management company based downtown.

Batten says he and others downtown have noted an increase in some types of property crime, such as graffiti and broken storefronts.

“Fewer and fewer of them get reported,” Batten says. “The level of frustration is to a point where people don’t think it’s going to do them any good to report it. What can they do? They can make a report, and hopefully it’ll get added to a statistic—because that’s probably about as much as is going to happen.”

Gordon Hester, president and CEO of commercial real estate company Kiemle Hagood, which is based downtown, says an act of vandalism occurs at one of Kiemle Hagood’s 300-plus Spokane and Coeur d’Alene properties nearly weekly.

“People are going into the common bathrooms in our buildings and pull- ing sinks off walls, breaking mirrors, things like that,” Hester says.

In response to the increase in commercial property crimes in downtown Spokane, he says Kiemle Hagood has locked all common bathrooms in its buildings and has increased its downtown security guard team.

“We’ve hired two more guards in the downtown area,” Hester says. “That adds to the two or three (guards) we already had there. There are about eight big buildings we manage downtown, and the guards work between the different buildings.”

“I hear it’s just making its way north,” Deuber says. “People are coming up from downtown.”

Little Noodle was burglarized in the early morning hours of March 8. A rock was thrown through the glass of the restaurant’s front door, and a till, a safe, and a book of checks were stolen, while other items, including an iPad, were damaged beyond repair. Between cash stolen and property damaged, Little Noodle’s loss is estimated at $4,100.

Deuber says she reviewed security camera footage of the incident.

Deuber alleges she knows who the perpetrator is.

“We got camera footage. We know who did it,” Deuber says.

Deuber says she’s turned over identifying information to law enforcement, but officers haven’t found the opportunity to arrest the person.

In the meantime, Deuber says she’s working to make the neighborhood safer.

“I can’t have just one person here, for safety issues,” Deuber says. “We’re almost fully staffed for a slower time of the year, and that’s really rough. I have to have at least two people on, three for the night crew.”

About half of respondents said that their response to increased security concerns included reducing building access, while 39% increased exterior lighting or installed new or additional security cameras, and 28% reported hiring additional private security.

Of the respondents, four out of five said that they experienced at least one crime per month. However, only a third said they report crimes at least 50% of the time, and 19% said they almost never report crimes to law enforcement.

“The system itself doesn’t seem to be working,” Batten says. “It’s not one piece. It’s just that the pieces aren’t working well together.”

Drawing people back to downtown offices and events is a key piece of decreasing crime, Batten asserts.

“We’re expecting that people will come downtown, that we’re turning the corner,” he says. “We just haven’t quite gotten there yet, and until we do, we have a vacuum.”

Batten and Rolwes, as well as a representative of Kiemle Hagood, were among 30 who attended a March 18 meeting led by Spokane County Sheriff Ozzie Knezovich, the purpose of which was to examine the causes of and potential solutions to crime in the county.

The meeting included local commercial and private property developers, owners, and managers, DSP board members, and community members. Additional meetings are to take place each Friday at the Spokane County Human Resources Learning Center, on the courthouse campus north of the Spokane River.

“We need everybody in the same room,” Batten says.