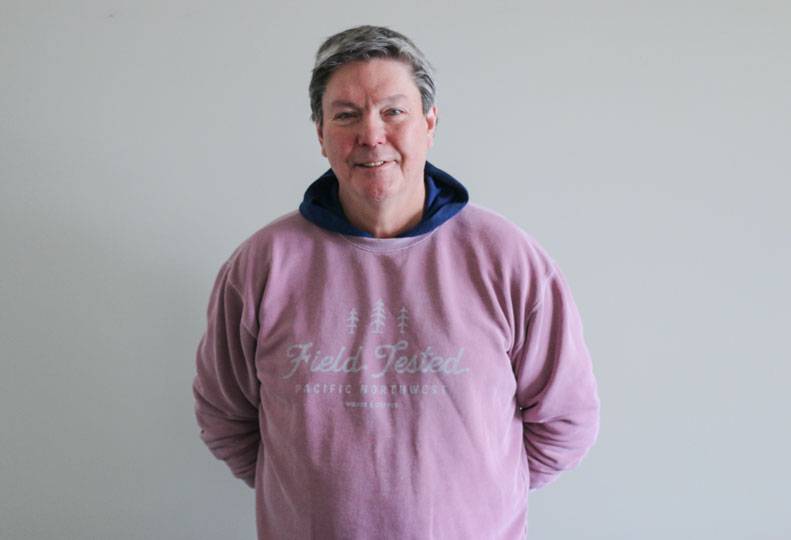 When he attended Pennsylvania State University in the 1980s, Wright wrote his doctoral dissertation on why some tribes develop successful economies, and others don’t. In the late ‘80s, he started his career as general manager of the tribe to which he belongs, the Sitka Tribe of Alaska. Before landing the current position with the Spokane Tribe, Wright, now 65 years old, worked for at least five other tribes and two universities.

The Journal sat down with Wright to discuss his ideas for the economic development of the Spokane Tribe, his role in development, and the challenges the tribe currently faces.

How will your past work with other tribes inform what you’re doing with the Spokane Tribe?

When I’m applying for jobs, I always think … they probably look at my resume and think, man, that guy’s been around. And if I were them, I would look at my resume and think, that guy has a lot of experience. I know people who only work for one tribe or one government or one organization, and they don’t know any other way of doing what they do. They haven’t seen any other examples of how things are done. I’ve seen a lot of different ways of doing this kind of work, of organizing governments and departments and thinking through what makes sense. I bring all that to the table.

The Spokane Tribe gets proposals for development projects all the time. I can tell right away when we just don’t have the bandwidth.

What do you see as your role within the tribe? What do you hope to do in the time that you’re here?

The government needs to be reorganized. Most tribal governments, whether they have casinos or not, have evolved over the last 20 years in a high-growth mode. Sometimes departments … and even assignments of department heads and other program managers happen for either financial reasons, political reasons, or just logistical reasons. The Spokane Tribe is a good example. It’s (based) a 40- or 50-minute drive away (from the city of Spokane), sometimes 1 1/2 hours in the winter. You aren’t going to get everyone to come to work for an organization where you have to commute an hour or more every day. You have to grow your talent.

As departments and the tribe as a whole evolve, sometimes they haven’t grown in a very rational manner. That doesn’t just apply to tribes. It sometimes applies to businesses or municipal governments. Then somebody like me comes in with an outside view of it, a very objective look at how things function. Then you start rearranging things through a planning process that leads to higher levels of efficiency, more effective service, better communication, more cooperation, all those buzzwords. But that’s what organizations do -- they communicate, and they serve. If they’re not organized well, they can’t do that very well.

As the Journal previously reported, the Spokane Tribe announced plans in December to expand its Airway Heights casino. What’s this going to do for the tribe?

The tribe has a really good plan to address what I call low-hanging fruit, the areas of opportunity that make the most sense, given the tribe’s ability to leverage its current assets and not overleverage or get too far into debt.

I think the tribe has a good niche in this area, compared to some of the other large tribal casinos and entertainment options. The Spokane Tribe Casino may not be as fancy as some, but I think it attracts the kind of working-class people who just want to have a little fun gambling, and they don’t necessarily need a fancy hotel or a pool or anything else.

With casinos, you want to keep gamblers in those seats, and you want them to bring their families. So, you want a hotel. You want a bowling alley or other arcade-type options and restaurants. You want things to keep people in that area and entertained. It can’t just be gaming. If you look around the country at every tribal government that has a casino, that’s what they’re doing.

Are there ideas or plans for other aspects of the tribe’s economic development that you can talk about?

The tribe has more than a dozen enterprises operated through the Spokane Tribal Enterprises. We’ve got a beautiful lake (Roosevelt), a bunch of land on the reservation, and outdoor opportunities. We want to maximize that. I think an RV park by the casino, for example, is a natural fit.

I think cultural tourism would be a growth opportunity, in addition to more outdoor recreation of different kinds, spring through fall, and also winter options. One thing I love to do, and I think this is something we can grow, is winter cabin rentals--just going off to a cabin with a fireplace and maybe some cross-country skis. There’s lots of people who love to do that.

You’re going after certain types of visitors who want different kinds of things, and you want to have a diverse menu of options for those folks. You’ve got to diversify the portfolio of entertainment options.

Of course, there are stores and retail opportunities. It’s exciting, because this tribe is on a fast growth path for economic development, which is what you almost always see with a tribe that gets to the point where we have a casino that’s operating at almost capacity.

We need to grow it and keep it operating at a higher capacity. At a certain point, you reach saturation, where the market won’t support a lot more of a certain kind of activity, but then you develop something else.

What’s the biggest challenge, in terms of economic development, that the Spokane Tribe is currently facing?

I think it’s the ability to leverage and grow. When you’re a small tribe and you have a lot of competition in multiple markets, you have to be careful about overleveraging and pursuing projects that don’t have a high enough margin. Just because it seems attractive, just because someone brought it to the tribe and said ‘this is a natural for you, doesn’t mean it will be.

I think it’s access to capital, but in the context of how much debt the tribe can take on. That balancing act is the most important condition for additional development. But, to the tribe’s credit, as I came on board, I could tell that the leadership is pretty good at weighing those two things.