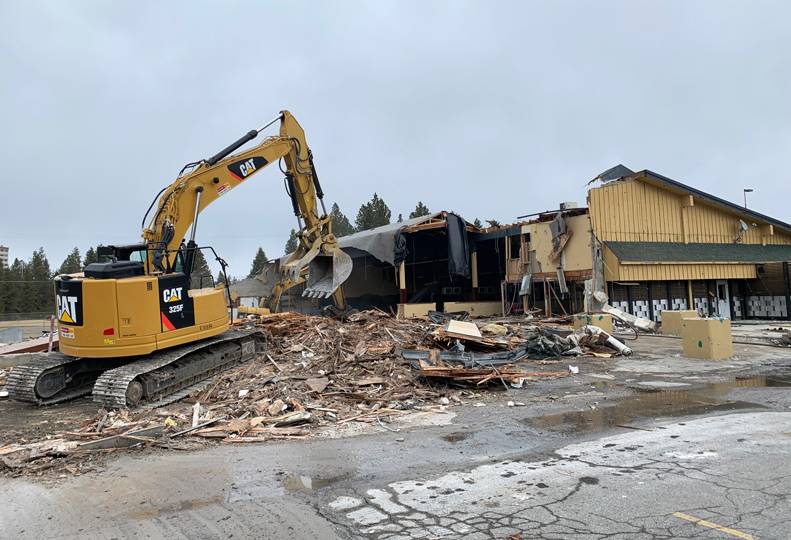 -Linn Parish
Crews with Rob's Demolition tear down the old Hugo's on the Hill entertainment venue, on Spokane's South Hill, earlier this month and before Washington Gov. Jay Inslee deemed most construction as nonessential.

Inslee’s mandate, issued late Monday in an effort to slow the spread of the COVID-19 outbreak, included a list of essential industries that would be allowed to remain open during the two-week mandate. That list included “construction workers who support the construction, operation, inspection, and maintenance of construction sites and construction projects (including housing construction) for all essential facilities, services and projects.”

The language of the statement led several in the industry to request clarification from the Governor’s office, to which Inslee issued a clarification last night deeming nonessential all commercial and residential activities that don’t actively support an essential industry.

“For the last three days, we’ve been trying to figure out what exactly is essential and asking him to clarify,” says Suzanne Schmidt, president and CEO of Associated Builders and Contractors IPC. “So, he obviously did that. Maybe it was a question we shouldn’t have asked and just assumed everything was essential.”

Washington is one of only four states to have included residential and commercial construction as nonessential. Inslee’s order is closely modeled after California’s stay-home order. Michigan and Pennsylvania have also halted construction statewide, as have individual cities in Massachusetts, though no statewide halt has been enacted there.

Mike Silvey, owner of Silvey Construction Inc., says, “We’re disappointed that our jobs are shut down. On the other hand, we understand that this is what needs to happen to keep things under control with the virus.”

Silvey, however, did contend that the list of essential companies seemed arbitrary, noting coffee stands and cannabis shops are allowed to continue operations.

“How many people are those baristas coming in contact with every day?” he says. “It seems somewhat inconsistent and a little arbitrary on what they deemed essential services versus others.”

Idaho Gov. Brad Little issued a stay-home order on March 25 and included commercial and residential construction on the list of essential industries.

“Idaho is certainly consistent with what most of the country is doing,” says Cheryl Stewart, executive director of the Inland Northwest Associated General Contractors. “Oregon and Idaho both exempted all construction work. Washington is certainly taking it a step further. … That was a little surprising to us.”

Stewart adds that the mandate currently allows for local jurisdictions to determine what public work is considered essential.

“There’s a lot of confusion,” she says. “Who makes that call whether or not you’re essential? A big concern we have right now is with our suppliers and subcontractors,”

If a school district determines its project is essential, she adds, “then we’re assuming every subcontractor and supplier who has to work on that project is now essential. But are they only essential for that project? How do you even operate a business that way?”

The Washington state Department of Transportation announced on March 26 that it would be suspending “most state construction work” for at least two weeks. WSDOT will continue its work on fish passage culverts to meet deadlines imposed by a federal court injunction, according to a release from the department, as well as design work, but any field work related to the design process will be suspended.

The shutdown of residential construction, with the exception of projects involving public funding, such as low-income housing, has frustrated and confused some local homebuilders.

Joel White, executive officer of the Spokane Home Builders Association, says the biggest concern at this point is the customers who were expecting delivery of their new homes within the next two weeks, especially those who had already sold their previous homes and were expecting to move in, a concern echoed by George Paras, owner of Paras Homes.

Paras says most active job sites already were operating with one builder onsite, and the company had implemented the recommended safe practices advised by the Centers for Disease Control and Prevention.

Paras says he is currently working to close active job sites and is contacting subcontractors and customers.

He adds, “It’s too bad there’s a lack of common sense to this, but that’s what happens when you come up with a broad-stroke policy. … Everybody’s trying to figure out what to do, and we’re scrambling right now.”

He adds, “They’ve taken it out of the hands of the people who make good choices on a case-by-case basis of how to properly do things, and that’s unfortunate.”

White adds that the provision to allow for public low-income housing projects to continue is also a cause for confusion, noting that the work done on a public housing project is the same as a private.

“The biggest frustration is in the governor’s order, it exempted all government construction, so low-income housing, which is the same exact method of construction, was exempted, but our members aren’t able to build, so there’s a little bit of political play here too.”