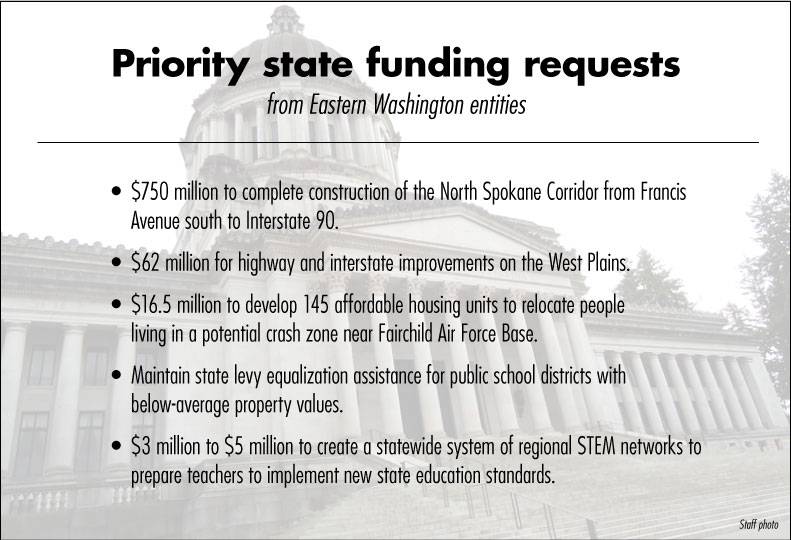 A roundup of regional priorities here for the 2014 session of the Washington Legislature focuses mostly on transportation and education projects and programs totaling more than $1 billion, although most of that would be for multiyear construction projects.

Spokane region priorities also include requests for changes in law or policy protections that could result in regional revenue and savings of hundreds of millions of dollars.

"This is for the second year of the biennium budget set in 2013 legislative session," notes Rich Hadley, president of Greater Spokane Incorporated, adding that the Legislature likely will look to make necessary changes without making wholesale additions to the budget.

Budget aside, one of the top priorities for the Legislature will be to look at a new transportation spending package.

"At the top or our list is the opportunity to get $750 million to allow us to finish the freeway from Francis Avenue to the interstate," Hadley says. "It's in the Senate budget. Hopefully it will be in the House budget as well."

Also high on the Spokane's agenda, the city is seeking a renewable energy designation for electricity generated at Spokane's waste-to-energy facility, Condon says.

Condon is optimistic that request will gain traction in the Legislature this year, because Spokane's single-stream recycling program should ensure that recyclables won't be diverted to the incinerator to make power, a concern among environmentalists.

"Now, with the positive impact of single-stream recycling, it lessens that worry," Condon says.

Such a designation would enable the city to sell renewable energy credits, potentially generating millions of dollars of revenue, he says.

The city of Spokane also wants to maintain the state's Public Works Assistance Fund as a means of obtaining low-interest loans by prohibiting the use of the funds for state general operating costs.

That fund, though, is one source of money that the Legislature has been eyeing to help pay costs associated with directives of the McCleary decision, in which the Washington state Supreme Court ruled last year that the state must meet adequate funding standards for basic education by 2018.

The Public Works Assistance Fund is important to the city as a source of low-interest loans for financing public infrastructure, which could save the city of Spokane more than $100 million over 20 years, Condon says.

GSI also is backing priorities of the Washington state Department of Transportation and local governments for a number of specific projects for the Legislature to include in the transportation bill, in addition to securing funds for the North Spokane Corridor.

In Spokane Valley and the Liberty Lake area, GSI supports a request for $89 million for design, right-of-way acquisition, and reconstruction of I-90 from Barker Road to Harvard Road, including the interchanges at Barker and at Harvard.

For public transportation, GSI supports a request by the Spokane Transit Authority for state funding of up to $11.7 million to match federal funding to construct and operate a modern electronic trolley through downtown and between the University District and Browne's Addition.

STA also is requesting $8 million over the next two biennia for design and construction of a transit center near the I-90 interchange at state Route 902 on the West Plains.

In the education sector, the Spokane Public Schools board is urging the Legislature to continue to implement directives of the McCleary decision, says Mark Anderson, the district's superintendent.

Anderson says the board's first funding priority is to continue to urge the Legislature to implement full funding of basic education as directed by the decision.

In an initial court-ordered step to comply with the McCleary decision, the Legislature provided funding to reduce class sizes in kindergarten and first grade. The school board is requesting that the Legislature also include money so districts that are out of space can buy portables or add classrooms onto schools, Anderson says.

"Some districts aren't able to lower class size because they have no room," he says. "By 2018, kindergarten to third grade are supposed to be reduced in class size to 17 kids per teacher. Currently they are up to 24 students per teacher."

"Capital projects are normal to be on a list of ours," Hadley says. "Even in supplemental years, the state often has a capital budget."

Among other education-related requests, Washington State University is requesting $3.6 million for maintenance and operational funding for WSU-Spokane facilities on the Riverpoint Campus here. WSU also is seeking $5.3 million in capital funds to design a new animal disease diagnostic and research facility, and $500,000 to support WSU as a joint leader in the Center of Excellence for Aviation Jet Fuel.

Eastern Washington University is requesting $4.5 million in capital funds for the design stage of a new science building and $350,000 in predesign funds to develop a Center for Academic Engagement facility for professional health sciences and student services on the Riverpoint Campus.

Community Colleges of Spokane is requesting $3 million for a one-time funding request to expand science, technology, education, and math (STEM) programs. CCS also is seeking $900,000 to fund a 2 percent pay increase for faculty and staff, $350,000 to implement college alignment with K-12 curriculum standards, and $500,000 to expand, accelerate, and advance aerospace manufacturing and training.

The Spokane STEM Network, a nonprofit based at GSI, is seeking $3 million to $5 million to support the creation of a statewide system of regional STEM networks to prepare teachers to implement new state standards and provide real-world STEM learning experiences to students.

GSI is joining with nonprofits Catholic Charities of Spokane, Community Frameworks, and Habitat for Humanity in a request for $16.5 million for the Washington state Department of Commerce to develop 145 affordable housing units for people currently living in manufactured homes located within a potential crash zone near Fairchild Air Force Base.

"We're going to start putting a stakeholder group together that's going to be involved in building affordable housing, and we're going to be working with legislators to figure out a way to receive funds from Commerce to help," says Sandra Jarrard, GSI's director of public policy.

"I do think there will be a push toward reducing regulatory requirements," Hadley says. "A majority coalition in the Senate is asking for reform, and many of those are regulatory changes."