Rapid transit project is scheduled to be completed in May 2022 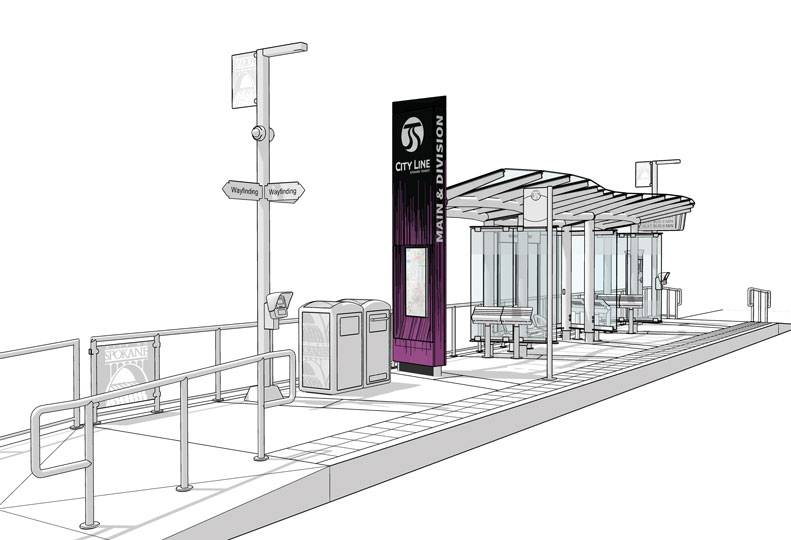 -Spokane Transit Authority
Amenities, including signage, shelters, and railings, will be installed at the 28 City Line stops starting late in this year.

Work on the Spokane Transit Authority’s $92.2 million City Line rapid-transit bus line route is well underway, and the new-to-Spokane transit option is scheduled to be up and running by May 2022.

Karl Otterstrom, STA’s director of planning and development, says the platforms have been installed at 12 of the 28 stops along the six-mile route, and work on other stops will start soon. All of that infrastructure work along the line is scheduled to be complete by mid-November.

The rapid-transit line will extend from the Browne’s Addition neighborhood eastward through downtown Spokane, snake northeast through the University District, and extend to its easternmost point at Spokane Community College, in east Spokane. In a broad sense, work on the platforms is moving west to east, with several exceptions to accommodate construction when sites become available.

Cameron-Reilly LLC, of Spokane, is building most of the platforms and stops along City Line through a $12.8 million contract.

STA expects to begin the bidding process soon for three more aspects of the project: three Riverside Avenue stations, a Wall Street station, and station amenities, which include shelters, lighting, and other features. Those three projects have a combined estimated cost of $5.5 million.

Work on the amenities is expected to start after the platforms are completed.

Total cost for 10 electric buses that will operate on the route is expected to be $15 million, including $12.6 million for the vehicles and $2.4 million for parts, equipment, and training. That’s down from an initial estimate of about $19 million for the buses.

Otterstrom says each aspect of the project has come in under budget to date. As of early March, the total City Line project was $17.3 million lower than initially projected, though he cautions that number could change in either direction as more contracts are finalized. If that number holds true, the total cost of the project would be closer to $74.9 million.