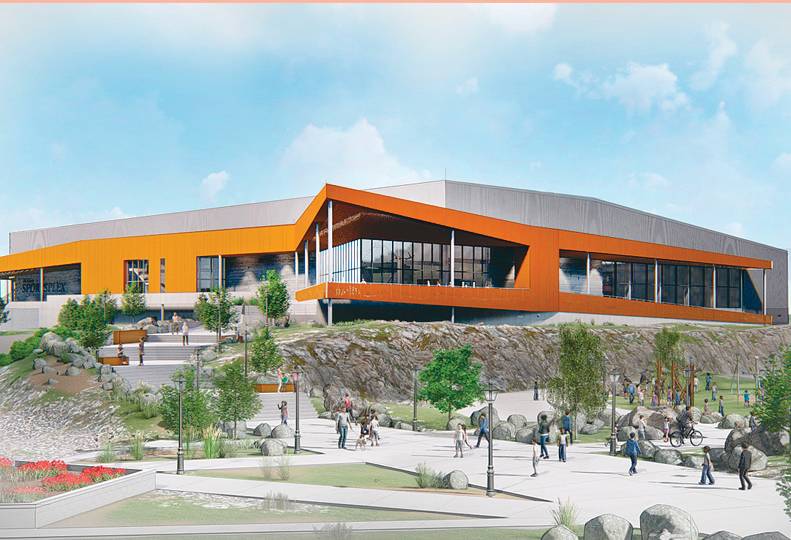 -Integrus Architecture PS
The 135,000-square-foot, $53 million Sportsplex is under construction on Spokane’s North Bank and is expected to be finished in the fall of 2021.

The concrete has been poured for the $53 million Sportsplex under construction near downtown Spokane, says Stephanie Curran, CEO of the Spokane Public Facilities District, which will own and operate the facility.

Work on the 135,000-square-foot facility began in mid-November and is expected to be completed in fall 2021.

The design-build team of Lydig Construction Inc. and Integrus Architecture PS, both of Spokane, is collaborating on the project.

The project is located on a site on the periphery of downtown Spokane known as the North Bank, just south of Dean Avenue between Washington and Howard streets. The facility will displace a portion of Cataldo Avenue that has been vacated.

Site plans show more than 75,000 square feet are dedicated to a field house, while the rest of the square footage will be occupied by 4,000-seat bleachers, at least 14 restroom areas, offices, showers and locker rooms, and a judges’ area.

It also includes a six-lane indoor track, and the facility could fit up to 16 volleyball courts, nine basketball courts, and up to 21 wrestling mats, according to the project website.

Curran says the Spokane Sports Commission also has secured its first event in the space, the 2022 U.S. Indoor Track and Field Master’s Championships.

The project is a collaboration between the Spokane Public Facilities District, Spokane County, the city of Spokane, the Spokane Parks and Recreation department, and the Spokane Sports Commission.