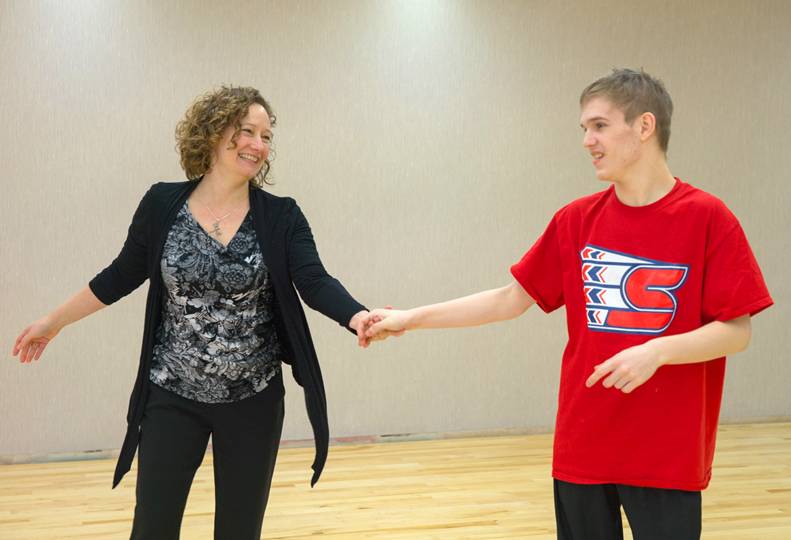 -Washington State ABLE
Former dance studio owner Amanda Hansen shows some moves to her son, Trevin, for whom she and her husband have set up an ABLE account through a young Washington state program.

Washington state has added another tool to its roster to provide financial independence for those with disabilities and is engaged in a statewide push to increase awareness of its new ABLE program.

The ABLE program, or Achieving a Better Life Experience program, was launched in Washington state in 2018 as a way for eligible people with disabilities and their families to save and withdraw money for the disabled person’s everyday expenses, says Peter Tassoni, disabilities workgroup manager for the Washington state Department of Commerce.

Spokane resident Amanda Hansen, whose family was featured in a new Washington state Department of Commerce TV commercial for the program, claims the ABLE account is one valuable tool in a laundry list of steps families should take to support family members with disabilities.

Hansen’s son, Trevin, 18, is “heavily impacted” by autism, she says.

“It improves his quality of life by allowing his family members to put a little bit of money away,” says Hansen.

The funds could help pay for Trevin’s hobbies, such as snowboarding, bike riding, and playing music on electronic keyboards, she says.

The family rolled over funds from a state 529 Guaranteed Education Tuition account that was opened when Trevin was born, Hansen says.

“He’s very enthusiastic in how he enjoys his devices,” she adds. “We go through a lot of them, and so what the ABLE account does is allow a little breathing room.”

The ABLE account is linked to Trevin’s regular checking account, and funds can be transferred easily between the two accounts, Hansen says.

Congress passed the ABLE Act in 2014 to allow states to create tax-advantaged 529A accounts for people living with disabilities and their families, he adds. Currently, eight states, including Idaho, don’t have an ABLE program set up. An individual, however, isn’t required to live in the state in which they have an ABLE account.

The National Disability Institute estimates between 130,000 and 180,000 Washingtonians are eligible for an ABLE savings plan. Of those, between 30,000 and 50,000 have the means to contribute to such an account, Tassoni says.

He adds the goal is to have 30,000 enrolled in the next decade. Currently, only about 1,200 people in the state are enrolled. The program currently has about $5.5 million in assets, he adds. Numbers aren’t available at the county level.

“The game changer here is if people have a disability, and they’re using some kind of public service benefit, they can’t have more than $2,000 in assets,” Tassoni says. The limit was established in 1983 and hasn’t been adjusted since, he adds.

Funds placed in an ABLE account are excluded from those restrictions, he says.

“By having an ABLE account, you can put that money into the account and all that money is excluded, it can’t be counted,” he says.

Tassoni says account holders have four investment options to choose from—a basic savings account, or a choice between three investment variations for the same eight mutual funds ranked as conservative, moderate, and aggressive, based on how much risk the individual is willing to take.

The conservative account is split evenly between stocks and bonds, while aggressive is 84% stocks and 16% bonds.

The variations are not locked-in for life, Tassoni adds, and account holders can make two allocation changes a year if, for example, they wished to switch from an aggressive account to a conservative one during times of market uncertainty.

To qualify, an individual must have had or developed a disability, as defined by the Social Security Administration, by the age of 26.

People can apply for the program online using their names, dates of birth, Social Security numbers, mailing addresses, and bank routing numbers. A $25 minimum deposit is required to open the account, Tassoni says. An annual $35 maintenance fee will be charged for the account.

The Social Security Administration defines a disability as “a medical condition that’s expected to last at least one year or result in death.” People who are blind, as determined by the Social Security Act, or who can produce a signed diagnosis form by a licensed physician are also eligible for an ABLE account.

Hansen adds it only took her about 15 minutes to set up an account for her son.

“The ABLE account is really easy to set up online, the minimum to fund it is very low, and it has a low annual maintenance fee,” she says.

The cap is based on the college savings ceiling established by the state and launched in 1998 and likely will be adjusted if college expenses rise over the coming years, Tassoni says.

“For me, it’s an equity argument,” Tassoni contends. “With my daughter, I can save up for her future with a college savings plan, but for my disabled son, I can’t do that. He’s not going to college. There was nothing else we could do. Now, this gives us a way to start providing some resources for him.”