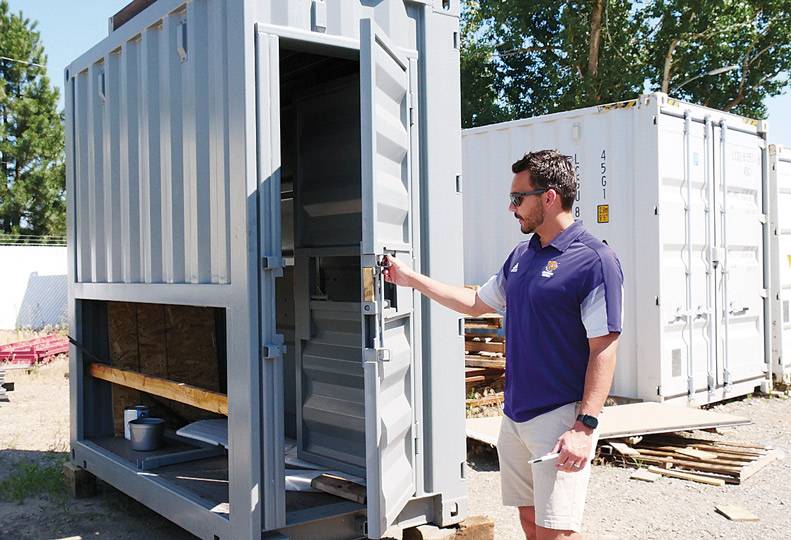 Taylor Rowan is bringing the heat to the shipping container market with the fabrication of custom-made, compact, mobile firefighter training modules, that the industry refers to as props, that are designed for fire departments to have access to a training space that can fit inside one parking spot.

Rowan, 35, is the owner of Spokane Valley-based Taylor’d Systems LLC, which does business as Taylor’d Containers. In addition to manufacturing custom fire-training props, the company also fabricates training facilities for fire departments and containers for residential or commercial uses.

The patent-pending fire prop is a mobile and customizable structure that can incorporate 10 different training apparatuses. Some of the training elements include confined space, an adjustable-pitch roof, window entry and bailout, and forced entry.

Fire-training props are different from fire-training facilities, which are permanent structures, one or more stories tall. The facilities incorporate training apparatuses and burn rooms that can be set on fire for hands-on skills training.

The company is located on a 3-acre site with a small shop at 18009 E. Appleway, in Spokane Valley, about half a mile southwest of the Interstate 90-Barker Road interchange.

Currently, the company’s four fabricators are working on the first production run of three fire-training props, two of which will be shipped in coming weeks to Richland Fire and Emergency Services, in Richland, Washington, and to Idaho National Laboratory’s fire department in Idaho Falls, Idaho, Rowan says.

Taylor’d Containers also has two administrative employees and an intern, he says.

Commercial containers are also under construction for Live Nation, a Beverly Hills, California-based event promoter and venue operator, and for a fire-training facility for Post Falls-based Kootenai County Fire and Rescue.

Before the onset of the pandemic, Taylor’d Containers had sold 15 to 20 containers per week, Rowan says. Afterward, container availability declined dramatically to about one per week, and Rowan says he had to pivot his business to cater to fire departments.

In the past five years, Taylor’d Containers revenue has grown 20% year-over-year, Rowan says. His goal for next year is to sell one training prop per week, or to have 50 sold by year-end, he says.

To meet his goal, he says he’ll need to double his fabrication team to eight and secure a larger shop where employees can work on container fabrication with protection from the elements.

“Most of our work is done outside,” he says. “But we’re in the midst of trying to purchase the property that we’re on to build a large shop to house these containers,” he says.

Rowan says company officials traveled in April to the Fire Department Instructors Conference, in Indianapolis, where the training props attracted attention and interest from fire officials representing departments across the U.S. and internationally.

“Our goal after designing the prop was to get interest from four or five different departments,” Rowan explains. “Since the show, we’ve gotten just under 200 requests for quotes worldwide for our prop.”

A finished fire prop can fit within a conventional parking space.

The idea for the company started when Rowan came across an article about constructing structures with containers that initially piqued his interest in alternative building materials while studying for a construction management degree at Western Illinois University, where he was also a placekicker on the football team.

After graduating, he moved to Spokane and played for the Spokane Shock’s arena football team for five years. After the team folded, he found a new business opportunity supplying shipping containers in the Spokane area.

Taylor’d Containers first started by selling and leasing shipping containers at the end of 2016. Within about two years, the company transitioned to custom fabrication, adding doors, windows, and side containers, he says.

Bulmer says the design and construction of the coffee stand required a total of five shipping containers, and many of his customers have commented on the structure.

“We get a lot of interest in the containers for sure,” Bulmer says. “The unique architecture certainly appeals to people.”

Bulmer says the permitting process was challenging, but he would still use shipping container structures in the future.

Before the onset of the pandemic in 2020, the Airway Heights Fire Department reached out to Rowan with a request for a quote for a new training facility on the West Plains, followed by another facility inquiry from Newman Lake Fire and Rescue.

Rowan says the Newman Lake project led to inquiries from smaller departments that wanted smaller structures so they could train without having full-blown towers.

Robin Harbin, administrative assistant at Newman Lake Fire and Rescue, says the department’s container facility has been in use since late last year.

“What’s nice about it is it can be reconfigured,” Harbin says. “So you can put in walls to make various different props and run different scenarios.”

Harbin says the fire department sold an old fire station in addition to securing a short-term loan provided by the Spokane County Investment Pool to help finance the purchase of the new facility.

The cost of the new burn building was about $256,000, including materials and fabrication, she adds.