Focus has shifted away from roads to a degree, some say 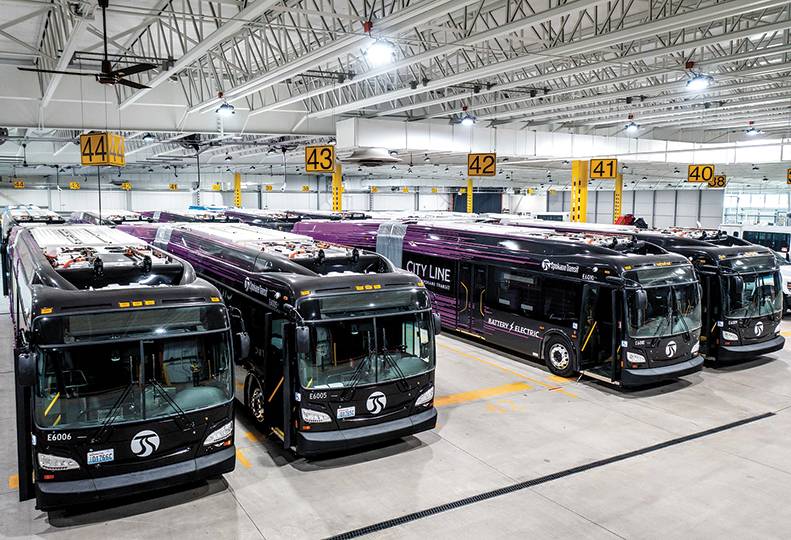 While some traditional roadway preservation and maintenance projects still will be funded, the new transportation budget includes increased emphasis on public transportation and pedestrian and bicycle transit improvements, somewhat of a contrast compared with the 2015 Connecting Washington funding package.

State Rep. Marcus Riccelli, D-Spokane, says the shift in priorities is intentional. About one-third, or over $5 billion, of the transportation package will be funded from the state’s Climate Commitment Act, which can’t be spent on road construction, but must go toward projects that are intended to reduce carbon emissions, such as public, pedestrian, and bike transit.

“I do think we’re focused on reducing pollution and traffic, having less unwalkable areas, and making sure we have accessible transit service and accessible options to get around,” Riccelli says.

Washington Policy Center’s environmental director Todd Myers is more critical of the shift in transportation priorities in the state.

He says, “They’re spending a significant portion of money on options that represent less than 10% of trips, and that’s just backwards. They are also trips that only make sense in urban areas.”

He says the vast majority of trips in the state are taken in cars, followed by public transit, then pedestrian and bicycle trips, and the investments aren’t equitable in suburban and rural areas.

Myers says he’d like to see road maintenance funded through a type of user fee for vehicles instead of fees tied to carbon use, as is in the state’s Climate Commitment Act. This way, the money raised will be tied to the roads.

In Spokane, Move Ahead Washington will provide funding to accelerate the construction of the North Spokane Corridor by two years and provide $50 million to help fund the Spokane Transit Authority’s Division Street bus rapid transit system, among other projects that have yet to be determined, says city of Spokane’s communications manager for public works and community and economic development, Kirstin Davis.

The Liberty Park land bridge project will connect the East Central neighborhood in Spokane to the Sprague Business District, he says.

However, he says, “The amount of money isn’t enough to get this fully designed. We’re working with the city to pursue more money to get the complete design.”

Gribner also agrees there is more funding in the Move Ahead Washington package for nonmotorized transit than in the previous transportation packages.

Riccelli says the state’s shift to active transit investments doesn’t take away from the preservation and maintenance projects, which remain a critical priority for the state because “we’ve underfunded that for too long. We’ve left bridges, roads, sidewalks for too long and let ferries deteriorate.”

Davis says, “Our goal is always to lift up the entire transportation system. It’s not a matter of shifting priorities for the city. It’s more of prioritizing projects that are the most likely to receive funding.”

She says that research and environmental studies will take a significant amount of time, which means Spokane likely won’t see any new construction activity funded from Move Ahead Washington this year.

Gribner, of the Department of Transportation, agrees the public likely won’t see any projects built this year from the new transportation funding, but work may begin on the public-engagement sessions for local projects, including the Liberty Park Land Bridge design plans.

Davis says some of the city projects are focused on pedestrian and bicycle improvements around greenways to get people and bikes off of the main arterials for safer nonmotorized travel.

Davis says the city’s bike and pedestrian projects include $5.8 million for Millwood Trail, $3.9 million for Pacific Avenue greenway, and $2.2 million for the Cook Street greenway.

“We got those all funded,” Riccelli says, adding, “We did all this without raising the gas tax.”

Myers, of the Washington Policy Center counters, “Instead of raising gas taxes, they put a carbon tax, which is important because Washington state Constitution states if gas taxes are raised, it must go to roads and road maintenance.”

Myers says that if the state had wanted to invest more money into preserving and maintaining roadways, they could have done so and wouldn’t have included funding from the Climate Commitment Act. He adds that the state’s roads are in a poor condition as it is and could have used the additional funding.