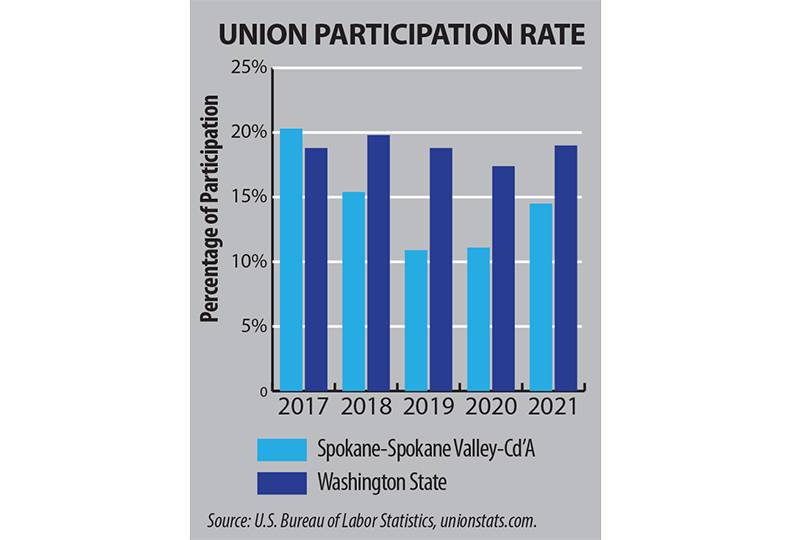 The union participation rate in the Spokane-Coeur d’Alene area trails Washington state, but outpaces the nation as a whole, according to recently released data.

At all levels, the rate of unionized workers has grown during the pandemic.

In the Spokane-Coeur d’Alene area, the percentage of union workers increased to 14.5% as of 2021, up from 11.1% in 2020, according to unionstats.com, which keeps track of union membership, coverage, density, and employment using U.S. Bureau of Labor Statistics methods.

That’s well below the state level, according to BLS data. Union members accounted for 19% of wage and salary workers in Washington last year, up from 2020’s 17.4% participation rate. At that level of unionization, the state ranks third in the U.S., behind only Hawaii and New York.

In a release, BLS, which is part of the U.S. Department of Labor, notes that the onset of the pandemic in 2020 led to an increase in the unionization rate for the nation due to a disproportionately large decline in the number of nonunion workers compared with the drop in the number of union jobs. Union rates in 2021 are a continued reflection of the impact of the pandemic on the labor market, and comparison data between the two years should be interpreted with caution, the report states.

David Macpherson, professor of economics at San Antonio, Texas-based Trinity University and the co-author of unionstats.com, says he believes that the tight labor market coupled with a low unemployment rate contribute to growth in union organizing efforts.

In addition, Macpherson notes that union participation rate is high in states and geographic areas where higher percentages of the workforce are public-sector employees.

In Washington state, public-sector employees make up 54% of the workforce, while 45% of the Spokane-area workforce is in the public sector, according to unionstats.com. The rest of the country falls in the 30% range.

“If I had to think of a single most important reason why the unionization rate is higher in Washington, that would be it,” says Macpherson.

Patrick Jones, executive director of public policy and economic analysis at Eastern Washington University, concurs with the idea that union participation rate is highest in the public sector, and the current low unemployment rate and high number of jobs available to unemployed people may lead to higher unionization.

He notes unions traditionally have been active in the manufacturing sector, and that there are bigger manufacturing components in other parts of the state than in Spokane.

Manufacturing is cited as the fifth or sixth largest sectors in Spokane; however, it isn’t as prominent as in Snohomish County where the aerospace industry dominates manufacturing, says Jones.

He also contends it’s easier to unionize larger employers, and Spokane doesn’t have many companies that employ over 500 people.

“Spokane, in general—not just in manufacturing—is an economy of small business,” says Jones.

Union leaders here say that one factor that contributes to a lower participation rate in the Spokane area is Spokane County’s proximity to neighboring Idaho.

Idaho is what’s referred to as a right-to-work state, which prohibits employers and unions from requiring that workers join unions as a condition of employment.

“Our union membership as a whole is higher than the national average, but we may be lower than the state average. I view that as, we’re right next to Idaho,” says Val Holstrom, Spokane-based secretary treasurer of the Teamsters Local Union No. 690.

Beginning in 2015, the BLS enlarged the area for Spokane data collection to include Spokane Valley and Coeur d’Alene as one geographic location. From 2015 to 2021, the average union participation rate is 15.8%, according to data from unionstats.com.

More recently, on March 22, the National Labor Relations Board announced that employees at a Starbucks store in Seattle had voted to unionize. Two weeks later, on Friday April 1, workers from an Amazon warehouse in New York City voted to unionize.

In a Gallup poll published last September, the approval rate for unions was 68%, the highest it’s been since 1965.