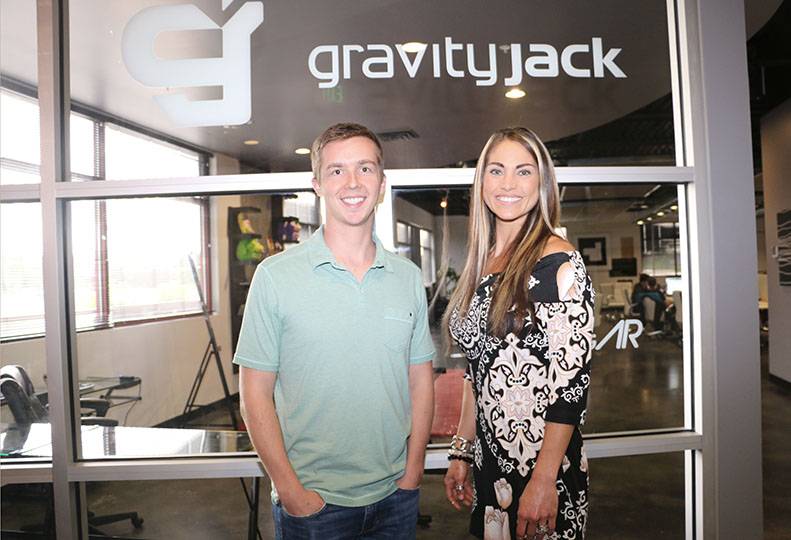 Gravity Jack Inc., the Liberty Lake custom mobile application and augmented reality software developer, has doubled its revenues thus far in 2014, and is expecting to do it again in 2015, says co-founder Jennifer Richey.

“I know we doubled this year, and we’ve maintained our employee numbers,” Richey says, although she declined to disclose specific revenue figures for the company.

Gravity Jack, which is located in an about 6,000-square-foot office at 23505 E. Appleway in Liberty Lake, has about 25 employees total, Richey says. It has satellite offices in Denver and Chicago, with two additional offices planned in Washington, D.C. and Nashville, Tenn.

Ryan Darbonne, director of marketing and communications for Gravity Jack, says that at this point, the company isn’t sure which additional office will open first, but both are in the works. Gravity Jack evaluates potential office locations to increase its availability in key markets, Darbonne says, as well as to recruit new talent in those areas.

Richey says the company also does a lot of internships.

“A lot of our interns turn into employees,” she says.

“Virtual reality immerses a person in an environment, a digital scene, and is completely dependent on hardware,” he says. “Augmented reality is a view of a real scene with digital information imprinted on top of it.”

A classic example of augmented reality is the yellow line that appears on the television screen during football games to show the first-down mark, Darbonne says.

“Now, instead of the yellow line, we have 3-D gaming, music, GPS positioning capabilities, (and more),” Darbonne says.

As an example, Gravity Jack recently created an application for the band Maroon 5, as part of its relationship with the band’s tour management company, Live Nation.

A user can hold their phone’s camera over an image of the band’s album art, and a music video appears on the screen.

“You can augment anything,” she says.

Gravity Jack launched in November of 2009 as a mobile software developer. It was founded by Richey’s husband Luke Richey and Terry Hoy, both of whom are still with the company. In 2012, Gravity Jack also received an investment through an angel fund here, called Kick-Start I, which was founded by Spokane entrepreneur and angel-investing fund organizer Tom Simpson.

The company had successful years in 2010 and 2011, Richey says, and then began to create its own software development kit for augmented reality programs.

Gravity Jack originally also sought investments from venture capitalists in its first few years, Richey says. However, the company decided to move away from venture capital without signing with any firms, because it felt the investors would exert too much control.

“They give you millions, but take a huge chunk,” she says. “They direct you on how the business needs to be run. It’s like (the television show) ‘Shark Tank’… you are going to go down this specific path.”

At the end of 2012, the company decided to switch entirely to customized developments for clients, and began making partnerships.

“Once you start with them, the relationship just blossoms,” she says.

Darbonne says that once Gravity Jack decided to move away from venture capital investors, it began to look for ways to use customization to support itself. The company had smaller clients for a while, he says, because it took larger ones a while to catch on to the concept of augmented reality.

“We were focused on specializing in augmented reality, and there’s obviously a timeline of adaptation,” he says.

Gravity Jack saw opportunities for using augmented reality in entertainment and rich media, as well as education, Darbonne says. As an example, he says the company created a “D-Day: June 6, 1944” app for The Greatest Generation Foundation, an international nonprofit war veterans recognition organization based in Denver.

A user with the free application scans a large classroom map, and an augmented reality video pops up on the screen on top of the map. The augmented reality experience walks the user through the D-Day timeline using sound, animation, and other multimedia.

The company also created an application for Kraft’s Oscar Meyer brand, specifically for its Hot Dogger Wienermobile. The application includes a game for users as well as enables them to scan Oscar Meyer products and see an image pop up. Gravity Jack is an official partner of Kraft, Darbonne says.

“We were lucky that Oscar Meyer was the first brand they gave us,” he says. “It was really fun.”

Darbonne says an application could take as little as a month or as long as a few years to develop and launch.

“You have updates on your phone every day,” she says. “We make it appealing enough to them to know they can, and should, come back to us (for updates),” she says.

The cost for one of Gravity Jack’s applications varies greatly depending on the scope and features, Richey says. The Oscar Meyer app, for example, cost about $250,000, she says.

Another example of the company’s products can be found in its work for Sumitomo Drive Technologies, which sells transmissions and other drive technologies. The company was looking for a new way to show customers its products in detail, Darbonne says. The transmissions are very large and heavy, and not easily transportable. Gravity Jack created a mobile product that scans an image of the transmission and then shows the transmission in 3-D detail, and can even blow it apart to show the individual pieces.

Having strategic partnerships also has helped the company continue to grow, Richey says. The company is a preferred developer with Qualcomm Vuforia, the augmented reality division of San Diego-based telecommunications company Qualcomm Inc.

“They have expanded on the possibilities of augmented reality from behind the scenes, the technical perspective, but they don’t do any development (themselves),” she says. “If you’re up to par, developing applications that showcase augmented reality, they will look at the work that you’ve done and vet you. They have a very short list of developers.”

Large companies will sometimes go to Qualcomm looking to have an application developed, Richey says, Qualcomm often then will send the company to one of its preferred developers.

Locally, Richey says she would love to do an augmented reality application for the Spokane Convention Center & Opera House.

“The ideas I have for that are endless,” she says.