Gravity Labs hopes to bring matchmaking to the masses

Dating startup completes first funding round, hopes to launch app this May 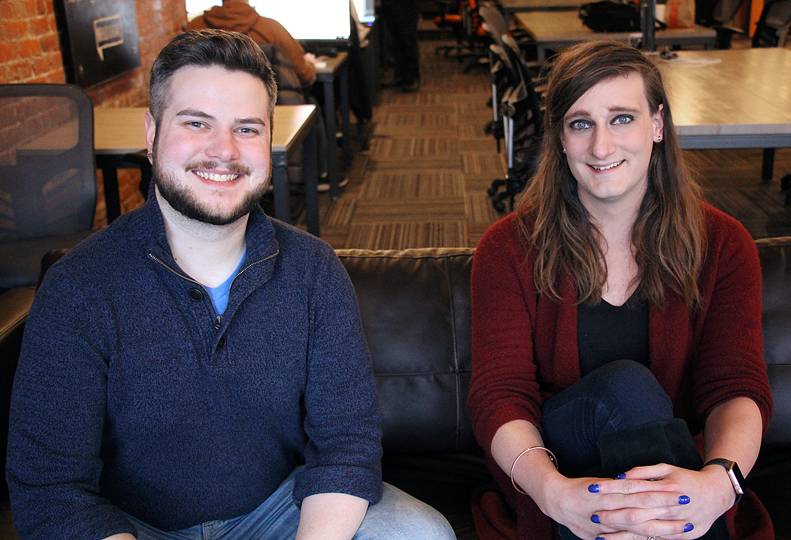 Spokane entrepreneurs Robbi Katherine Anthony and Patrick McHugh have partnered to create Gravity, a new dating app where instead of choosing your matches, other users choose for you.

Anthony, founder of Spokane-based software developing company Firedove Technology, says she had been kicking around the idea for Gravity for a while, and the idea picked up steam in November, when she attended Startup Weekend.

The team took first place at the competition, and since then, Anthony says she and McHugh have been weaving through the Spokane startup scene and working to secure funding, the first round of which was closed Feb. 4 through Spokane-based Mind to Market LLC.

Anthony and McHugh formally incorporated the enterprise as Gravity Labs LLC earlier this month, and the company currently has a patent pending for the application.

What sets Gravity apart from other dating applications, says Anthony, is that users won’t be picking their own matches. Instead, they will be relying on the wisdom of the crowd to match them.

“If you look at the two paradigms of dating apps, they generally fall into two categories, one of which is self-selecting dating apps, and a good analogy for that is Tinder … it’s akin to going to a bar and catching someone’s eye and buying them a drink or having a conversation, and then the other type is the algorithm, so you fill out a survey and you send it in to the machine, and it spits back results.”

Anthony argues that one of the most popular and successful ways to meet people is through matchmaking.

“When we looked at the market, there really wasn’t anything that did that in the visual sense,” she says. “And so what Gravity does is that it’s a matchmaking platform, so when you sign onto it, you can’t make matches for yourself; you’re making matches for the other users.”

To take it a step further, Anthony says Gravity has a gaming component in which displays points on a leaderboard of users who successfully match others. Users will be able to compete with friends, regional users, and eventually global users, she says, to determine the best matchmaker.

“We all know that friend who thinks they’re the best matchmaker, but they’re genuinely terrible at it, and now we can empirically prove it,” Anthony says.

Another intriguing aspect of Gravity is that the app is available to all, regardless of relationship status, Anthony says. While traditional dating applications are typically geared toward single individuals, Gravity allows those of any relationship status to participate in the matchmaking process, allowing those in committed relationships to participate in the addictive dating application scene, as Anthony calls it, without the skeevy connotations.

Mark Gustafson, senior manager of business development and strategy with Avista Development Inc. and managing partner for Mind to Market, says the Gravity team has been participating in Mind to Market’s startup accelerator program.

Gravity is moving into the operations phase of the program, in which the company will be connected to resources such as software companies and local entrepreneur mentorships, as well as funding sources outside the region, says Gustafson.

While Gustafson notes with some caution that less than 5 percent of startups make it to the second round of funding, he says that Gravity’s market strategy of focusing locally for the initial launch will give the company the flexibility to make mistakes and adjust them before a national launch.

That’s similar to the way Facebook started, in that Anthony and McHugh aren’t trying to sell to the whole world before they get the company off the ground.

Anthony says the company secured $25,000 from Mind to Market for its first round of funding and currently is working on securing additional funds. Gravity had the opportunity to present to the Spokane Angel Alliance in January and currently are awaiting a decision.

The Spokane Angel Alliance is an investor group focused on emerging companies in Eastern Washington, Idaho, and Montana.

Tom Simpson, president of the Spokane Angel Alliance, says he believes Gravity is a novel idea that’s different from other dating applications currently in use, and because anyone can use the app regardless of relationship status, it might have a broader market than other apps, making the company potentially more viable.

Simpson says there’s no set timeline for making a decision with regard to funding.

The initial focus will be on local college campuses like Eastern Washington University, Gonzaga University, and Whitworth University, and then will expand to the region once they reach a certain threshold of users, Anthony says, with a set target of 50,000 users by the end of the first year. She anticipates a steady linear growth and plans to roll the app out in steps to allow for adjustments as it goes.

Currently, only Anthony and McHugh are active employees of the organization, with Anthony handling the coding and developing portions and McHugh managing the company. Anthony says they hope to expand once funding is secured and plans to hire on other employees in the near future.