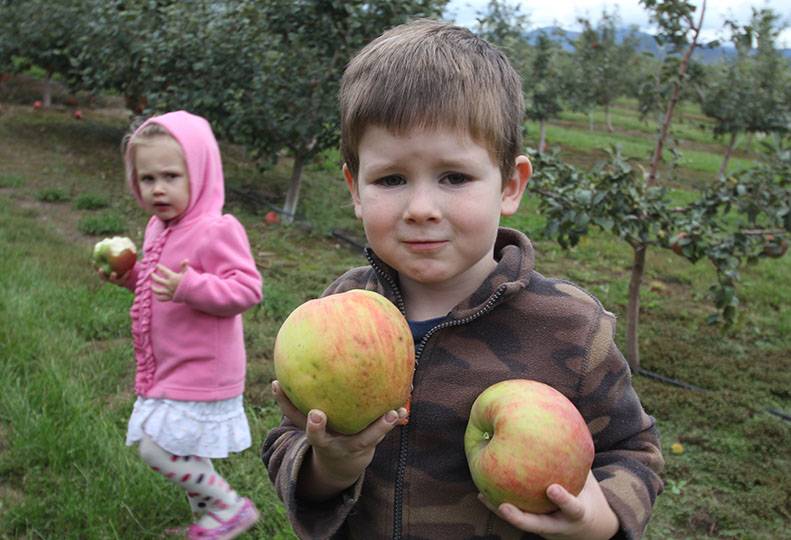 -—Staff photo by Treva Lind
Vance Organ, 4, holds the apples he picked from the orchard at Harvest House while Sophie Staples, 3, looks on. 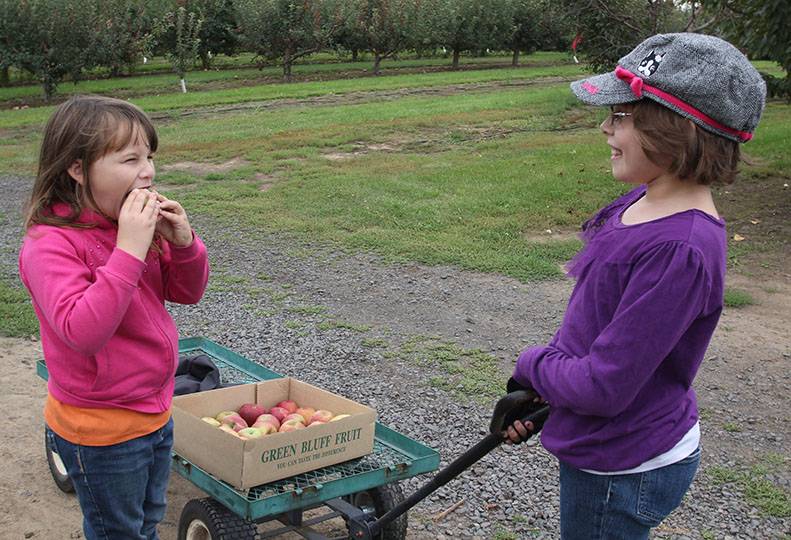 Owners of agricultural businesses in Green Bluff are gearing up to draw visitors to several weekends of fall events, after experiencing slow traffic early in the growing season that operators attributed to construction on nearby Bruce Road.

Spokane County's $1.5 million repaving project northeast of Spokane, which is expected to wrap up this week, closed more than three miles of Bruce between Stoneman and Day Mount Spokane roads, which is a major access route into Green Bluff for visitors coming from Spokane Valley and North Idaho.

"We noticed a marked slowdown during the road closure," says Mike Beckman, president of the Green Bluff Growers Association and co-owner of Legacy Farm, a Christmas tree farm. "Apple Festival is just starting. Hopefully, our traffic will come back."

Green Bluff Growers Association, which includes nearly 50 agricultural business members, is holding its Apple Festival during weekends extending through the end of October. Many of the operations are offering U-pick produce, fall craft booths, live music, corn mazes, and food.

As another source of income, about half a dozen Green Bluff operators also offer event venues for weddings, which are picking up this year, Beckman says. However, he says some other Green Bluff businesses are opposed to the noise from those venues' amplified music, so the county apparently is reviewing whether those weddings should be an allowed use next year under zoning rules.

"It's an aspect of economic growth to bring business in here, and it's such a beautiful place for members of our community to hold weddings," he says. "They're each doing a thriving business with them. I think the overriding issue with the opponents of this is the noise, and it's a valid concern."

Meanwhile, Beckman says an example of a new Green Bluff operator expected to draw more tourists this year is Willowpond Pottery & Herbs, which opened in August after renovating a 100-year-old barn into a retail shop and pottery studio, with an adjacent herb garden.

He says another business, 3 Billy Goats Bluff, is an example of a grower adding more agricultural features this year, which for that operator includes the addition of a blueberry patch.

Todd Beck, co-owner of Harvest House, says he and other operators are seeing customer numbers gradually pick up with the beginning of fall festival events. On a recent Saturday, parents and kids wandered through Harvest House's orchards to pick several apple varieties.

Beck says many operators felt a significant impact from the Bruce Road construction work, and that travelers trying to reach Green Bluff from the south had few directional signs to follow detours to get to farms.

"The year started out great, then the county shut down Bruce, and it absolutely killed business for a lot of people up here," Beck says. "It's affected us for a few weeks, but when you only have four months to do everything, it has an effect."

Beck adds, "Overall, I think it will be a decent year. The crops look great."

Janet Thorson, co-owner of Thorson's Country Farm, says that many customers traveling to Green Bluff seem increasingly concerned about the freshness of produce, often preferring to pick fruit or vegetables themselves.

"I think people are starting to become a little more aware of the time lag that's involved with the grocery store stuff," Thorson says. "There's also people who if they want to U-pick, and there are items that are not U-pick, they don't want it. It is a problem with some crops like onions and garlic that need to be cured some. They need to be hung and dried, for at least two weeks."

Although Thorson's Country Farms grows much of the traditional produce found on Green Bluff, from apricots and cherries to apples, Thorson says the family operation is always experimenting with new ideas to attract customers.

"This year, I'm doing a lot with garlic, and we grow several different kinds of onions, some new varieties of potatoes," Thorson says. "We're trying to get in different things, expand out the normal, commonplace produce."

She adds, "There are people who are getting a lot more interested in what they're eating. We get in the most interesting discussions with customers about ideas on how to cook things. It's broadened my cooking."

Thorson says Green Bluff's farmers, orchardists, and other businesses already are thinking about how to put additional directional signs out next year for another construction project to replace a bridge on Bruce Road that again will affect a section where repaving occurred this year.

Chad Coles, Spokane County assistant engineer, says the county plans to begin the $2 million bridge replacement next summer on Bruce that will close a portion of that road again for nearly four months, this time between Peone and Day Mount Spokane roads.

"We will have detours similar to the one going on right now, although the project currently going on goes farther south and farther north," Coles says.

Meanwhile, Willowpond Pottery & Herbs co-owner Cindi Crist, who is a pottery artist, says that new business is focused on offering views from a window for visitors to see her hand-thrown pottery work. Her husband, Kurt Crist, grows the operation's organic herbs used for cooking.

The couple sells basil, Italian flat-leaf parsley, dill, and cilantro, among other herbs.

"We opened for business just a month ago, and it took us two years to get the place ready," she says. The Crists moved a Spokane Valley barn once used for an apple orchard operation there but was on the verge of collapse. After taking photos, the couple arranged to collapse the barn and move the wood pieces to create a renovated 1,800-square-foot barn on the business's 10 acres on Green Bluff.

"Kurt and I refinished the inside of it," she says, "I'm a pottery artist, so I have this big observation window as you come into the barn's retail area. You can watch me throw clay, and people can watch the process of how pottery is made."

The barn has the studio, kiln room, retail space, and a courtyard leading into the herb garden.

"Business has been gradually picking up," Crist says. "Each weekend, we're gradually getting more and more people, and sales have increased slightly."

"We're unique to what's up on the bluff," she adds. "We have a little bit more of a Mediterranean feel. People say it looks like an English country cottage farm."