Autumn’s apples rule for most growers, but many diversify 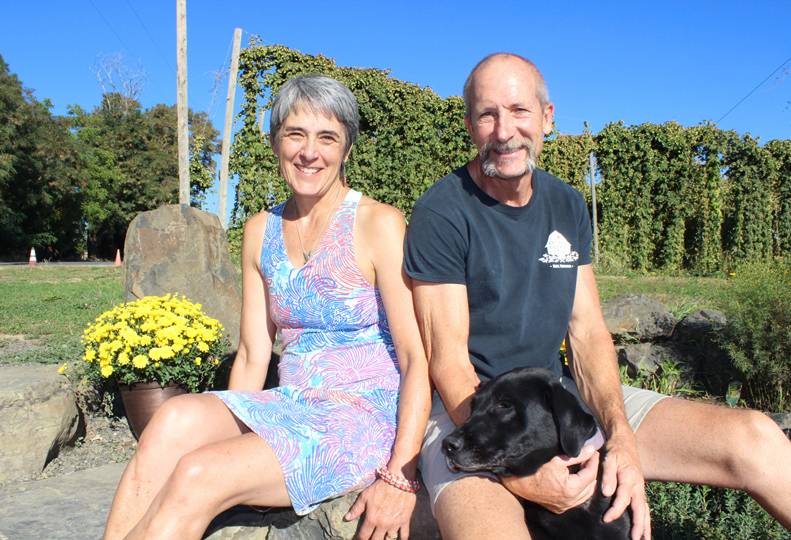 -—Treva Lind
Jane and Craig Deitz, with dog Nandi, grow hops, in background, that they use in the beer they make at their Green Bluff farm. Big Barn Brewing has become an all-season draw for the Deitzes. 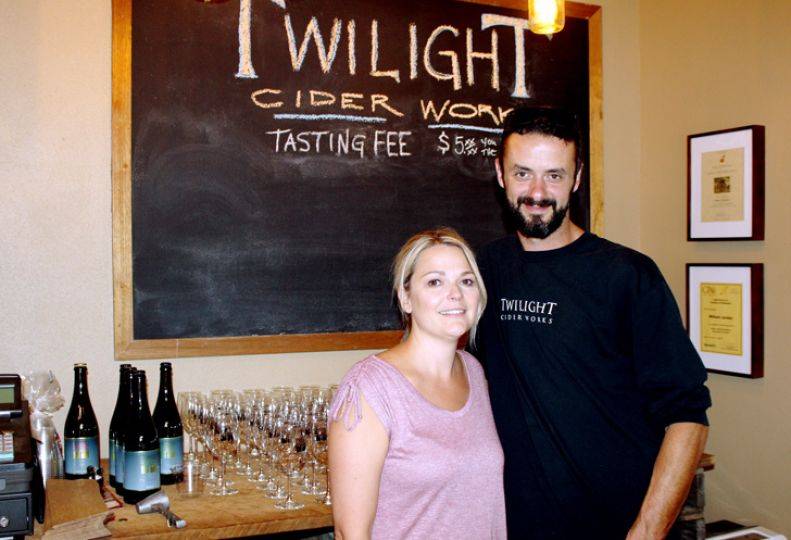 As people gathered across a wide lawn, some played games while others relaxed in chairs. A steady number of individuals walked into the property’s Big Barn Brewing tap room to buy freshly brewed beers using some ingredients grown on the farm.

Bodacious Berries Fruit & Brews LLC is a family-operated business and just one example of Green Bluff agricultural businesses diversifying and bringing value-added products and events during a wider span of the year. Much of that activity has occurred in the past five years to attract more customers, often younger people, to the region about 18 miles north of Spokane.

“With just a crop alone, it’s difficult to generate enough income,” says Craig Deitz, who with his wife Jane Deitz operates Bodacious and the complementary Big Barn Brewing, which opened on the farm in 2012.

He adds, “Our blackberries just didn’t do well this year, so if we hadn’t diversified, it wouldn’t have been enough. To have a place for people to visit and see things, I think is important for our survival. We’ll be having customers do a tour to see how I’m going to harvest my hops.”

Green Bluff, in the foothills of Mount Spokane, is marketed as an agricultural-tourism destination with more than 30 small farms offering produce and seasonal outdoor activities.

The Green Bluff Growers Association, founded in 1902, promotes the region and is trying to raise awareness about multiple festivals from spring to the end of the year. The aim is to bring more visitors beyond Green Bluff’s popular fall events.

“Traditionally, Green Bluff gets 80 percent of its business in October because of the Apple Festival; it’s the most popular festival we have,” says Will Jordan, association president and co-owner of Twilight Cider Works, at Green Bluff. “As a direct marketing association, we’ve been directing focus of our marketing toward making the Inland Northwest aware of our other events that start in May and go into December.”

He adds, “We have more than just apples and pumpkins.”

Green Bluff farms offer a variety of fruits—including the bumper crop of cherries this year—and vegetables. The produce is picked ahead and sold from stands and stores sometimes, but more often, orchards and fields are set up so that visitors can pick their own produce. Many operations also sell food products made from farm ingredients, such as jams, pies, and ciders.

Recent marketing efforts appear to be working to draw a customer flow, based on a sharp curve of more traffic each weekend from spring to Oct. 31, Jordan says. He and his wife Jackie Jordan opened Twilight Cider Works about five years ago with production and a small tasting room along Day Mt. Spokane Road.

Twilight produces a variety of artisan hard ciders from apples grown on a family orchard and from growers regionally, with the apples fermented all winter and bottling in the spring. Its tasting room is open seasonally, but a year ago, Twilight partnered with Hierophant Meadery, a Green Bluff maker of honey wines, to open a year-round, co-op tasting room called Solace Mead & Cider in Kendall Yards.

Jackie Jordan is the daughter of Rick Roening, of family-owned Roenings on Green Bluff. She sees the uptick in nearly year-round events and more diverse businesses at Green Bluff as drawing a core of younger customers.

“They’re younger people who are bringing their families up here who may not have experienced Green Bluff before,” she says. “And they keep coming up after that.”

Bodacious’ Craig Deitz gives other examples of customers’ choices at farms, including petting zoos, corn mazes, and entertainment events. The Deitz property offers wagon rides for customers to get their Christmas trees.

The company recently added strawberries to crops sold that now include raspberries, blackberries, peaches, carrots, potatoes, pumpkins and apples from a nearby farm owned by Deitz’s mother.

“That’s the trick, to have enough different crops that you have enough people coming in and taking advantage of the full spectrum of the growing season,” says Jane Deitz. “The Big Barn is year-round. With the pumpkin patch and Christmas trees, the profit margin is wider. The farm is separate from the brewery, and we’re paying a big tax on alcohol sales, but the brewery is really our meat and potatoes right now.”

Bodacious planted hops for use in beer making, starting with a pilot patch that did well before expanding the crop into 2 acres. “This is the first year for us to harvest that,” she says. “We’re a farm-to-bottle brewery; that’s our goal.”

They use another farm’s pumpkins for pumpkin beer, but other of its libations include Bodacious’ raspberries as well as the hops, and the brewery buys those from the farm operation, she says.

Bodacious scheduled musical performers on Sundays during the summer that did well this year. Farmers are in a sense maintaining open spaces, along with agricultural traditions, so diversifying with products and services helps the operations stay viable, Craig Deitz says.

“In maintaining our farms and open spaces, we have a privately-maintained park system,” he says. “People can go out on orchards and pick apples and see how things grow. I think for Spokane County, we’ve really become a destination.”

Deitz asserts that Spokane County regulations are inconsistent at times and make it challenging to add new services, such as launching a brewery or adding food service. A couple of the wedding venues had to follow strict rules to open, he says.

In 2014, Spokane County commissioners adopted a new ordinance affecting special events at Green Bluff defined as weddings, graduations, and corporate gatherings, among others. The new rules limit special events to Fridays through Sunday, and specify standards for noise, times, fire safety, and parking, among other issues.

Many Green Bluff farms are seeing a rise in business, Deitz says. He attributes the addition of the brewery to allowing him, at age 58, and his wife, at 55, to retire early from teaching careers to concentrate on operations. It also meant the hiring of three full-time employees, including their son and several part-time workers who are seasonal.

“I taught for 35 years, and without this, we would not have had the option to step away,” he says. “We’re not making big bucks; we made more as teachers.”

Selling pies in grocery stores is one way that Morghan Morrell, 34, and her husband Jason Morrell, 43, have extended Walters’ Fruit Ranch into a year-round business. The couple purchased the operation from parents a few years ago, and its pies are sold in Yoke’s and Huckleberry’s Natural Market supermarkets.

Walters’ Fruit Ranch also added strawberries back in as a crop two years ago for a draw in June, and it offers you-cut Christmas trees.

“We planted Christmas trees 12 years ago, but it takes a good seven years to grow, so we’ve been doing it strong the past five years,” says Morghan Morrell.

She agrees that Green Bluff business has picked up the past few years.

“I feel like Spokane has grown; we get a lot of new families each year,” she says. “It’s great to educate children about where their food comes from. Our festivals have definitely gotten bigger with attendance, and it’s a lot of fun for families, something different than the normal come-up-and-pick-your-apples.”