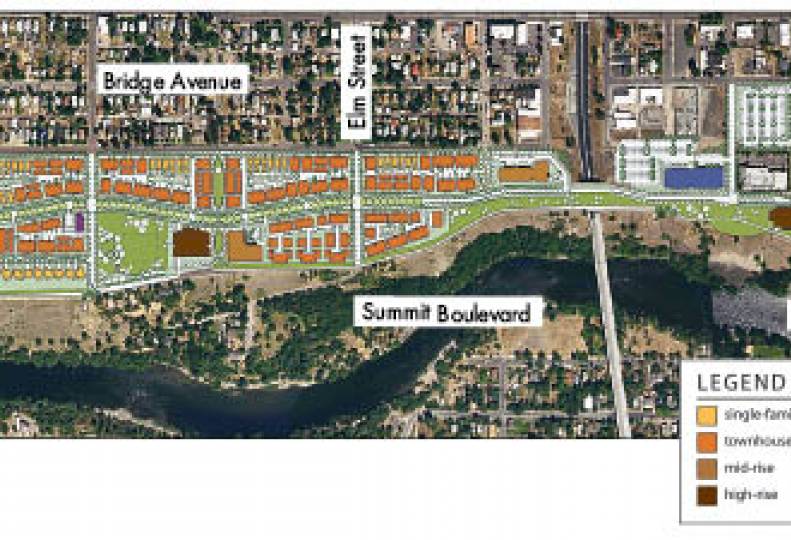 Greenstone Corp., the Liberty Lake real estate development company that has acquired Kendall Yards, says it will kick off its planned $500 million urban community this year with the first of six phases of residential units and part of a main east-west boulevard that will bisect the 78-acre parcel on the Spokane River bluff north of downtown Spokane.

Phase one of the residential construction will include a total of 70 residential units that Greenstone will develop in a combination of town houses and single-family homes west of Maple Street between Elm and Oak streets, says Jim Frank, the company's founder and CEO.

Greenstone will ask the city for expedited approval of phase one of the residential development, based on proposed boundary adjustments of an existing plat, so that work can begin as soon as possible, he says.

As Greenstone develops the homes along Bridge Street, it will construct the part of the main east-west street that will run from Monroe Street to Elm Street at a cost of more than $5 million, Frank says. The street will be named Summit Boulevard, because it eventually will connect to that street on the west edge of Kendall Yards, he says.

The new Summit Boulevard will run roughly parallel to and a block south of Bridge Street, about midway between Bridge Street and the bluff overlooking the Spokane River gorge, he says.

Summit Boulevard will have a single vehicle lane and a parking lane in each direction, Frank says. Plans for the street include landscaped center islands, and it will be lined with trees between the street and the sidewalks. "We're hoping it will become one of the most beautiful streets in Spokane," Frank says.

After the first portion of Summit Boulevard is completed, possibly sometime next year, other homes in phase one will be developed east of Elm, between Summit and the bluff, Frank says.

Floor space in the homes in phase one will range from 1,100 square feet to 1,500 square feet. Prices will start at $150,000 for town houses on Bridge Street, and single-family homes overlooking the bluff might be priced at close to $1 million, he says.

"We are committed to the project's economic diversity," Frank says.

Greenstone acquired the property in November from River Front Property LLC, a company headed by Coeur d'Alene developer Marshall Chesrown. Terms of the transaction weren't disclosed, except that Greenstone says it will restructure $20 million in debt on the development, with Washington Trust Bank, of Spokane, providing project financing.

The new owner also has filed an application with the city to amend and scale down the density of the original commercial and residential planned unit development envisioned by Chesrown. Frank says the city will have to approve the amendment before Greenstone starts work on phase one.

Under Chesrown, the Kendall Yards PUD was to have included 2,600 mid- and high-end residential units, and 1 million square feet of commercial space.

"Instead of four- to six-story buildings, there will be a lot of single-family lots," Frank says of the main residential part of the site, although some mid- and high-rise condominium structures are planned at what's called the High Point area overlooking the Sandifur Bridge at the west edge of Kendall Yards. A 12-story residential structure also is planned in the commercial district, next to an envisioned 12-story hotel at the southeast corner of the site near Monroe Street, Greenstone's proposed PUD update shows.

Because Greenstone's proposed density and the traffic it would generate would be far lower than previously planned for Kendall Yards, an intersection with traffic signals and turn lanes wouldn't be needed at Summit Boulevard and Maple Street, says Jason Wheaton, president of Greenstone. Instead, an overpass would carry Summit over Maple, and the main access to Kendall Yards would be at Summit Boulevard and Monroe Street, Wheaton says.

A significant amount of the infrastructure for the commercial district would be constructed with the development of Summit Boulevard, and other commercial development would occur as market conditions allow, Frank says.

Because the buildings would be scaled down from the current PUD, the commercial district would have room for surface parking for about 350 vehicles, Frank says. A four-level parking garage would have about 850 parking spaces, he says. Chesrown's plan mainly had parking spaces in garages.

In the new plan, the parking garage and a supermarket or other retail store are envisioned on the north part of the commercial district, east of the Spokane Regional Health District building, the proposed PUD update shows.

The commercial district also would include two five-story office structures with up to 30,000 square feet of space per floor, Frank says.

A plaza mall in the commercial district will feature a strip of open space that will be part of a view corridor from the Spokane County Courthouse to the Spokane River, he says.

Greenstone plans to dedicate Ohio Street, which runs along the bluff on the south edge of Kendall Yards, as Centennial Trail right of way, which would be included in a linear park, or one that would stretch along the bluff, Frank says.

Most of the linear park will remain in its natural state consistent with a master plan for Great Gorge Park, Frank says. Great Gorge Park is planned along both sides of the Spokane River from lower Spokane River Falls downstream to the confluence of Latah Creek, encompassing 100 acres of mostly city-owned land.

Greenstone plans to dedicate a connected 3.5-acre park at the south end of Nettleton Street in honor of landscape architects Fredrick Law Olmstead Jr. and John Charles Olmstead, who envisioned the Great Gorge Park a century ago, Frank says.

Pedestrian access to the parks and the Centennial Trail will be enhanced through nonmotorized extensions of Cochran and Chestnut streets south of Bridge Avenue, he says.

Frank says about 200 potential home buyers have signed up on an interested-party list for Kendall Yards.

He says he doesn't expect Kendall Yards to compete with other Greenstone developments, such as the River District, a 900-acre mixed-use development under way in Liberty Lake.

"They appeal to separate markets," he says. "People in Kendall Yards either will work downtown or will be move-down buyers who want to move out of larger homes."