Growing Project Beauty Share collects cosmetics for a cause 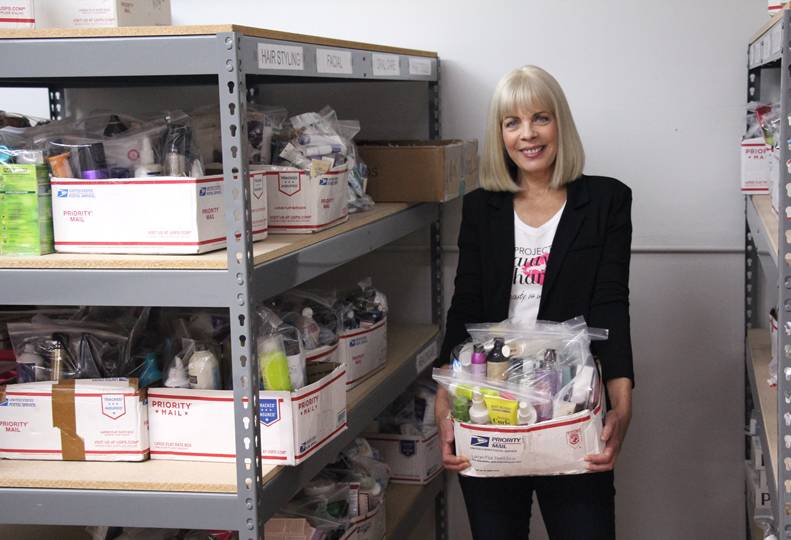 Project Beauty Share, located in a 4,400-square-foot building at 2718 E. Sprague, collects new and gently used cosmetics and hygiene items, which are sanitized and distributed to shelters and transitional housing organizations. Most of those are in Spokane, but Farley says Project Beauty Share serves organizations throughout Spokane County and Eastern Washington.

Farley says Project Beauty Share, which has a 2019 operating budget of about $236,000, can’t afford to ship products that far, and it’s not practical for someone to mail a box of items to Project Beauty Share and then have the organization mail products elsewhere. From this conundrum came Project Beauty Share’s new National Beauty Drive campaign, which will wrap up at the end of this month.

“It just doesn’t make sense for women to spend $30 to ship a box of gently used products here,” Farley says. “So, we thought, why don’t we inspire them to do a beauty drive in their community?”

The campaign invites people to find an agency or shelter in their community that aligns with Project Beauty Share’s mission to help women and their families who are facing abuse, addiction, homelessness, and poverty, and coordinate with a group of friends, co-workers, and family members to collect new hygiene items to donate to the organization of their choice.

Farley says she’s fielded interest in Project Beauty Share’s model from as far away as Australia and Israel.

“If people want to know how to do it, they can come here and go to our ‘university’ and then take that information home to their community and replicate what we do,” she says.

The organization receives products new from beauty companies, such as Clairol or Thrive Causemetics, and gently used from individual donors. Upon arrival of the products, volunteers organize them by category in large plastic bins, sanitize products with bleach wipes or rubbing alcohol, and place the products into smaller bins for more specific categories. Farley puts together bags of products, which are then packed into bins for local organizations to pick up.

Each organization receives two bins at least once per month, depending on how many people the organization serves. Some only request bins from Project Beauty Share for special occasions, like Valentine’s Day or Mother’s Day.

Farley says Project Beauty Share averages about 100 boxes of products mailed in by donors each week, in addition to donations collected at drop-off donation sites throughout Spokane and Coeur d’Alene and palettes of new products donated by corporations.

“We’re a very serendipitous organization,” Farley says. “Every day is something new. You never know what’ll come through the door.”

The roughly 1,000-square-foot warehouse portion of Project Beauty Share is often filled with palettes of boxes holding hundreds of donated products. Farley says board member Laura Lawton has donated some space in the warehouse of Lawton Printing.

“We were lucky that one of our board members has a warehouse where we can offload, because we don’t have a dock-high warehouse,” Farley says. “That’s our biggest obstacle right now, having that warehouse space. Someday, hopefully, we’ll have that.”

Project Beauty Share has seen a boost in donations since Seattle-based YouTube beauty video blogger and influencer Taylor H., whose online handle is Thataylaa, became involved with the organization. Farley says Taylor reached out after some of her followers asked where they could donate gently used cosmetics.

“We had a conversation, she vlogged about it, and it’s never been the same,” Farley says. “The beauty vloggers, the influencers, they’re pretty much running the beauty industry these days.”

Farley says that some people mistakenly believe Project Beauty Share accepts only cosmetics, but the organization also collects hygiene items, from soap to toilet paper to feminine hygiene products. She says she recognized a need for such products from the time she started Project Beauty Share.

At the time, Farley owned a downtown cosmetics boutique called The Make-Up Studio.

“I was consulting with (a customer) about her makeup routine, and she had some products that were not age-appropriate,” Farley recalls. “I said, ‘There’s the garbage can, go ahead and throw them away.’ She said, ‘No, I would never do that, I volunteer at a place that would love these products.’”

The conversation got Farley thinking about women in need.

“On her next visit into the shop I said, ‘The makeup is one thing, that helps women to feel good about themselves and builds confidence, but what about the dignity? What about hygiene products?’” Farley says.

The customer told her food stamps don’t cover items like tampons or toilet paper. Farley decided then to start a nonprofit that would provide both cosmetics and hygiene items.

Project Beauty Share started in a 400-square-foot room in the basement of The Make-Up Studio. By 2015, it had outgrown that space, so Farley and her husband bought the building that houses the nonprofit, which they lease to it.

Farley says she closed The Make-Up Studio at the beginning of January in order to focus on Project Beauty Share, though she still serves a few clients. Project Beauty Share received a $30,000 grant in December from the Innovia Foundation, which funded the executive director as a paid position.

Farley says she’s still learning to ask for the items the organization needs most. Shampoo is an item Project Beauty Share often lacks, but after Farley put a request on the organization’s social media, bottles flooded in.

“We just need to ask,” she says. “My next ask will be razors and deodorants. For one organization that serves hundreds, I can put three sticks of deodorant and two packages of razors in (a bin). That’s it.”

Though Project Beauty Share doesn’t deliver bins, Farley says she’s been reaching out to organizations, such as food banks, in rural Washington towns like Republic, Chewelah, and Colville.