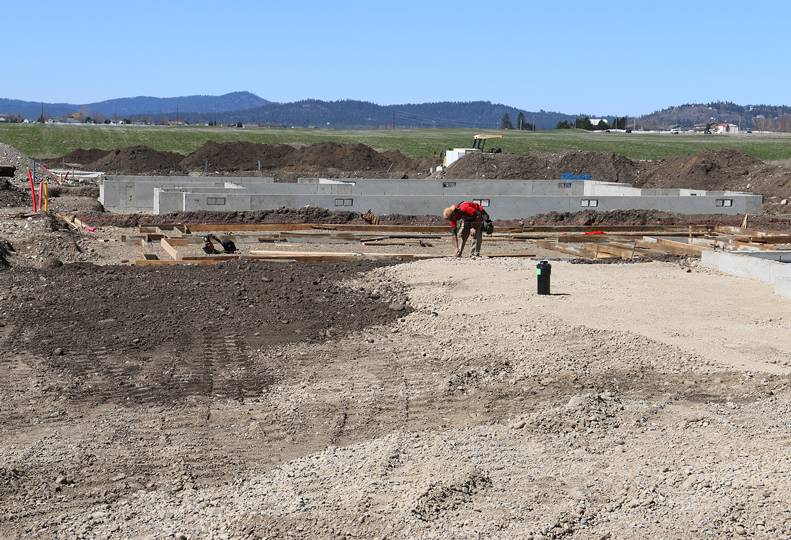 -KEVIN BLOCKER
New homes rise near the intersection of east Killdeer Avenue and north Greensferry Road in Post Falls. Applications for new subdivisions has increased more than 200% since 2016.

In response to a surge in development and population, the subject of growth management is being broached in Kootenai County.

Now, the office is seeking public comment and participation to manage growth.

David Callahan, Kootenai County community development director, says his department has fielded more calls over the last half-year from residents across the county, with their No. 1 complaint being an increase in traffic.

In 2020, Kootenai County received 109 applications for construction of small to midsized subdivisions, an increase of more than 200% compared with 2016. Most of those applications were in Post Falls.

“We’ve added about 11,670 people to the city over the last five years,” Seale says. “Where we’re at in Post Falls is that we’re trying to figure out how to best manage growth.”

Kootenai County as whole has averaged 2.5% population growth per year over the last decade.

The report starts by detailing the history of the development of growth management in the U.S. starting in the mid-1960s as many cities and towns often faced unbridled sprawl. It then details a half-dozen examples of mitigation strategies different municipalities used in order to better get a handle on growth.

The report cites the example of Woodstock, Illinois, which encourages the building of residential lots in clusters and requires developers to preserve a third of the land built upon for maintaining native vegetation.

How overlay zones, transfers of development rights, and urban growth areas are also cited as examples of tactics communities can use to get a handle on flourishing populations.

Washington state’s Office of Financial Management develops population projections for each county, which are mandated to determine, in consultation with cities, where that growth should be directed as part of their long-range planning processes.

At 65 years of age, and a career-long community planner who has worked in major metropolitan areas including Dallas, San Antonio, and Boulder, Colorado, Callahan is explicit to say it’s not his office’s position to promote or recommend any restrictions on development.

“I’m a big believer that good land-use planning has to come from the community,” says Callahan, who has been director of Kootenai County Community Development for 7 1/2 years.

The goal of the report is to present it to the community to begin the process of having discussions about what they want their cities and communities to look and feel like, he says.

The report doesn’t offer any suggestions about the most prudent path that Kootenai County should take with regard to establishing growth management policies for the future.

“It’s a listing of ideas, and nothing more than that,” Callahan says. “We don’t have any intentions of trying to force anything to anyone. We just want to be able to have a starting point for discussion, because in my experience, it’s hard to be able to make a decision in a vacuum.”

“My attempt with this white paper is to engage people where they are and have conversations about what most people want to do,” he says. “If we find that a majority of people don’t actually want growth management policies in place, then that’s where we’ll go.”

Based on his past experience, Callahan thinks the general public lacks a basic understanding of growth management principles and how they work.

Callahan says the leading complaint his office now receives as a result of the increase is Kootenai County’s increase in traffic.

Callahan says Kootenai County’s transportation system is not “up to snuff” which he says is a function of current growth outstripping funding.

Post Falls, Coeur d’Alene, Hayden, and Rathdrum are among the largest concentrations of growth in the county, he says.

COVID-19 has led to online work environments in which workers don’t have to live in the same area where their company is headquartered. Kootenai County has served as a favorable landing spot for those seeking to leave big cities, he says.

“And there’s still the existing incentive of people my age looking to retire and wanting to find a place that’s less populated and still relatively unspoiled,” Callahan says.

Regardless of what direction Kootenai County decides to take, Seale says he’s confident that Post Falls’ master plan will serve as a guide for how the city handles a burgeoning population.

“We believe, moving forward, the master plan that we’ve put in place will help to continue to maintain a quality of life that will remain high and livable for its residents,” he says.