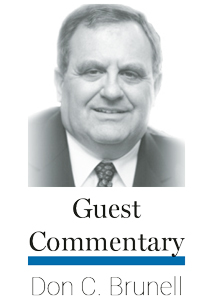 Imagine tuning into the Sunday morning talk shows and wondering if the politicians and commentators could possibly find something positive to say about one another or the state of affairs in America. Suddenly, on Oct. 20, there was a surprise: “BREAKING NEWS” moving across the bottom of the screen about an apple developed in Washington State.

Cosmic Crisp was developed in Washington specifically for our state’s climate and growing conditions.

Washington State University researchers took the disease-resistant Enterprise and combined it with the Honeycrisp, known for its crispness, juicy sweetness, and hint of tartness, to create the Cosmic Crisp.

It’s expected to challenge the Fuji and Gala—developed in Japan and New Zealand, respectively—as well as the traditional Red and Golden Delicious for market share.

With a $10.5 million advertising campaign boosting the launch, growers are betting it increases apple consumption worldwide.

“There are 12 million trees planted in the state of Washington, so this year we’ll have 450,000 boxes of Cosmic Crisp apples available,” Kathryn Grandy, the brand’s lead marketing director, said in London’s Daily Telegraph newspaper. “This is the first time anyone has made such a concerted effort to develop a variety, release it, and commit to such a large quantity.”

The best news is Washington apple growers will have exclusive rights to the Cosmic Crisp for 10 years. That’s only fitting since our state’s orchardists paid researchers at Washington State University to develop it over the last 20 years. Apple growers need a license to buy the trees and pay a royalty on sales of the fruit.

This large, juicy apple has a remarkably firm and crisp texture. It’s surprisingly sweet, holds it freshness well over a year, and doesn’t brown as quickly when cut.

“I just felt like they put all their eggs in one basket,” Barritt told Time Magazine.

Apples are a $2.5 billion business annually in Washington, which grows about 60 percent of the nation’s supply, or nearly 140 million boxes. The state has about 1,500 apple growers and 175,000 acres of orchards. About 50,000 people pick some 12 billion apples by hand each fall. The fruit is exported to 60 countries, the LA Times recently reported.

Washington is America’s fourth-biggest exporter by state behind Texas, California, and New York. In 2018, our state’s farmers and manufacturers sent $77.7 billion worth of goods around the globe. Apples accounted for $760 million – and hopefully are poised to zoom forward if new trade agreements are ratified.

Don C. Brunell is a business analyst, writer and retired president of the Association of  Washington Business. He now lives in Vancouver, Washington, and can be reached at  theBrunells@msn.com.